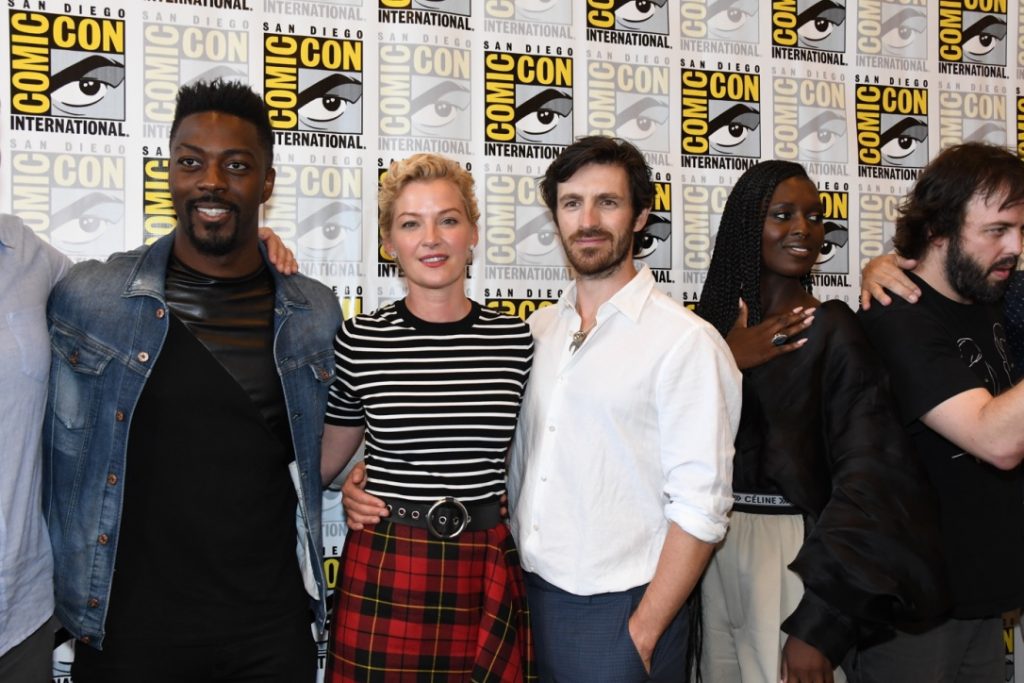 San Diego Comic-Con will also be the launch pad for the SYFY WIRE Fan Creatorsinitiative – the next phase of SYFY’s “It’s a Fan Thing” positioning. The multi-platform program will celebrate, nurture and support the makers, artists and creators at the heart of genre fandom. Beginning with an online hub dedicated to showcasing the latest and greatest in fan creations, the SYFY WIRE Fan Creators initiative will prove “It’s a Fan (Made) Thing” with year-round contests, partnerships and recognition for the best in class when it comes to being a participating fan.

“At SYFY, we know that genre fans are not mere observers, they’re passionate participants,” said Alexandra Shapiro, Executive Vice President, Marketing and Digital for SYFY and USA Network. “And so everything we do at SDCC will include remarkable creative work from fan artists and creators, from the designs on our sought-after swag bags to the décor and food at our parties.”

SYFY will bring the biggest genre stars together for 10 official panels, including eight show panels and two panels from SYFY WIRE that dissect and celebrate genre and geekdom.

15 Panels and Screenings Featuring the Biggest Names in Sci-Fi and SYFY, Including a ‘Battlestar Galactica’ Reunion A 3-Night Live TV Event Hosted by Zachary Levi, and Round-the-Clock Coverage by SYFY WIRE Fan Parties, Cosplay Karaoke Buses, Trivia Trolleys, Cosplay Repair Carts and a Sci-Fi Drumline Superfan Nuptials Officiated by Orlando Jones (Yes, really.)
NEW YORK, NY – July 5, 2017 – As SYFY celebrates its 25th anniversary and its recent brand reboot, the network is headed to San Diego Comic-Con bigger and better than ever before. In addition to 15 SYFY series panels or screenings, the network is rolling out a host of events, activations and parties designed to leave no fan behind. And SYFY will once again extend the fun to fans nationwide, with a three-night live TV event, SYFY LIVE FROM COMIC-CON, hosted by Zachary Levi.

END_OF_DOCUMENT_TOKEN_TO_BE_REPLACED

The doors for the event will open at 7:45, and the ceremonies will get under way at 8:00. Attendance at the event is free to anyone with a Comic-Con badge. Advance seating for VIPs (nominees, sponsors, presenters) and those with pro badges will begin at 7:00. The ceremony is expected to run until about 10:30. All who attend the awards ceremony will receive a graphic novel from the Will Eisner Library, published by DC Comics.

The Eisner Awards evening includes the presentation of several other special awards, given by both Comic-Con International and other organizations. Comic-Con’s own awards are the Bob Clampett Humanitarian Award, the Russ Manning Promising Newcomer Award, the Will Eisner Spirit of Comics Retailing Award, and the Bill Finger Award for Excellence in Comic Book Writing.

The Eisner Awards are part of, and underwritten by, Comic-Con International, a nonprofit educational organization dedicated to creating awareness of and appreciation for comics and related popular art forms, primarily through the presentation of conventions and events that celebrate the historic and ongoing contributions of comics to art and culture. More information about the Eisner Awards can be found at http://www.comic-con.org/cci/cci_eisners_main.php.