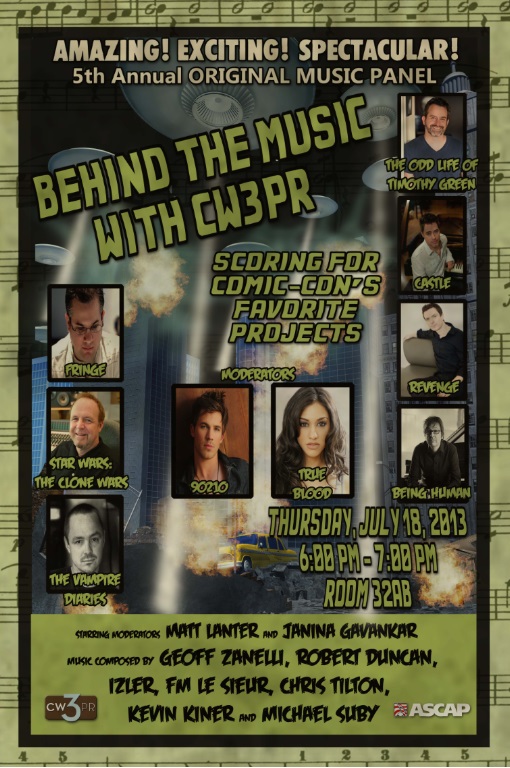 The press releases keep coming in for Comic Con 2013! This one caught my eye since it will have True Blood’s “Luna” Janina Gavankar moderating the “Behind the Music” panel
TELEVISION STARS MATT LANTER AND JANINA GAVANKAR TO MODERATE 5TH ANNUAL “BEHIND THE MUSIC WITH CW3PR” COMIC-CON PANEL FEATURING TV AND FILM’S TOP MUSICIANS
WHAT: “Behind the Music with CW3PR: Scoring for Comic-Con’s Favorite Projects” – Consistently named one of the weekend’s “must see” events, Comic-Con’s original music panel is returning to San Diego for the fifth year in a row, bigger and better than ever!“Behind the Music” brings fans closer than ever before to the musicians behind their favorite films, TV shows, and video games. In past years the panel has played host to composers behind fan-favorite projects such as “Game of Thrones”, “Spiderman”, “Glee”, “Pushing Daisies”, “Scream”, “True Blood”, “Once Upon a Time”, “The Tudors”, “Smash”, and many more.

This year, two of television’s hottest stars, and big fans of musical score, Matt Lanter (“90210” and “Star Wars: The Clone Wars”) and Janina Gavankar (“True Blood” and “Arrow”) will join top composers from TV and film’s hottest projects – including their own – and provide a unique perspective on how music plays a big part for their characters. The fifth annual popular panel is also placing a special emphasis on how aspiring musicians can find themselves writing songs, lyrics, and score for some of the most exciting projects around.

Attendees will receive exclusive giveaways and be the first to view (and hear) some surprise sneak peeks from upcoming projects. A fan-led Q&A will follow.