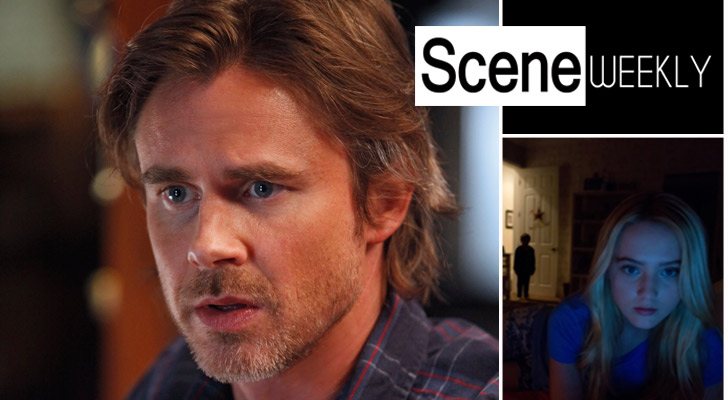 Sam Trammell’s Louisiana roots hold strong. Trammell prides himself on being the only Louisiana native on HBO’s True Blood, where he portrays shape shifting bar owner Sam Merlotte.  The show takes place and is partly filmed in Louisiana.

“I feel very connected to the show because of that,” he said. “I know the people.”

Born in New Orleans,Trammell and his family movedaround quite a bit throughout hischildhood. They spent a few yearsin Texas and North Dakota before moving back to the Big Easy for Trammell’s first few years of primary school. Then it was off to Alexandria for two years. Trammell’s father, a surgeon, eventually set up a practice in Charleston, West Virginia, where Trammell spent his middle and high school years. He attended Brown University in Rhode Island, spent a year at the University of Paris, and finally ended up in New York where he began a career in theatre. He lived there for about ten years before settling in Los Angeles, where he currently resides helped Trammell form part of his character for the upcoming film White Rabbit.

“There were a lot of little bits and pieces I used to put this guy together,” said Trammell. “When I was young and playing little league, just some men that I knew when I was a little bit younger kind of started to trickle over me. There’s that feeling, that southern feeling, that I grew up with, and of course that’s a big part of who he is.”

In White Rabbit, Trammell plays the father of the film’s main character, a troubled teen named Harlon who uses comic books to escape from reality, also suffering from hallucinations. These visions begin when Trammell’s character takes his boy hunting and shoots a white rabbit. Instead of killing it he leaves the animal lying there to suffer.

The character is rural and uneducated, an alcoholic and drug addict. Trammell spent a lot of time researching crystal meth and how it affects those who are addicted and their families.

“You hallucinate on meth as well, so I was hallucinating in my own way in a couple of scenes,” he said. “I had to look at drug users. And then, he’s also an alcoholic. And he’s born again, so there are a lot of different facets to him that I sort of fused together.” 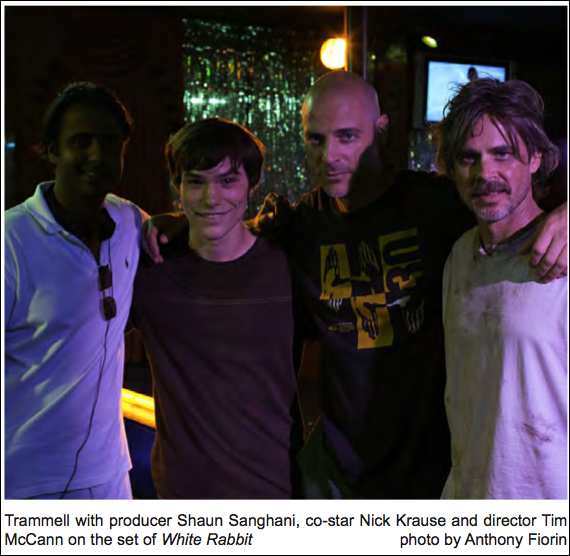 “I think it will be pretty controversial,” Trammell said of the film. “It’s got some really nice humor in it as well, but it’s a pretty dark story.” Almost all of White Rabbit was shot in LaPlace. Filming wrapped less than two weeks before Hurricane Isaac struck, and some of the film’s locations flooded shortly after. “I couldn’t believe it. I didn’t even read it, my father told me. We shot a lot of stuff out there,” Trammell said. “We were out in the woods, we were in a church, we were at somebody’s house. We were out there a lot.” Isaac did not affect the film, which is currently in post-production and looking at a 2013 release date. If Trammell’s attitude toward White Rabbit is any indicator, then we definitely have something to look forward to. “It’s going to be incredible,” says Trammell. “I have to say, it was one of my favorite parts that I’ve ever done.”

The imdb page for the film is here: 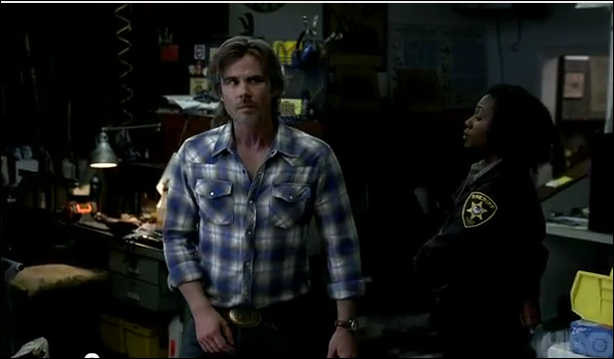 The third new video is out for episode 5.07. This promo features one of my favorite characters on the show who does not have a lot of air time! Tanya Wright as Bon Temps’ finest-Kenya!! She watches as Sam sniffs out something and uses his special shifter powers!

True Blood’s season 4 will start on June 26, 2011 but fans had a chance to see the “Invitation to the Set” video this past Sunday. The screen caps from the video can be found on the site. I discussed some of the clues I noticed when looking at the images in the prior post. Here are a few more possible “clues” I noted. SPOILER ALERT…OK…MAJOR POSSIBLE SPOILERS..so if you don’t want to be spoiled…don’t look..Of course all my conjectures I could be way off.

Sam Trammell is shown in image above and the action for this scene does take place at Merlottes. I did notice that there is a blonde lady seated in one of the booths and it appears that Sam is walking towards her and he does not look very happy to see her.  (the person is seated almost in front of the camera). This looks a lot like Maxine Fortenberry to me. (same hairdo). Makes me wonder just what is Hoyt’s mamma doing there? Could she be there to find out about when Jessica starts a shift? I worry about what is Maxine going to do with the gun she was trying out in the season 3 finale. (it looks like a special anti-vampire gun with wooden bullets endorsed by good old Reverend Steve Newlin)

There are also 2 women seated at the bar over to the right of the first image. There is a blonde, and a dark haired woman. The blonde at first I thought might be Sookie but I don’t see a Merlotte’s waitress uniform. Not sure who they are in the image.

There are a few images showing what appears to be a priest performing a ceremony (he’s holding a crucifix- the one I believe is shown in the blog entry for “Inside True Blood” link here). There are women who appear to be praying/chanting. I believe this scene is for the flashback scene that is mentioned in casting call for episode 4.05 which called for a “Head priest” seen in a flashback to 1610, he instigates the burning of a witch at a medieval church, and he clearly takes pleasure in describing the procedure. The images show a flash of light perhaps he is performing an exorcism and also burning the witch? Marnie’s character is supposed to be possessed by the spirit of a powerful witch. Could this flash back be showing fans where that very same powerful witch met her demise?

Stephen Moyer talking about the powers of the necromancer. Bill Compton in a suit and tie? Flashback scene or perhaps dealing with new duties?

In the Invitation to the Set video we see many of the cast talking about how season 4 will definitely involve witches. (not a surprise) Alan Ball also states “it’s all about Necromancy”.  Necromancy is a form of magic in which the practitioner seeks to summon the spirit of a deceased person, either as an apparition or ghost, or to raise them bodily, for the purpose of divination. Stephen Moyer continues with the discussion on how the necromancer is able to bring the “dead back to life”; if they can control the dead they can control vampires.  This character is definitely one that gives me some worry for the vampires and makes them very vulnerable. The Waiting Sucks video #4-features Bill stressing the danger of having these beings who can control the dead (and thereby control vampires).

The big question of whether or not Eric would have amnesia for Season 4 was pretty much answered in this video. Right after Deborah Woll says even though vampires are strong they can be hurt and even killed. Witches can cast a spell on vampires (from a distance) Next frame on the video show Eric shirtless and disheveled walking on the road.

He appears not to know who Sookie (or who he is) is so yes..Eric will have amnesia as the result of a certain spell. The fact that there is an episode title for season 4 with the tentative title of  “Spellbound” was another “clue”. The casting call for episode 4.08 shows that Alan Ball wrote this episode.  So yes there are many many clues that are being woven for fans in this video and in the “Waiting Sucks’ videos. Perhaps even the “Inside True Blood” blog is teasing fans with a few other clues for Season 4. (it is definitely worthwhile to go and read some of the recent posts for this month. ( hint hint…cough cough…..I spy a major possible spoiler there!)

Yes waiting sucks so instead of whining I’m having fun trying to find possible clues. Hey I could be wrong but at least it helps the time go by quicker. Hope you enjoyed part 2. I will be posting another entry focusing on the “Moments” trailer video that was shown before the Game of the Thrones premiere on Sunday 4/17/11. (I spy where Sookie went at the end of season 3 finale)

Oh and I haven’t forgotten about the scenes with Sam and Luna or Jason and Crystal. I’m going to discuss those with the “Moments” video next. The “Moments” video had a bit more to show than the “Invitation” video.

All of the screen caps for the Invitation to the set video can be found on this site link here: (under the Screen caps heading)

The screen caps for the “Waiting Sucks videos” are organized by video and can be found here: