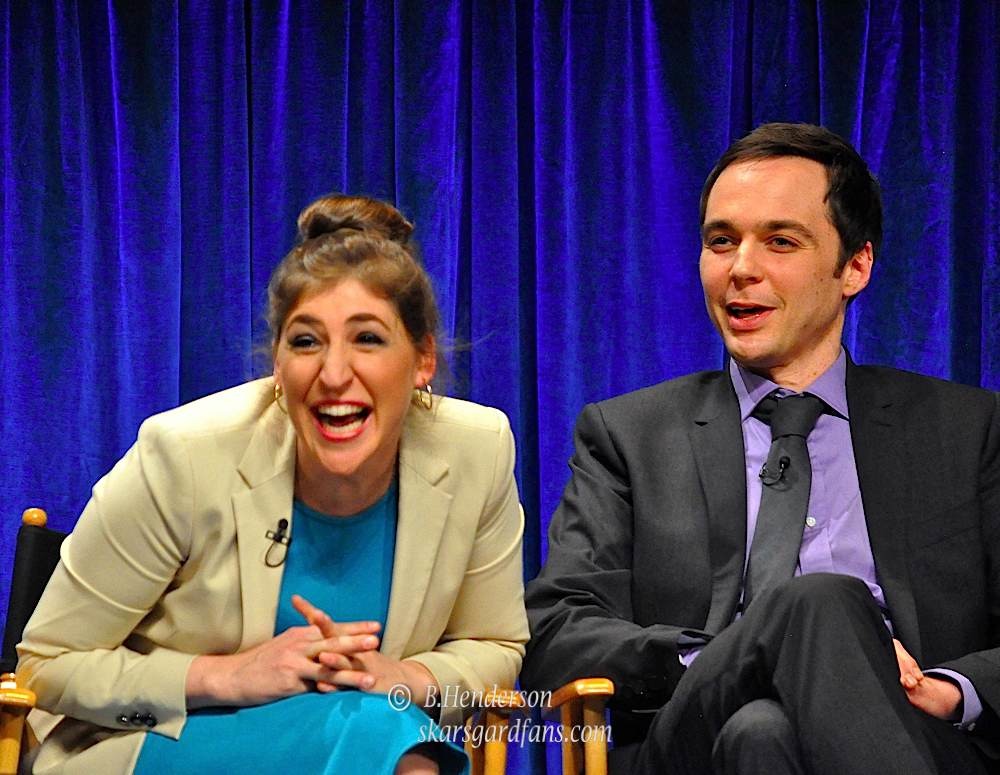 PaleyFest 2013 presented the cast and producers of “The Big Bang Theory” last night at the Saban Theater. I had a blast at the panel. The cast really were appreciative of all the fans who lined up for hours last night. This panel was one of the first ones to sell out.

EW.com posted the highlights of the panel. Images in the gallery below were taken by site admin.

Sheldon Cooper, Leonard Hofstadter, and Raj Koothrappali may not be doctors of the medical sort, but they still know how to serve up a heaping dosage of best medicine (a.k.a. laughs — lots of them) to a sold-out audience. At least, that’s what their real-life counterparts — along with other cast members and writer-producers of The Big Bang Theory — did Wednesday evening for the CBS comedy’s PaleyFest panel in Beverly Hills’ Saban Theatre.

The event, presented by the Paley Center for Media, was pretty short on spoilers. The production schedule is currently not that far ahead of viewers, who will get to see the 19th episode of season 6 tonight, but there were plenty of entertaining and funny behind-the-scenes stories and playful moments among the talent on the panel, which was moderated byNCIS actress Pauley Perrette.

Read on for 10 highlights from the Big Bang Theory panel. 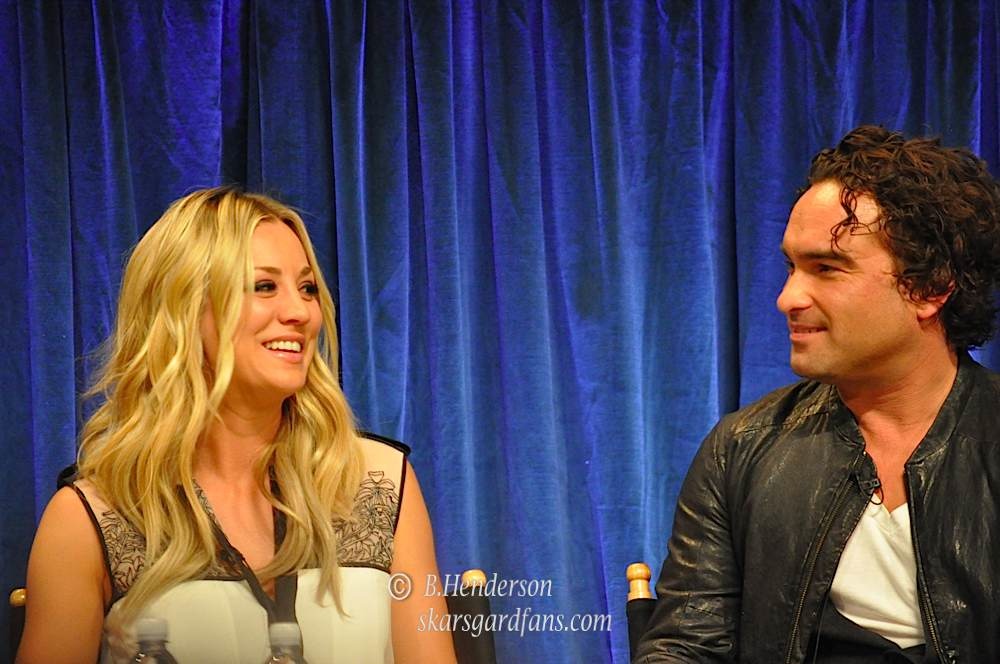 1. The scene when Penny first tells Leonard “I love you” was shot in only one take
Kaley Cuoco (Penny), whose face brightened with a big grin when asked about this scene, revealed that she and Johnny Galecki (Leonard) pulled it off in just one “very special take.” Executive producer Steven Molaro recalled telling the two actors, “‘That was beautiful. It’s never gonna be better than that,’ and then Kaley said to Johnny, ‘I don’t know about you, but we started the scene, and it was like the audience went away and the cameras went away and it was just us.’” – and that got a big “awww” out of the PaleyFest crowd.

GET MORE EW: Subscribe to the magazine for only 33¢ an issue!

2. Everybody loves Lucy
The cast and writers seem to be having a fun time with Kate Micucci aboard the show playing Raj’s (sort of) girlfriend, Lucy. “It’s really fun playing opposite an actress that is talented and really listens and reacts,” Kunal Nayyar (Raj) told EW in the press tent before the panel. Inside the Saban Theatre, he told the crowd that he has enjoyed this storyline “because you play a character for six years, and in my case, you grow affection for that character. You really want to see that character succeed. It’s really lovely to see him explore that side of him, which I think has been missed for so long while he’s been seeing the growth of his friends.” Co-creator Chuck Lorre told EW that Raj and Lucy’s recent texting date won’t be the last time we see them come up with a creative way to communicate, but Raj will also “continue to rely on demon rum to help him overcome his shyness.” He’s not going to let that pesky selective mutism get in his way! 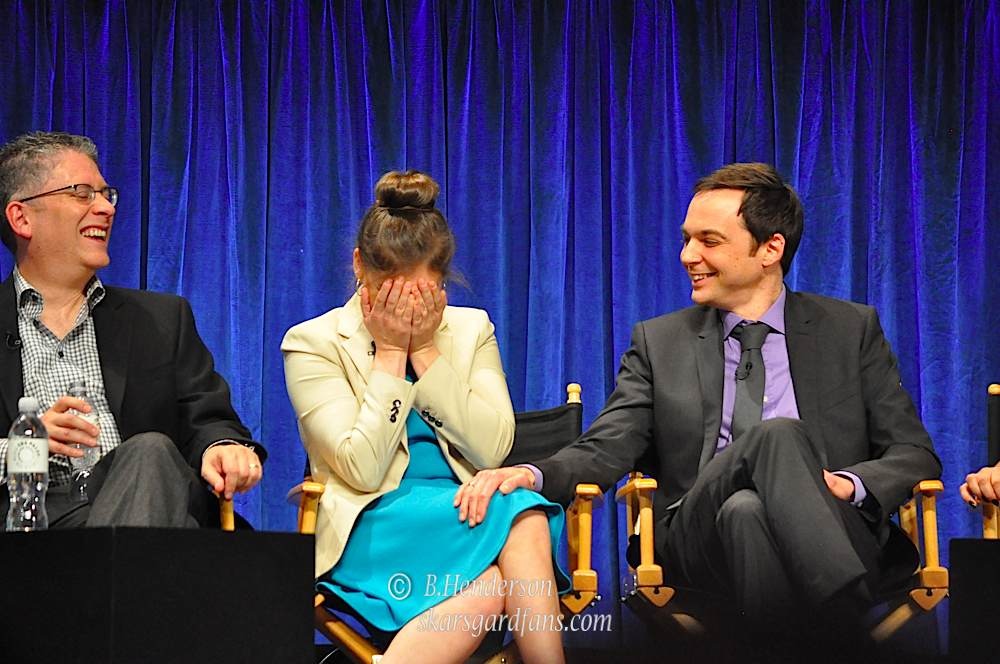 3. That spanking scene
Sheldon went old school with his punishment for Amy when she lied about being sick. Though “punishment” isn’t exactly how the delighted Amy thought of the near-BDSM experience. Jim Parsons (Sheldon) revealed that while the spanking was always in the script for that December 2012 episode, it was originally planned to be off-camera. The original gag had Amy’s spanking, along with two other points of the episode, paired with the image of Amy’s monkey mimicking the image of “see no evil,” “hear no evil” and then “speak no evil.” Ultimately, once the writers decided to put the spanking on-camera, Parsons found the scene “one of the hardest things I’ve had to do — because it was so amusing.” After Cuoco and Galecki recalled the shot needing several takes, Mayim Bialik (Amy) confessed, “There was some redness!”

4. How did last fall’s flash mob come together?
When the cast and crew surprised their studio audience — and their producers — with a flash mob dance last October, it was the result of two weeks of rehearsals. The idea was Cuoco’s, who recruited her sister to do the choreography. As for that back-spin of Galecki’s, the actor had originally expressed no interest in participating, but “I saw their last rehearsal, and after rolling my eyes for two weeks, I said, ‘I really want to be a part of this,’” Galecki recalled. He didn’t have time to learn the whole dance, but he contributed his move that he “usually save[s] for weddings.”

5. We may see Sheldon’s Meemaw in a future episode
When an audience member questioned the producers about Sheldon’s oft-talked-about but yet-to-be-seen grandmother, Molaro said, “We’ve talked about [having her appear on the show]. I certainly don’t rule it out. I don’t know how she’d feel about Amy.” When that last comment was met with nervous laughter and hmms from the audience, Molaro quickly followed up: “She loves Amy! She will love Amy!”

6. How does one call up George Takei to ask him to do that scene?
When the writers created the scene in which Howard has a dream about Battlestar Galacticahottie Katee Sackhoff that is soon interrupted by George Takei, the task of calling up the celebrated Star Trek actor about the guest spot fell to co-creator Bill Prady. “We wrote a line of Howard saying, ‘I’m so confused’ and thought it’d be really funny if George Takei said, ‘Confused? Perhaps I can help.’” Prady said. “How do I say to this guy that he’s a possible homosexual fantasy? … Finally I said, ‘Alright, so you know you’re gay, right?’ and he said,” — cue George Takei accent — “’That’s news. I’ll tell my husband.’”

7. Tonight’s episode is a touching and emotional one
Tonight’s episode, titled “The Closet Reconfiguration,” centers around a discovery Sheldon makes when reorganizing Bernadette and Howard’s closet: He unwittingly opens a letter from Howard’s father (who abandoned Howard and Mrs. Wolowitz when he was a kid) that our favorite diminutive engineer has never braved opening and reading in all the time since he received it at age 18. It’s an emotion-filled episode, the cast said, that features each character supporting Howard through the tough situation in their own way. “You get to see how good [Howard’s] friends really are and how kind of fallible they are and yet unflappable. They don’t change. But everybody is coming from a sweet, good place,” Simon Helberg (Howard) told EW. “They’re all put in a position to figure out how to best support their friend,” Galecki told EW. “It’s a sensitive issue, and I think the conclusion that they come to is really smart and unique and has never been done on television before. It’s one of my favorite episodes, I swear to God. I’m not just saying that because it’s airing tomorrow! It really is.”

8. How will the season 6 finale compare to last season’s big closer?
“That was pretty big,” Lorre said to EW of the season 5 finale. “A wedding and a Russian rocket into space is pretty big. I think we can safely say this [year’s finale] will be smaller, more intimate.” 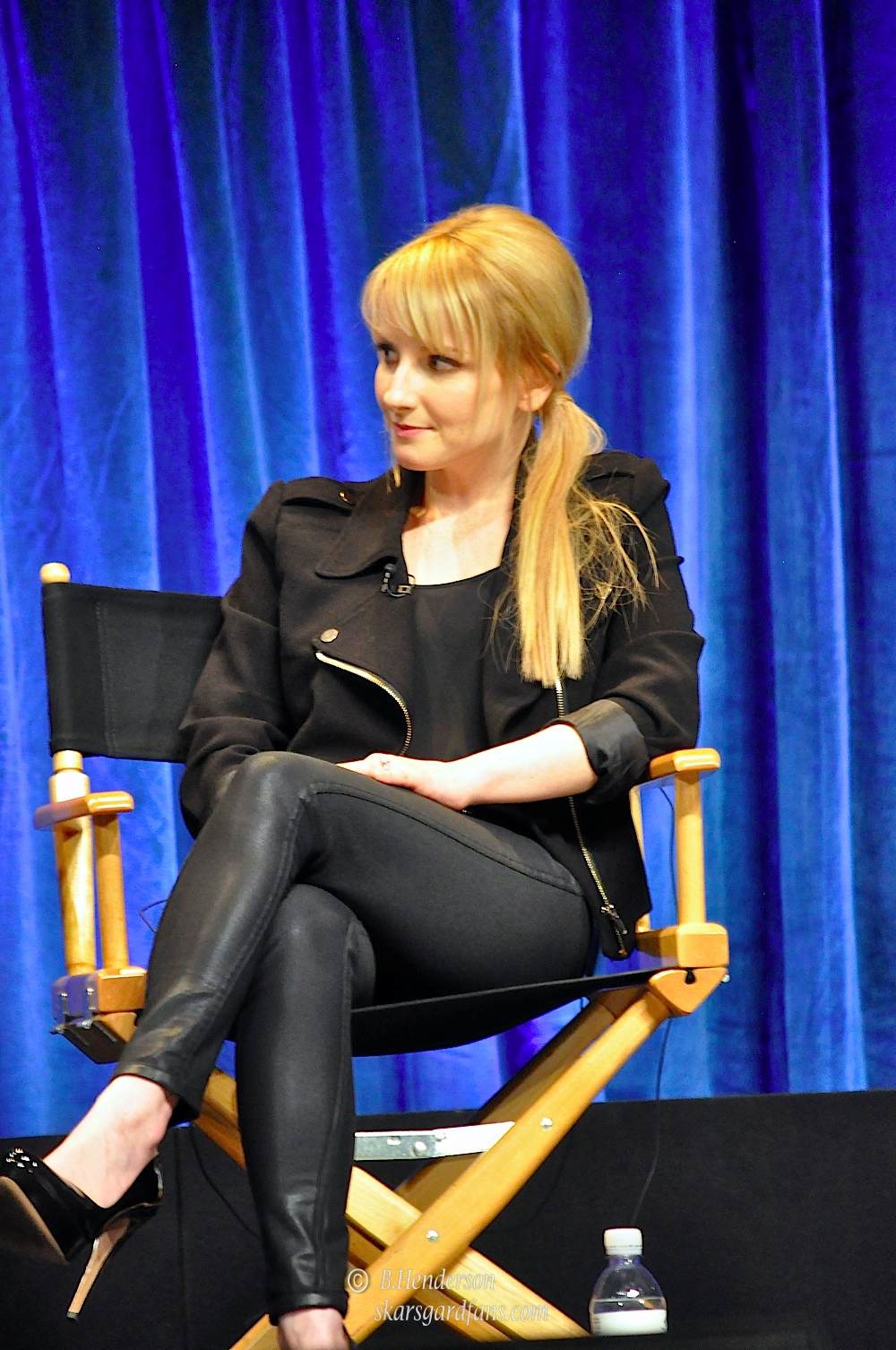 9. The tale of Melissa Rauch’s “Smurfette”
The biggest applause of the night was saved for the hilarious Melissa Rauch (Bernadette), both when she impersonated Howard’s mother’s voice, and when she told a story about getting her makeup removed following the day of shooting this season’s Halloween episode. Getting off all that blue Smurf makeup required some hot towels and the work of Rauch’s regular makeup artist and two assistants, both of whom were men. “It was getting late, and I’m starting to fall asleep,” Rauch recalled, “and I lifted my legs up to get the rest of the makeup off and heard the guy laugh and thought, ‘Oh, they’re just telling jokes.’ But then I looked in the mirror and thought, ‘What’s that?! Dear Lord Jesus, that’s my business!’ I had totally exposed myself! I put my legs down and just said to them, ‘Long night!’ That is the tale of my Smurfette!” 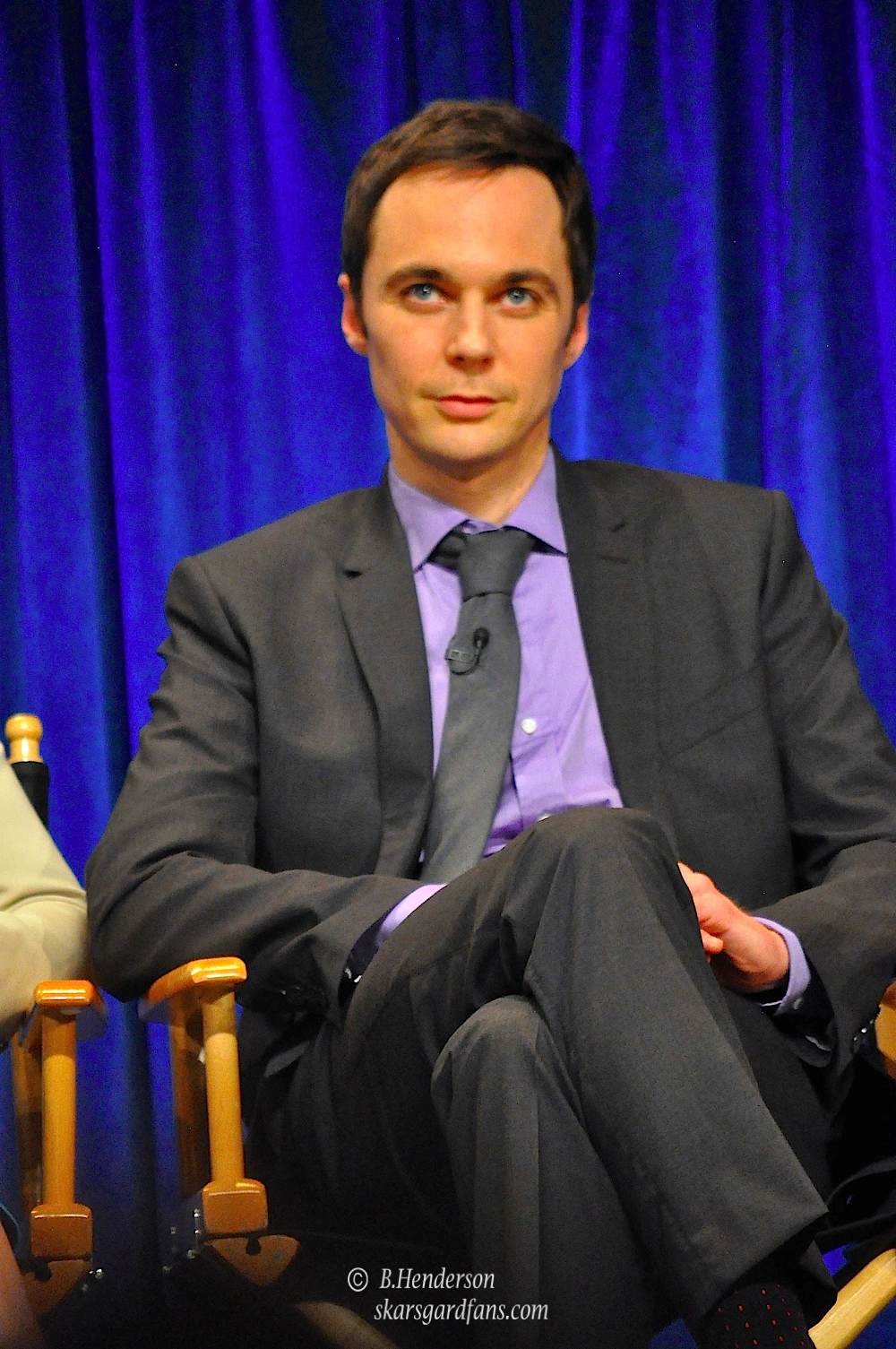 10. Where did ‘bazinga’ come from?
Sheldon’s catchphrase now beloved by fans and nerdy T-shirt companies everywhere got its start as now-showrunner Steven Molaro’s catchphrase. Prady told the audience that during the show’s second season, Molaro would use the word to mean “gotcha” when he pulled a trick on a fellow writer. A “bazinga” was in order, for example, when Molaro gave Prady a grapefruit that turned out to be hollowed out then carefully taped back together. And that’s how the catchphrase of smug, trickster Sheldon was born. 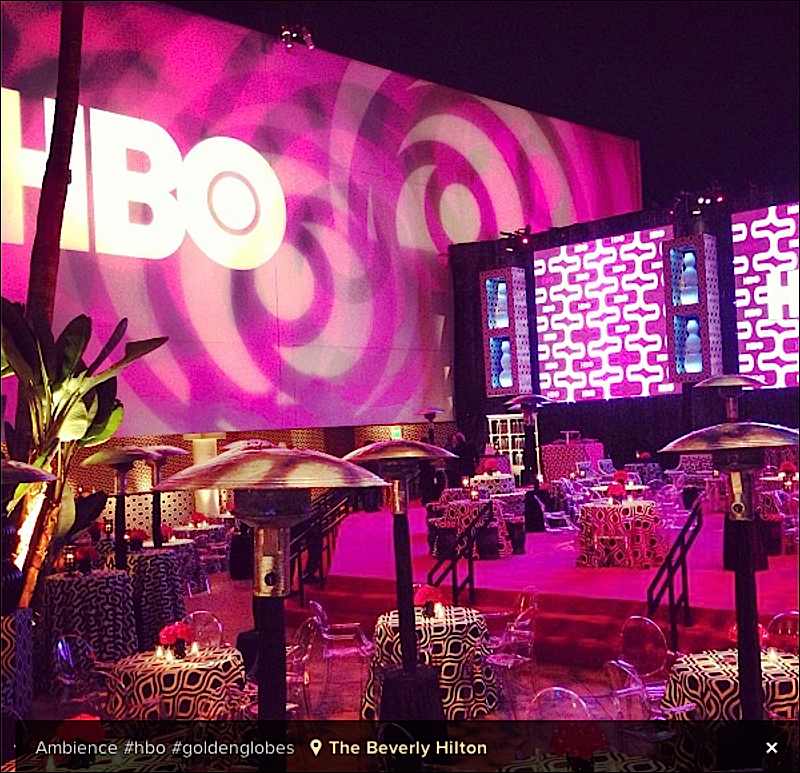 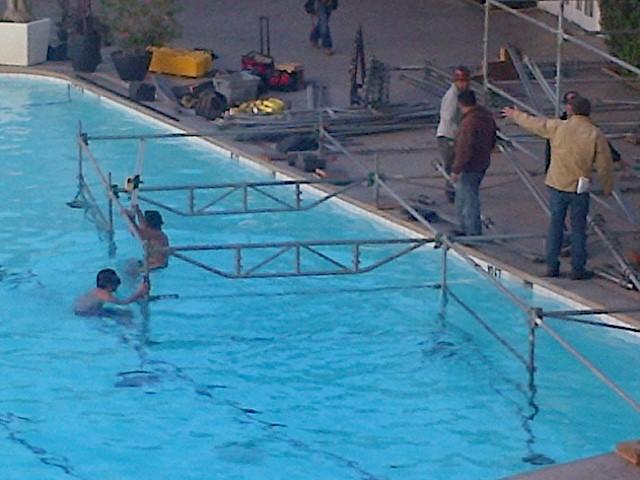 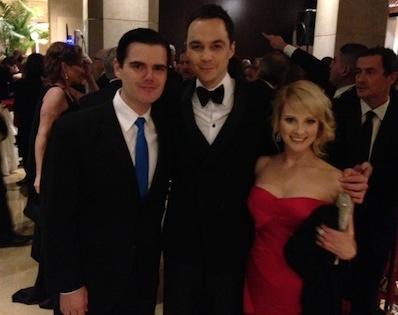 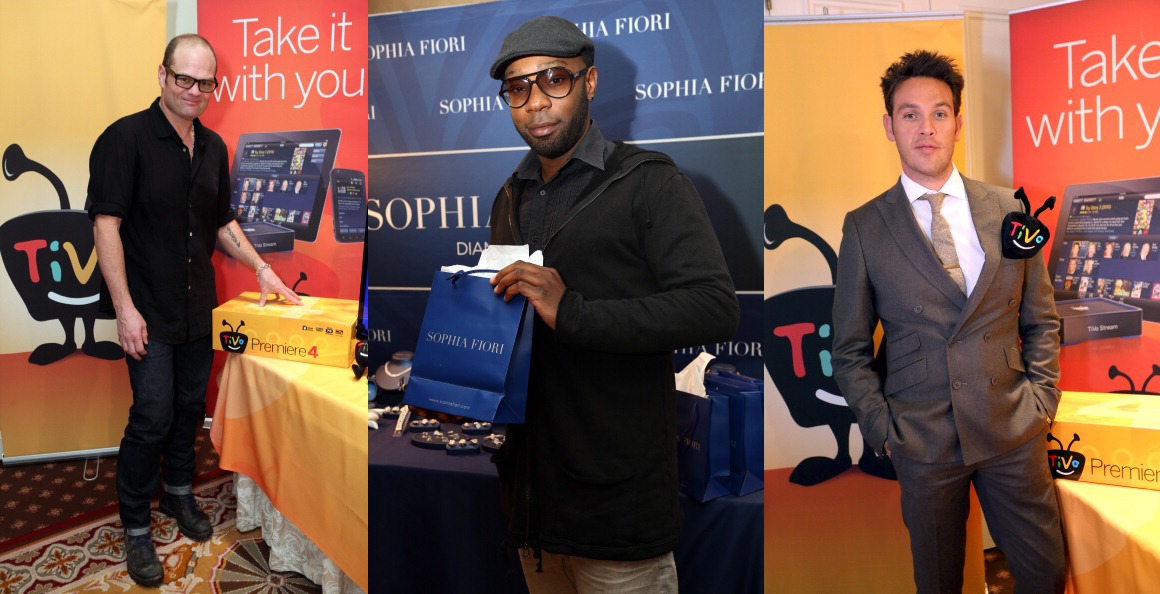