A new True Blood season 5 image featured on the HBO website. This one shows Jason Stackhouse looking surprised. This is for episode 52 – 5.04. What is making Jason look so surprised? Waiting sucks! The new season will premiere on June 10, 2012.

The images released to date are in the gallery below:

Fans finally had the chance to see the season 4 premiere of True Blood last night. HBOGo customers were also able to view the second episode as well! Now if that doesn’t give a fan a fangy over load and a definite fangover I don’t know what will.

Here are some possible cures for the post True Blood Sunday fangover: SPOILER ALERT Yes images are spoilers for those who have not watched episode 4.02!

Yes finally Eric Northman fans were able to see a gift for Sookie from Eric. When Sookie arrives at her newly renovated home she sees a few new items. Of course Sookie is not amused. Notice the note on the door “Out with the old” . Perhaps a bit of foreshadowing in that little note? (most definitely).

Now why would Eric be giving Sookie a microwave? Hmmm let me think well perhaps to heat up a bit of blood for him? Too bad Sookie finds Eric’s carafe in her fridge and dumps it out.

For some reason I remember that a certain type of blood might need to be aerated? Does Eric drink some of the special royalty blend?

The look on Sookie’s face is priceless when she discovers that Eric has built himself a hidey hole. And what a decent sized hidey hole it appears to be! We even get to see some of Eric in that hidey hole in episode 4.03 (from the snippet of trailer shown last night)

No matter how fanged out fans may feel at least they don’t have to worry about their babies having supernatural powers. Worries like that are enough to keep Arlene a bit more skittish! I really don’t like how they are going down this path that the baby is “evil” just because his father was a serial killer. The baby is adorable!

Love the one You’re With?

Another possible cure for the fangover is to relax and love the one you’re with! Even Bill Compton has learned to move on without Sookie. It was a bit of a shock to discover just all that Bill has ascended to the year Sookie was missing. What was also a shocker was just who was doing the “loving” with Bill! Yes indeed. Looks like something WITCHY this ways does come!  (sorry my bad..couldn’t resist) Still wonder why did Bill have Eric handle that situation personally? Hmmmm…

Another interesting “tidbit” for Bill came out in the 80’s flashback scene. Very interesting indeed! Bill a SPY?

Lick the Fangover Away?

Who would have ever guessed we would hear Jason Stackhouse say he was more of a “band aid” kinda guy? Honestly I could not help but chuckle a little bit when I saw Timbo licking Jason’s wounds. Sad that Jason was so hurt but the visual of Timbo trying to clean his wound was funny. Timbo looked much like a momma cat tending to a kitten. (a bit more foreshadowing?) The Hotshot residents really have not been shown in a favorable light on True Blood. Poor Jason!  Little did he know that having a guy lick you on the head would be the least of his worries!

Waiting for the new season has indeed SUCKED! Let’s enjoy the time we have with season 4 since we all know that time does fly by just as Sookie Stackhouse! Seriously though there is quite a lot of action coming up for fans in the new season. I’m keeping fingers and fangs crossed that all the little seeds sown by Alan Ball and the amazing cast of True Blood will soon bloom into something great.

Bill Compton covered in a bit of "royalty"

No matter how awful a fangover fans may be having today at least they are not covered in ………………SPOILER (Queen). RIP QSA at least you went out in style. 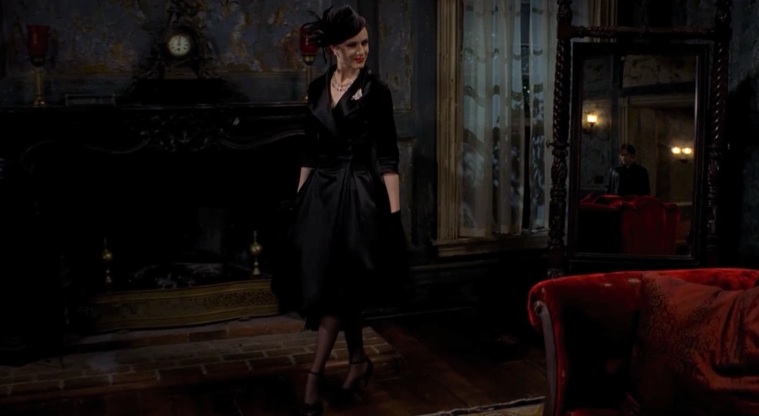 Entertainment Weekly is giving us some new spoilers for Season 4:

Hi. I am a HUGE fan of True Blood. I know this season is primarily about Sookie/Eric, but this Bill fan wants to know if the former couple will have any decent scenes together as well? Will Bill be pursuing Sookie or is he too busy with his new power position? — CK

I know you’ve seen the first eight minutes, but the next eight will definitely answer your question about whether Bill cares or not. That said, Bill’s storyline is sometimes very twisted, but mostly just full of twists.

I’m gonna be selfish here by not asking for couple news. All I want is Eric! If not Eric, Alcide will do. Have your pick, thanks. — Shaden

Eric is constantly underestimated, and he’ll prove that in the first episode when he comes into possession of something extremely valuable. Also, episode 2 has some pretty great Eric moments, especially the last scene.

Let’s get some scoop on Jason, please! Bill, Sookie, Eric — love ‘em all. But haven’t heard a thing about Jason! — Gloria

Ryan Kwanten has talked about some dark and disturbing scenes that are in Jason’s future, and he was right on point. One scene in episode 2 might even require eye covering if you’re squeamish.

This image has been out for a little bit by now. I cropped out the fan and one of the cast members. (don’t want to upset the powers that be at HBO). It was taken on the set during filming of Season 4 of True Blood. (found online in a tumblr account a huge thanks to Sookieverse blog for the find!). It shows Alexander wearing a blue flannel shirt. This shirt seemed very familiar to me and yes it does give hope that season 4 will include some of the book “action”. The action I believe we might see is perhaps a certain amnesiac Eric wearing clothing that belong to Jason (or perhaps clothing that Jason is sent out to buy by Sookie). The shirt did look familiar for a reason. I found a screen cap from Season 2 episode 10 where Jason and Sookie return to Bon Temps to discover it quite a mess after the Maenad’s influence. shown below:

If it is not the same shirt it sure looks like one very much like it. Either way it will be fun to see just why Eric is wearing this and why is he in Sookie’s house! Waiting sucks but at least finding goodies like this photo make the wait a little more bearable.

Waiting sucks but fans were treated to another short teaser video. This one features Jason and Crystal. (screen cap above is from the video). Poor Jason. I don’t think this is his preferred way to be “tied up” to a bed.