The FX Fearless Forum Space Located at the Hilton Bayfront Park Will Also Host Themed Activations From What We Do in the Shadows, It’s Always Sunny in Philadelphia, Archer, and a Nightly Projection Stunt From BARTKRESA studio and FX Design

FX Fearless Forum takes over the network’s traditional space adjacent to the Convention Center at this year’s annual San Diego Comic-Con and will also feature activations including the What We Do in the Shadows Lair, It’s Always Sunny in Philadelphia Sunscreen Zone, and the Archer O2 Station.
END_OF_DOCUMENT_TOKEN_TO_BE_REPLACED

LOS ANGELES (July 5, 2018) – FX Networks announced today the return of FXhibition to San Diego Comic-Con, which will bring the networks’ buzziest and most beloved shows to life through an interactive combination of art and technology. Taking center stage once again on the lawn of the Hilton San Diego Bayfront Hotel, FXhibition 2018 will incorporate Near Field Communication (NFC) technology for the first time as part of innovative installations from hit shows such as Legion, American Horror Story, Mayans M.C. and Archer. Fans may register in advance at FXSDCC.com and use NFC on-site to record each moment of their personalized journey through the space, which will be captured in a virtual online gallery. FXhibition will be open to the public as follows:
· Thursday July 19th, 12pm – 6pm
· Friday July 20th, 10am – 6pm
· Saturday July 21st, 10am – 6pm
· Sunday July 22nd, 10am – 2pm END_OF_DOCUMENT_TOKEN_TO_BE_REPLACED

LOS ANGELES, June 25, 2018 – FX Networks will have a major presence at San Diego Comic-Con this summer with the Emmy Award®-winning animated comedy series Archer, the highly-anticipated new drama series Mayans M.C., and the acclaimed drama series Legion. Always among the most popular draws of the annual show, the FX Networks sessions will include panel discussions with producers and actors, exclusive footage and more. The schedule is as follows:

Coming off its ninth hit season, FXX’s Archer will feature a panel discussion and Q&A on Friday, July 20 from 5:15 p.m. – 6:15 p.m. in the Indigo Ballroom of the Hilton San Diego Bayfront Hotel.

END_OF_DOCUMENT_TOKEN_TO_BE_REPLACED 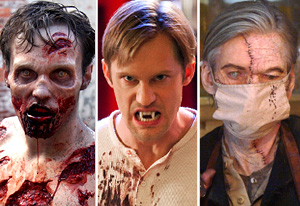 True Blood fans are left waiting for something else to satisfy their need for new “blood”. Perhaps the new show that is premiering today on FX “American Horror Story” will satisfy that need. TV Guide posed that question today in their online article “will American Horror Story be a hit for FX?” Their article also took a look at the recent history of horror on TV. (and yes True Blood was featured) The image above shows 3 images from 3 different horror shows- Walking Dead, True Blood and Supernatural.

Here is an excerpt of their article:

[box] Historically, horror hasn’t scared up a great track record on TV. Supernatural series? Yes. Terrifying ones? No. The good news for FX, which on Wednesday launches American Horror Story, is that audiences seem to be growing braver. Millions have dared to peek out from behind their fingers, making hits out of The Walking Dead and True Blood. Even when Nip/Tuck dipped its scalpels into overt horror — terrorizing us with sadistic serial killer The Carver — it drew record numbers to FX.

But do viewers have the stomach for a haunted house dreamed up by Ryan Murphy and Brad Falchuk, who gave us both Glee and Nip/Tuck? American Horror Story’s got veteran actors Connie Britton, Dylan McDermott and Jessica Lange, but also a homicidal basement-dwelling creature, angry twin redheads, an enigmatic, er, spirit in a fetish suit, demonic murals, a grotesque burn victim… and that’s just in the first episode.

A year later, NBC tried out Wes Craven and Robert Englund’s Nightmare Café, a weekly cross between Nightmare on Elm Street and The Twilight Zone that lasted just six episodes. Something more sinister arrived in 1995, when CBS unleashed the bone-chilling, genre-bender American Gothic starring Gary Cole as an immoral sheriff — read: murderous maniac — of a creepy small town in South Carolina. Critics raved, but a too-small audience forced the network to drop it after a season. [/box]

American Horror Story will air on FX 10/5/11 at 10pm. I will be watching! They have an interactive online site here where you can explore the home. It has been quite a lot of fun checking out their site to see if they have opened up new “rooms” on the site. Getglue also has limited edition stickers fans can earn based on their check-ins to the show.

Here is a review of the show from Trubookies:  Waiting for season 5 of True Blood sucks but at least with this new show and the premiere of Walking Dead coming soon the waiting will be less painful. American Horror Story site has a full set of clips and behind the scenes videos here: 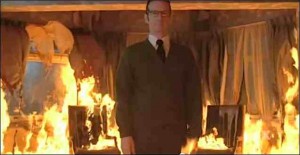 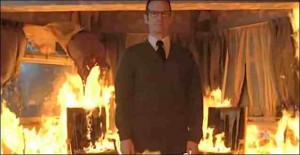 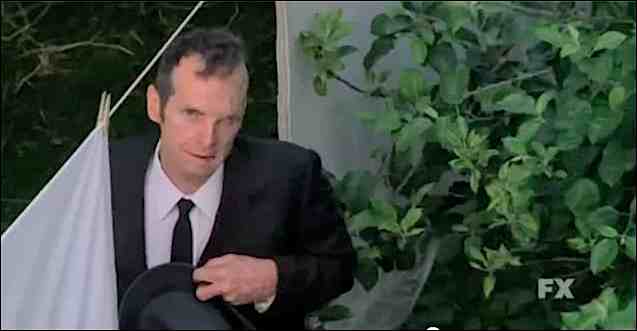 True Blood’s very own Denis O’Hare has a role in the new show. He will play the role of “Larry the burn guy” in the season premiere. (screencaps above are of Denis in his role from a trailer from FX)