True Blood’s  Tanya Wright held her film’s movie premiere at the Langston Hughes African American Film Festival on Saturday May 7, 2011.  Her film “Butterfly Rising” is based on the book that Ms. Wright wrote. The book was a major accomplishment for the talented actress who proved that not only can she act but can also write! The film synopsis :

When her brother dies, singer Lilah Belle sets out to escape her grief and embarks on a road trip, but not before coaxing the new-to-town, most scandalous woman in Artesia—Rose Johnson—to go with her. These two broken souls steal a vintage truck and head out on the open road to a fated encounter with the mythical, magical ‘Lazarus of the Butterflies.’ What occurs with the strange Butterfly Man transforms their destinies and binds the women together—forever…

The photos in the gallery are from the film premiere held at the LHAFF this past weekend. She looks beautiful and yes very very happy to finally have the film out there for all the fans to enjoy. The book was a moving an touching story for me to read and I know I can’t wait to see the film. It seems like yesterday when I had the chance to chat with Ms. Wright and she spoke about the book and how it was being made into a film (that she was directing). I am so happy for her now that the film is done and out for the public to enjoy. I hope that the film will have a wide release and can’t wait to see it for myself.

Here is a link to the film’s website: Butterfly Rising Movie 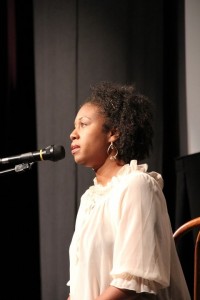