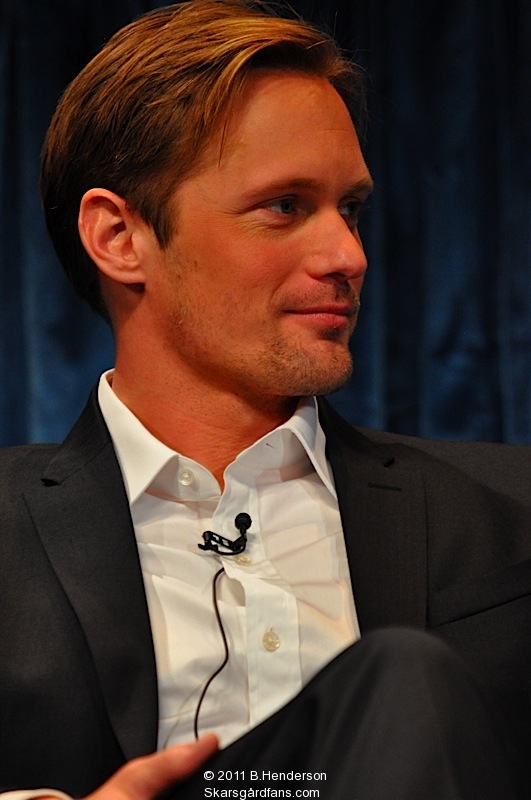 PaleyFest 2011 held an amazing panel for True Blood on Saturday 3/5/11. I had the wonderful pleasure of attending this event with several friends who flew in from many parts of the US. That is what is amazing about the show True Blood and the fans who will spend hours getting here just to be able to spend some time with the cast.

The evening started with a Paley Center Archive video featuring the pilot of “Buffy the Vampire Slayer”. Following the Buffy clip, fans enjoyed a video reel of the first three seasons of True Blood. The clip featured some of the more memorable scenes from the first 3 seasons. (the first time Sookie meets Bill got a lot of awwws from the  Bill/Sookie fans) The panel moderator , Debra Birnbaum, editor-in-chief ofTV Guide asked fans in attendance whether they were “Team Bill” or “Team Eric”. Based on the louder decibel level from the fans in the theater it was a resounding TEAM ERIC crowd! I was seated directly in front of some Bill fans and they did a fine job of showing their disagreement! (I know I can be very very loud but dang their yelling in my ear did get a bit comical!)

Not that I felt bad about that but it was a little embarassing for Alexander Skarsgard! As he sat down to take his seat he looked around at the crowd and did a little whew and oh boy it is a bit much look on his face! (images below) 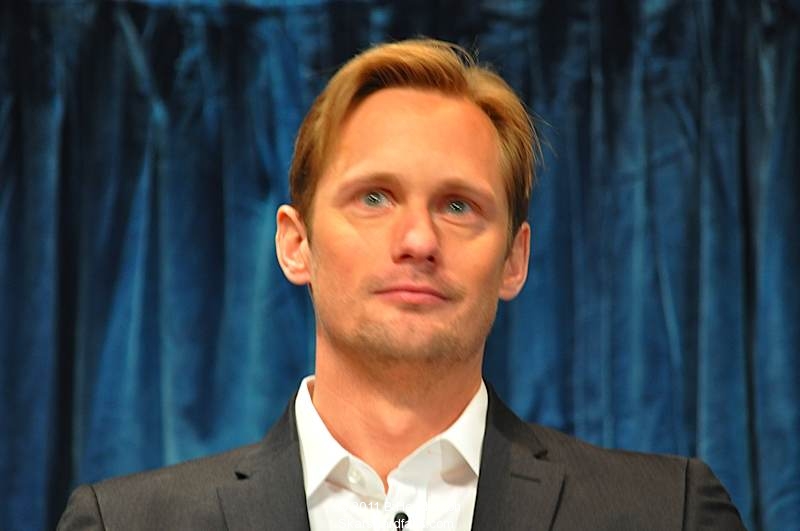 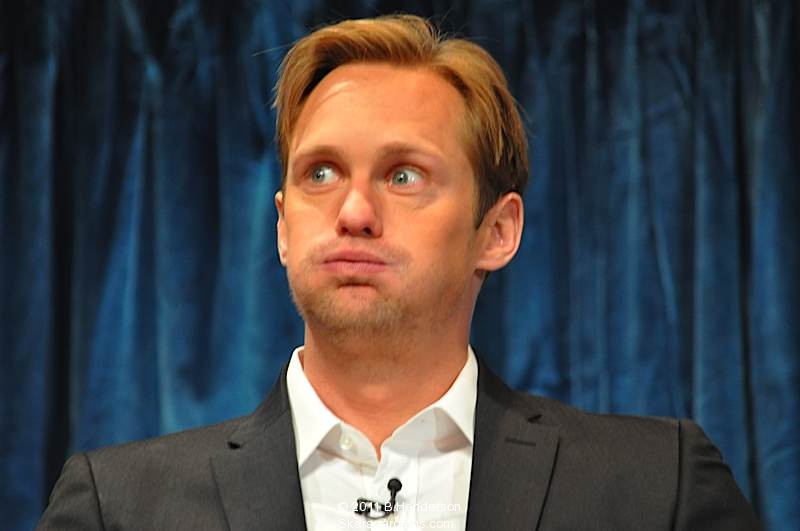 I loved how Alexander kept teasing fans on the amnesia story line that is prominent for the fourth book and whether or not it will be on the show for season 4. He kept saying: “Eric does not know who he is”. After getting his revenge for his family in season 3,“so, like a thousand years of resentment of humanity, is gone. He’s very innocent. So Eric needs help.”

When the moderator asked Alexander point blank whether or not it would be Sookie helping Eric Alexander did a bit of skirting around the issue. He was not going to be getting in trouble for revealing too much!  His reply was “there are a lot of friendly people in Bon Temps” ie “kind enough to help Eric”. That got a big reaction from the crowd and a bit of  “we’ll help you Eric”. 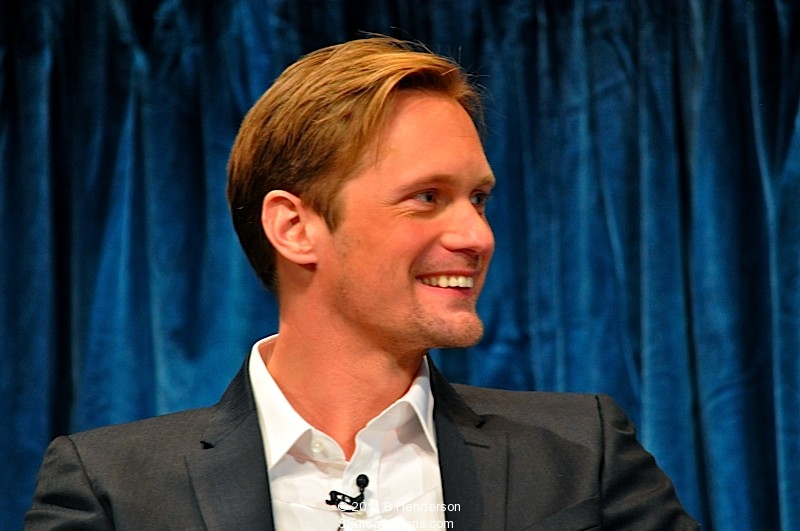 © 2011 B.Henderson Alexander listening to Kristin Bauer talk about the relationship between Pam and Eric (and how she was going to cry again)

Alexander then also said “Pam is obviously very helpful of my lovely daughter.” That of course just caused a huge AWWWWWW among the crowd! I know I was one of the loud ones starting that off! Kristin reacted of course to that awww with a “you’re going to make me cry AGAIN!”. Seems Kristin really appreciates the fan love of her character and yes the relationship her character has with her “maker” Eric Northman. Season 3 of True Blood really did a great job of showing that special relationship and bond. 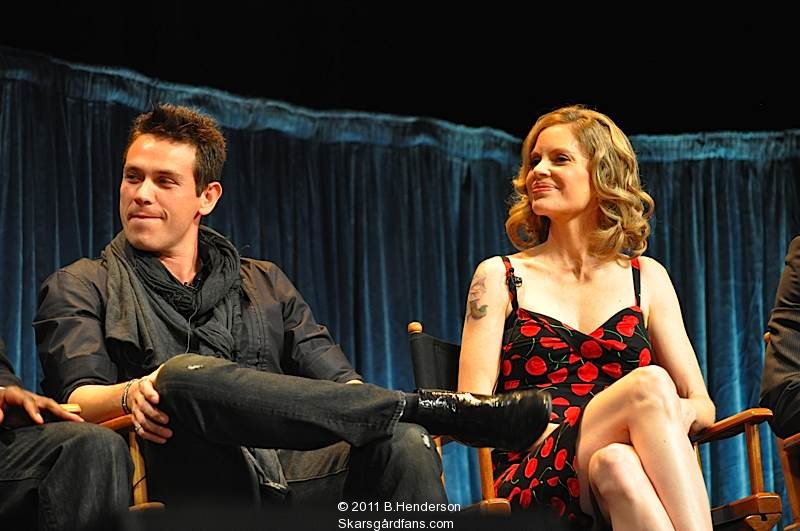 The cast enjoyed chatting about some of their most unusual fan encounters. Jim Parrack raised his hand quickly to talk about his experience while in Shreveport for filming his role in “Battle LA”. Apparently serveral fans had figured out that Jim and Alexander were staying at the same hotel and many could be found waiting for a chance to see them. He had an encounter where the a fan wanted Jim to sign her t-shirt (while she was wearing it). Jim was a bit apprehensive since her husband was standing right there. 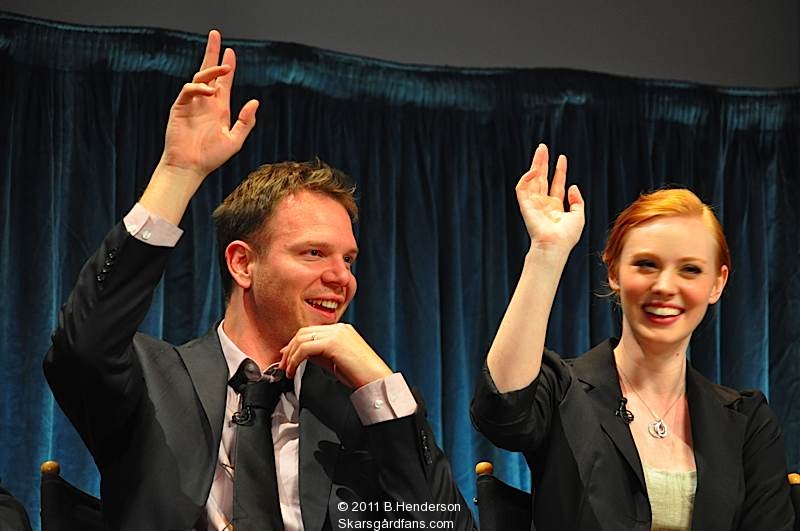 Chris Bauer I feel won the prize that night for the funniest encounter and had the entire panel and the crowd laughing. He and his wife were on vacation and he mentinoned to her how there may be some fans there who will recognize him. (his wife was more along the lines of sure they will Chris..) Sure enough he sees someone coming up to him and he says here it comes. The man came up to him and said “Sir, you have bird poop on your shoulder”. So much for fan recognition Chris said. That got the whole panel laughing and kept giggling for quite a while.

We were treated to a video showing the different sides to the show based on the characters -Humans, Supernaturals. There was also an unedited Season 4 clip that featured an angry mob outside of Fangtasia protesting against vampires. Hoyt , Jessica and Pam were featured in this clip and it was great to see Hoyt stand up to the human who called him a “fangbanger” and Jessica a not so nice name. Pam as always was spot on in her succint sarcasm. So yes fans Season 4 of True Blood holds a lot of drama for the vamps. (sounded like Reverend Newlin will be gaining new ground in his anti vampire stand). More to follow on the night. The images below were taken by myself. This is the batch of images  shows fans lining up before the panel started. The line for general admission went down the street for quite a long while. Fans started lining up around 7 am (even on the Premium side) The panel images are from the first hour. More photos will be posted. Still in process of editing (about half way done). When this site admin gets her camera going there is no stopping! (took over 1000 images).