It’s no secret that Eric Northman, played by Swedish actor Alexander Skarsgård, is our favorite bloodsucking nightwalker on HBO’s addictive series, True Blood. Besides his piercing blue eyes, Viking-esque bone structure, and abs that could cut glass, Eric has more game than Magic Mike. Lucky for us mortals who need help in the flirting department, Skarsgård and Calvin Klein have teamed up to give us a fragrance we can fully stand behind: ENCOUNTER Calvin Klein. The campaign for the new cologne stars Skarsgård in a series of ads that are just as sensual as the scent itself. With brilliant creative director Fabien Baron and leading lady/supermodel Lara Stone thrown into the mix, this may be the biggest men’s campaign for Calvin since Marky Mark dropped his drawers. We sat down with Skarsgård at the Greenwich Hotel in NYC to find out if his alter ego Eric would wear the seductive scent, what his Euro-pop guilty pleasure is, and all the shows he’s addicted to this season. Ladies, you’ll be surprised to find out the sexiest thing about the actor is his choice in television programming…Now, who’s ready for a one-on-one encounter with A-Skars?

You don’t strike us as a big grooming guy. Why did you decide to be part of the ENCOUNTER Calvin Klein Campaign?

“It was a combination of a couple of things. This is my first campaign. There has been a couple of opportunities before, where it just hasn’t felt right. With Calvin just being such a great house, I was honored. They’ve never worked with an actor before on a fragrance, so I was very flattered that they asked me. Creatively, it was a team I have worked with before, including Fabien Baron, who is, in my opinion, one of the greatest [art directors] of the past couple of decades — he’s done all the CK campaigns for 20-25 years. Obviously he’s got Interview magazine and I did something with them two years ago. Steven Klein shot that. I don’t know if you’ve seen it but it’s kind of dark, it’s out there. I’m on a bed with a leather glove and a baseball bat. It’s pretty wild, pretty crazy. We had a really fun weekend together shooting that. They’re so cool those guys, both creative and fun. I worked with Lara Stone; We did something with Peter Lindberg. He shot us for Vogue… she’s just so awesome. She is such a fun, laidback, and easygoing girl. It was so great to work with her, no ego at all…we had a really good time together. So, this felt like creatively, something fun for me to do. It was people I had worked with before and creatively had a blast with. When Fabien explained the concept to me, it felt interesting, dark, and cinematic. There’s a narrative, a story. Even though I’ve been hesitant to do things like this in the past, I felt this experience would be really cool.”

What do you like about the ENCOUNTER Calvin Klein fragrance?

“It’s very seductive and sensual, woodsy and dark. My taste leans more towards that, not the sporty citrusy tones. This has depth and darkness to it and I really like that about it.”

Do you think this scent will be a lady-killer for guys out there?

“It’s good. With any scent it’s about doing it in moderation. We all have an individual scent that’s like a fingerprint of who we are. I find that very sexy and very attractive. You want to enhance what you got. There’s an interesting marriage between your perfume and your own tone and scent. When you combine those, that’s when you get something very interesting and seductive and sensual. Don’t overkill! Don’t do too much. You don’t want to walk into a cloud of something that’s not you. I think it’s important to do it in a subtle way.”

Is Eric from True Blood someone who would wear it?

“If he wore a scent, this would probably be it. It has that depth: that darkness, those earthy tones. This would definitely be something for him. I don’t think he wears scents though — it’s more like a drop of fairy blood behind his ears. That’s more his thing.”

We’re huge fans of Swedish pop music, from ABBA to Roxette. Any guilty-pleasure favorites you love?

“I listen to a lot of Swedish music actually. There are so many phenomenal bands and artists coming out of Sweden now. I think the readers should check out this artist, Anna von Hausswolf. She’s on iTunes over here in the States. Really, really amazing. In terms of guilty pleasures, I’d go with Europe. You know? The metal band from the 80’s. That’s something I crank up. I grew up listening to that, so I love listening to those songs. It brings me back.”

What projects do you have in the pipeline?

“I just wrapped a film in Vancouver two days ago called Hidden. It’s about a family who are hiding in a bomb shelter (hence the name). It’s a post-apocalyptic film…pretty intense. The whole thing takes place in a bomb shelter with rats and soot and fire and smoke. Plus, I had to lose a lot of weight for it. I was on this diet for two months of water and kale salads basically. I was allowed a little bit of protein but no beer, no wine, no pasta. I like beer, wine, and rich foods. So, it was an intense experience but I had a really good time. It’s a great script. I just wrapped that.”

“I’m doing some press now for two films on the festival circuit: What Maisie Knew and Disconnect.”

What are you watching on TV these days? Are you into reality TV?

“No, not really. I watch Meet The Press and The Colbert Report. Those are probably the only two shows I watch. I’m a huge fan of Stephen Colbert, I think he’s a genius. And the news, I watch the news.” 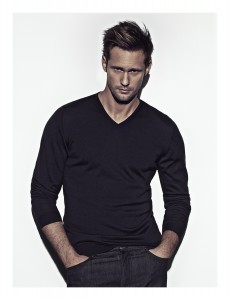