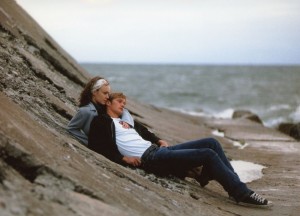 HAPPY END released in 1999,  is a story about Lukas, a self-absorbed young man adrift who meets Marja, an experienced, older woman. Lukas dreams of becoming a rock star. He escapes the city to his father’s holiday flat in Visby, a town on the Baltic island of Gotland. But the flat has been rented out to Marja, an eccentric 69-year-old writer determined to complete her memoirs. Nothing can hold her back, least of all a confused dreamer. Much against their will, a friendship slowly develops. But Marja harbors a secret, and when the truth emerges their friendship is put to the test. Their stay on Gotland takes an unexpected turn.