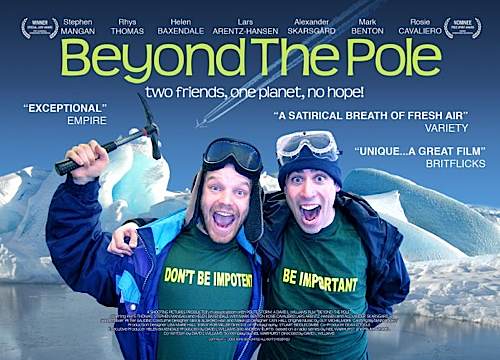 An arctic comedy/disaster movie Beyond the Pole is Withnail and I on ice, Touching the Void with Laughs.

Nobody said saving the planet would be easy…but does it have to be this hard?!

Beyond the Pole was screened in Los Angeles on Saturday May 1 at the United Film Festival.

Beyond the Pole, the comedy feature film from Actress/Producer Helen Baxendale (Friends, Cold Feet), today picked up Best Comedy at the London Independent Film Festival.  Directed and produced by Helen’s partner, David L Williams, and currently in UK cinemas, Beyond the Pole has now won 8 awards in European and American Festivals, at least one in every competitive festival entered.

“It’s so rare for British comedies to win over fans and critics but Beyond the Pole seems to be doing just that.  Critics have compared it to a cross between The Office and Touching the Void, which is very flattering, but in all honesty I don’t think there’s been a film like it.  It’s funny, moving, very dark in places and the performances from the actors are career bests.  I think the industry is gradually waking up to the fact that they’ve got a genuinely independent feature here that is funny and to be cherished and I really hope the actors get the credit they deserve when Bafta season comes round!”

Beyond the Pole stars Stephen Mangan (Green Wing, Confetti); Rhys Thomas (Bellamy’s People, Fast Show); Alexander Skarsgard (True Blood) and Helen Baxendale (Friends, Cold Feet) who also exec produces and is the story of two hapless do gooders who set out on the world’s first Carbon Neutral, Vegetarian, Organic expedition to the North Pole.  “Basically these guys shouldn’t be anywhere near the arctic.  They’ve never done anything like it before, their equipment is rubbish, they’re not even getting on and they’re in the most dangerous environment in the world.  When they meet the cocky Gay Norwegians it turns very dark indeed!” adds Helen.  “Go and see it. It’s funny.”

Beyond the Pole was shot on floating sea ice off the coast of Greenland.

What the Press are saying about Beyond the Pole

One thought on “Beyond The Pole”