“NANCY DREW” EXCLUSIVE SCREENING AND PANEL 2:00-3:15 PM –  Nancy Drew is a brilliant teenaged detective whose sense of self had come from solving mysteries in her hometown of Horseshoe Bay, Maine – until her mother’s untimely death derails Nancy’s college plans. Devastated by her mother’s passing, Nancy swears off crime-solving, but when a socialite is murdered, Nancy finds herself embroiled in a ghostly murder investigation. A supernatural presence begins to haunt Nancy’s investigation, and she discovers that the current crime has an astonishing connection to the unsolved murder of a local girl. Whether the ghost is here to help or hinder Nancy remains to be seen, but one thing’s for sure: Nancy’s going to have to unravel the clues from both the living and the dead to solve the crimes. Please join series stars Kennedy McMann, Leah Lewis, Maddison Jaizani, Alex Saxon and Tunji Kasim, along with executive producers Noga Landau, Melinda Hsu-Taylor and Stephanie Savage for an exclusive sneak peek of the first episode followed by a panel discussion. Moderated by Damian Holbrook of TV Guide magazine. NANCY DREW will air Wednesdays this fall on The CW. Ballroom 20

“ENTER THE STAR TREK UNIVERSE” PANEL 11:30 AM -1:00 PM – Over 50 years ago, the world was first introduced to what would quickly become a cultural phenomenon for the ages. “Star Trek” broke barriers then and continues to do so now, inspiring people of all generations and walks of life with its celebration of cultural diversity, scientific exploration and the pursuit of uncharted frontiers. Today, the “Star Trek” universe continues to thrive, exploring all new missions for Starfleet. CBS All Access invites you to join the cast and producers of its hit series STAR TREK: DISCOVERY and be the first to hear about two new upcoming additions to the “Star Trek” universe: the highly anticipated new series STAR TREK: PICARD, starring Sir Patrick Stewart, and the animated series STAR TREK: LOWER DECKS. Hall H

DETAILS ON ACTIVATIONS AND GIVEAWAYS:

“STAR TREK” UNIVERSE BOOTH: U.S.S. DISCOVERY TRANSPORTER EXPERIENCE AND “TREK” TALENT MEET-AND-GREETS – CBS All Access is bringing the “Star Trek” universe to the San Diego Comic-Con Exhibit Hall, Thursday, July 18 through Sunday, July 21, where fans are invited to step aboard the U.S.S. Discovery and travel to strange and distant lands through an immersive transporter experience. Fans will also have the opportunity to meet some of their favorite “Star Trek” talent in person with meet-and-greets in the booth (Booth #4237) on Saturday, July 20. Comic-Con badges are required for entry.

“STAR TREK” UNIVERSE EXCLUSIVE PINS – A number of exclusive, limited-quantity “Star Trek” pins will be available to fans during Comic-Con. All week long, a Starfleet Headquarters visitors badge will be available for those who visit and complete the “Star Trek” transporter experience on the show floor. On Saturday afternoon and Sunday, a limited quantity of pins featuring the debut of two characters from the upcoming CBS All Access animated show STAR TREK: LOWER DECKS will also be available from the “Star Trek” booth. At the “Jean-Luc Picard: The First Duty” museum experience at Michael J. Wolf Fine Arts, fans can get an exclusive replica pin of the Picard family crest as seen in STAR TREK: PICARD.

“JEAN-LUC PICARD: THE FIRST DUTY” EXHIBIT – In celebration of Patrick Stewart’s return to his iconic “Star Trek: The Next Generation” role, “Jean-Luc Picard: The First Duty” is a special exhibition showcasing original props, costumes and other artifacts tracing Picard’s life and Starfleet career. Items on display include his cherished Ressikan flute, the legendary Picard family album, his Starfleet uniforms, models of ships Picard captained, and all that remains of the “Borg Queen.” The gallery also features exclusive first looks at costumes and other items featured in the upcoming CBS All Access series STAR TREK: PICARD. Visitors will have the first chance to purchase exclusive STAR TREK: PICARD merchandise and opportunities for exclusive giveaways. The gallery is located at Michael J Wolf Fine Arts,363 Fifth Ave., San Diego, Calif. 92101 and will be open Thursday, Friday and Saturday of Comic-Con from 11:00 AM until 9:00 PM and on Sunday from 11:00 AM until 5:00 PM.

COMIC-CON COMEDY SHUTTLE – CBS will offer complimentary rides throughout the Gaslamp District in branded shuttles. Featured shows will include the new fall comedies BOB ⒕ ABISHOLA,CAROL’S SECOND ACT and THE UNICORN. Trailers of the series will be screened for the passengers as well.

Additionally, EVIL will be offering festival-goers complimentary rides during the day throughout the Gaslamp District, while hosting “Frightseeing Tours” in the evenings in Old Town. Trailers of EVIL, a CBS original series, will be screened for the passengers, and brand ambassadors will distribute giveaways. Exclusive “Frightseeing Tours” will run Thursday and Friday nights for select fans. 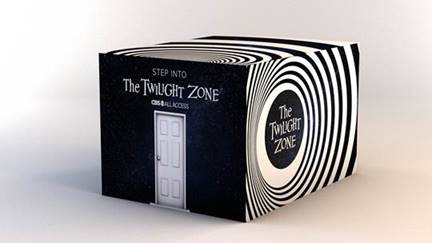 STEP INTO THE “TWILIGHT ZONE” EXPERIENCE – From Thursday, July 18 to Sunday, July 21. Located in the Interactive Zone at Petco Park, fans will be transported into CBS All Access’ THE TWILIGHT ZONE as they enjoy an immersive experience not only of sight and sound, but of mind. Reserve FREE tickets at: StepIntoTheTwilightZone.com. 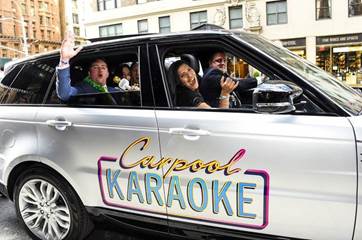 CARPOOL KARAOKE THE MIC – The Singing Machine launches CARPOOL KARAOKE THE MIC at San Diego Comic-Con from July 18 to July 21, 10:00 AM to 6:00 PM. Located in space “J” at the Interactive Zone at Petco Park, fans will be able to recreate the fun of James Corden’s wildly popular “Carpool Karaoke” segment and become the star of the car as they hop inside a branded Range Rover to sing along to their favorite songs. There will also be a daily CARPOOL KARAOKE THE MIC giveaway to a lucky fan that has posted their performance on social media.

CARPOOL KARAOKE THE MIC will be available for purchase with free direct-to-consumer shipping in the U.S., including a Carpool Karaoke Popsocket.