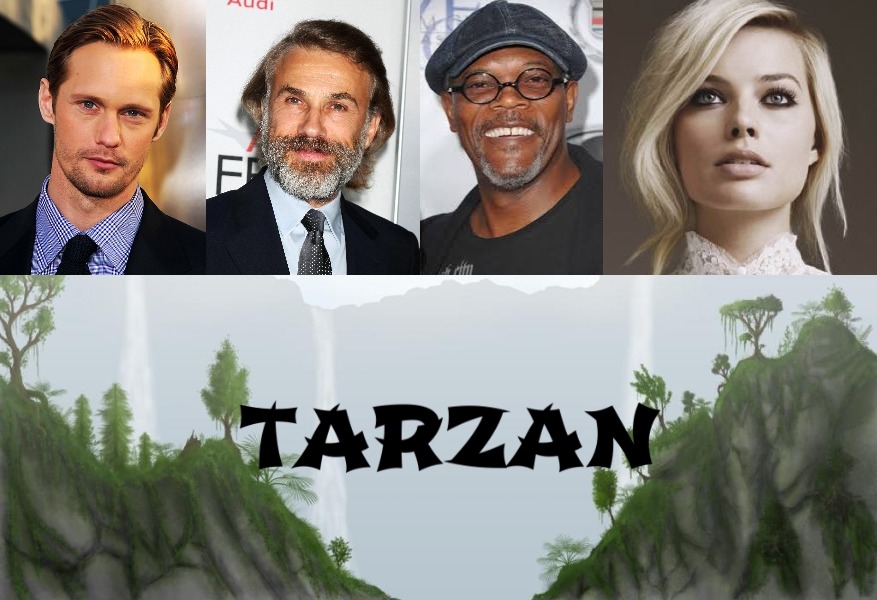 We’d pretty much given up on the chance of hearing anything of much interest from the “Tarzan” test -screenings that took place earlier in the year, but one of the lucky testers has finally come out on IMDb to share some details (subject of course to the gagging order they have to adhere it). Big thanks to @Tarzan2016July for finding this.

Below are direct quotes from the IMDb user:

It was quite humorous in parts and I definitely wasn’t expecting that. I mean, the villain’s plot is dastardly as can be, yet they still find a way to put humor into a film that touches on one of the most abominable regimes Africa has ever seen.

As you might expect, Jackson is excellent, Skarsgård (fearsome physique and all) is great, Honsou is appropriately intense and driven, Waltz is quality and Robbie is actually really decent.

The film doesn’t trample on existing lore but it does update it appropriately. As a black man, I’ve sometimes found “white savior” films to be difficult to watch. I’m happy to say that this is not that kind of movie. The Waziri (though I didn’t hear that word) have minds and martial capabilities of their own. Jane is actually a mentally and physically capable woman The film isn’t perfect by any means, the villainous plot is a bit strange in parts, the villains over complicate things in classical style, and watching a grown man go “ook ook” is disconcerting. But the action is suitably hyperkinetic, the Mangani are very well realized and the “victory cry of the bull ape” is…suitably fearsome. If you like adventure movies then I definitely think it’s worth a look. I’ve always found it hard to give films a numerical rating, but I would definitely pay to see it in the cinema if that means anything.

On the scenery / sets /cinematography:

The forest actually looked quite good. There was a certain weight to the trees and the light was properly diffused by the leaves, branches etc. It was huge and yet almost claustrophobic at the same time. From my point of view it had a certain brooding presence and an air of “there could be anyone/anything hidden in those shadows or behind that treeline”. There were different light palettes (I have no idea what the actual term is) for the different locations. Ranging from the somber blue-grey of the Greystokes’ stately pile, to the sun drenched Savannah to the shadowy with the occasional shaft of light tropical rainforest. Then the bits that took place in the past have a different look yet again, presumably so that you don’t confuse them with the film’s present day. Bear in mind that some of the visual effects hadn’t been completed, but those that were had a high quality feel to them. One thing I found interesting, assuming I wasn’t misreading it. In the flashbacks/memories, it was as though Tarzan was larger than life. Obviously, he’s a big guy anyway, but it’s as though the memory conveyed how they saw him, rather than the objective truth about him. I could be wrong, but that’s how it looked.

On the beginning and the action:

The beginning was good, the bark of the maxim gun was so ferocious I half expected it to tear the fog to bits and the sense of menace was very real. In terms of action, I saw it more as an adventure film interspersed with regular bits of action. Thankfully, unlike the old school adventure films, the action wasn’t just crude wrestling and hefty punches from a star who’s desperately sucking in his gut or wearing a man girdle. There was actual technique and agility in the fight choreography.

There’s one aspect of the film that I was predisposed to dislike and sure enough I found it tiresome. I understand why it’s important, and it is an important part of the Tarzan story but still. The whole “what is this wondrous creature” business with Jane always makes me cringe slightly. At least there’s some humour in it on this occasion.

On the ending (which may be changed):

The ending will probably be changed if I know anything about my fellow human beings. I found the end simple enough, others appeared confused. Human beings can change, but it’s a gradual process. Some of the test audience seemed to want to know that a character had changed utterly over the course of a few hours in the film universe. I take the view that such a thing would be very strange indeed. You can’t spell out what he’ll do next because only time will tell and I’m fine with that. Other people…weren’t. In addition, the end was obviously still being edited so I assume there’ll be some changes to the climactic action sequences. It didn’t quite flow in the same way as the rest of the film, but that’s to be expected.

On comparisons with other Tarzan movies:

The cartoon Tarzan was far superior in terms of children’s entertainment. I have no idea what rating this’ll have, but you wouldn’t want a 10 year old to watch it. It can’t be compared to the Lambert Tarzan because they’re totally different genres despite featuring the same main character. I liked Greystoke: The Legend of Tarzan, but it wasn’t an exciting film, if you see ehat I mean. The conservative Burroughs fans might not like it because there are changes. Africans haven’t made Tarzan their “chief” (which was always ludicrous anyway), the Mangani don’t have human style words and he doesn’t have back and forth conversations with Tantor or Numa or even use those words to describe them. Jane isn’t like Tarzan, but she can function perfectly well within the environment she grew up in. If there weren’t changes, a modern audience wouldn’t pay money to see it. But some will complain about political correctness because Jane is the way frontierswomen have always been and Tarzan is seen as a fearsome but intelligent friend and warrior rather than a near god.

On Alexander and Samuel Jackson’s accents/relationship in the movie:

It’s funny you ask that. I wonder how many people know what Skarsgård sounds like when he isn’t playing a role? Jackson doesn’t do an accent at all. He’s an American playing an American so he just sounds like himself. Skarsgård does an accent, but only in that he always does an accent. It isn’t easily definable which is probably for the best. After all, his character spent his formative years with non-human primates, then a period in a human village in Africa where the people appear trilingual and then finally, another undefined period in England. Lord only knows what such a person would sound like in real life. The relationship between Jackson and Skarsgård is important to the film’s plot, so I don’t want to say whether they were friends or enemies, foes or allies. They do play off each other quite well in my opinion if that helps.

On the lack of loincloth:

Alas, no loincloth as has already been stated. But he does go shirtless , I mean, how can he not, he’s Tarzan. And his trousers are very…well put it this way, I reckon he had to wax for this role