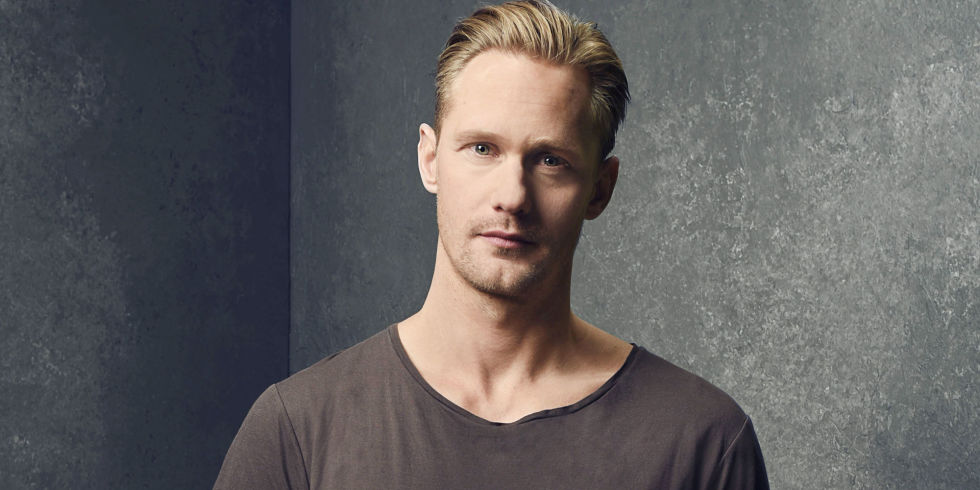 Since turning 1000, it’s been one critical success after the next for the 39-year-old actor, who is now dating model Alexa Chung. Most recently, he seduces his girlfriend’s 15-year-old daughter in the ’70s-set, Lolita-inspired The Diary of a Teenage Girl, whose August premiere was the talk of the town when Skarsgard showed up in drag. “It sounded like so much fun, and I got so excited,” Skarsgard says of his reaction when director Marielle Heller proposed turning the screening into a drag queen-hosted night. “Can I also come in drag?” he asked. “They were awesome and said yes. Then I was like, ‘Can I look like Farrah Fawcett?’ and they were like, ‘Probably not, but we’ll try.'”

Just before heading home to Stockholm to hang out with family, Skarsgard got into the specifics of his Farrah Fawcett-ish costume with us (spoiler alert: “There’s some weird kind of underwear situation where you just like pull it—I’m not going to get too graphic here, but let me just tell you: it’s torture”), working out like Tarzan, and how he ended up in Lady Gaga’s “Paparazzi” music video.

HB: How often do people say, “Earth to Meekus” to you?

​HB: That was your first role in the U.S., and it kind of just fell into your lap while you were on vacation. How’d that happen?

​AS: My dad, who’s an actor, was working in Hollywood, and I was visiting him. I’d just started acting in Sweden, and his agent basically said, like, “Do you want to try, do you want to go to an audition?” I was like, “Well, that’d be a fun story to tell the boys back home.” I’d never auditioned out there before, I didn’t have any reference points, I didn’t know what it was like, so I walk into a room, and there’s Ben Stiller. Two weeks later I’m in Manhattan driving down Broadway singing Wham! in a Jeep.

HB: Hell of a first audition.

​AS: It was really weird, because when I came back to Hollywood three years later or something, after doing theater in Sweden, I was expecting it to be super easy to get a job. You know, you just walk in in flip flops, meet Ben Stiller, read a couple of lines, and then you fly to New York. But then it hit me, like, “Oh shit, it’s quite competitive out here.”

HB: Did your father’s acting career play a role in any acting ambitions or hesitations?

​AS: More hesitations, I guess. As a teenager I didn’t want to be an actor at all. I desperately tried to find other things to do, but I kind of ran out of options, so, like… [Laughs]

​HB: You acted as a child and then took time off. What made you want to stop?

​HB: Another one-off that you became quite known for was your appearance in Lady Gaga’s “Paparazzi” music video. Did you just meet Lady Gaga in flip flops on vacation too?

​AS: My friend Jonas Akerlund is a director, and that’s basically it. At the time, True Blood wasn’t even out yet, or it definitely wasn’t a big thing. Lady Gaga had I think one song out before that, so I barely knew who she was. But Jonas is a dear friend of mine, and I was in LA. He was like, “So the plan is you try to kill her, and then she comes back and poisons you, and you die,” and I was like, “Oh! Sounds great!”

​HB: In your latest movie, Diary of a Teenage Girl, your character has sex with his age-appropriate lover’s 15-year-old daughter…and yet he’s a sympathetic character. How?

​AS: That was the challenge, and I was really intrigued by that: How do you make him, if not likable, then at least approachable or interesting? It’s to label him as the predatory bad guy and hate him for the duration of the movie, but dramatically that’s not going to be an interesting film. If you don’t feel anything, it’s just annoying to watch nineteen scenes of these characters together. You’re just like, “Get away from her; it’s disgusting.” So I didn’t know how to do it, and that’s a good starting point as an actor, I think, when you’re fascinated but don’t have the answers. One idea I had was to approach him as if he was a teenage boy, in a way, really holding on to his youth, so that even though he’s older than Minnie, there are moments where they’re just like two teenagers in love. It was important to find moments where the connection was real and beautiful, and from which he would have to pull himself out and go, “Stop—what am I doing?” That push and pull makes it interesting, hopefully.

​HB: You really rocked the ’70s mustache through and through. What do you think—long-term ambitions there?

​AS: I really enjoyed it and then I had to shave it off the day I wrapped because I was going on to another project. It was a shame—it might come back.

​HB: Did you yourself ever have a diary?

​AS: No diary, unfortunately. It would be fun to read. Wait, no it wouldn’t be fun—my god, I just realized.

​HB: What inspired you to attend the Diary premiere in drag?

​AS: We shot the movie in San Francisco and did some scenes with a lot of legendary local drag queens. We had Lady Bear as our casting director for the extras, we had Peaches Christ—they were part of the family making the film, and we all became friends. So [director] Mari [Heller] wanted these fantastic, fabulous drag queens to host a screening at the Castro in the Bay Area, do a number from Rocky Horror Picture Show beforehand, and throw a great after party. It sounded like so much fun, and I got so excited, and I felt like, well how can I be part of the fun? I don’t want to be excluded—can I also come in drag? They were awesome and said yes. Then I was like, “Can I look like Farrah Fawcett?” and they were like, “Probably not, but we’ll try.”

​HB: So that was supposed to be a Farrah Fawcett wig?

​AS: The wig and the dress and the nipples.

​HB: I didn’t see the nipples! You had nipples on?

​AS: Oh, yeah. Great Nipples. Sewn into the dress. It was pretty cool.

​AS: Well, I can’t express how much admiration I have for women in general, who walk around in high heels, but, drag queens, oh my god. You have to tuck away the junk—it’s incredibly painful. There’s some weird kind of underwear situation where you just like pull it—I’m not going to get too graphic here, but let me just tell you: it’s torture. And those shoes were killing me. But I loved it. I loved every second of it.

​HB: When you’re not in drag, do you get fashion advice from Alexa, or is your look all you?

​AS: I like to dress up and put on a nice suit for a party or a special event; I do enjoy it, but on a daily basis I wear stuff that I feel comfortable in, you know?

​AS: No nipples. I save those for the glamorous Castro premieres.

​HB: When you started True Blood, could you tell how big of a cult hit it was going to be?

​AS: Absolutely not. That was before the vampire hype. Twilight wasn’t out, and so I was like, “Okay, here we go, a Viking vampire—okay, what?!” I was excited because it was HBO, and I just did Generation Kill for HBO and loved working with them. I was excited about the people behind it, but at the same time, you never know. Everyone on the show was really blown away.

​AS: I do. I’ve been based in the states for twelve or thirteen years, but my family is still in Stockholm, so I try to go back there as often as I can. Pretty soon, we’re going to go out to the islands outside of Stockholm and hang out and cook food and drink wine.

​HB: In 2016, you play Tarzan alongside Margot Robbie’s Jane. What did it take to get into Tarzan shape?

​AS: You know, lifting weights and eating chicken.