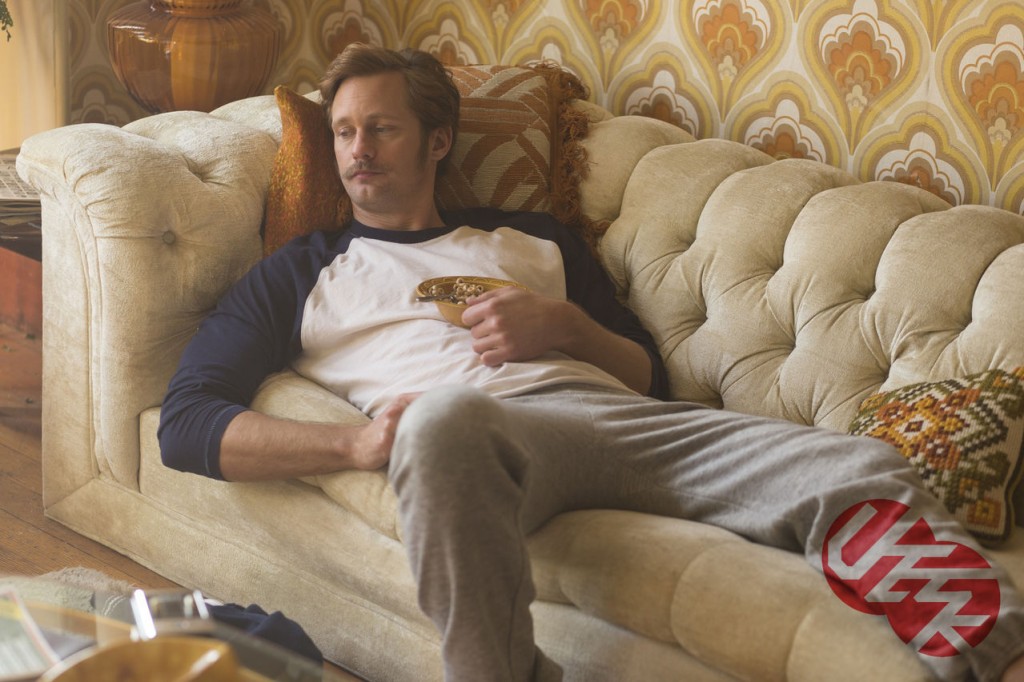 During the film festival, one prominent critic tweeted that the usual dictum about male movie stars being shorter and generally less impressive in the flesh did not apply at all to Skarsgård. Any initial intimidation regarding the handsome hulk, however, is immediately vanquished by his overwhelming friendliness and enthusiasm to wax lyrical about the joys of working with actor-turned-director Heller, which he does while reclined and sipping coffee in a private bar booth in one of the Scottish capital’s fancier hotels.

“It was one of the best on-set experiences of my life,” he says. “And I’m not exaggerating. I would say everything about it… the details of shooting a 70s movie in San Francisco, with those costumes, those sets – what a dream, you know? And it was also, obviously, a very small indie film, so it kind of felt like the movies I started out with in Sweden at the beginning of my career, where you lug stuff around together and it’s, like, a crew of 20. We all knew each other and everyone’s in it for the love of the project. And it’s a very eclectic, interesting group of people – our first assistant director was a legendary drag queen from San Francisco. Mari is from that area herself, so a lot of her friends were helping out on the movie, so every single person was there because they loved Mari.”

It’s clear Skarsgård was similarly smitten. “In terms of directing, she was incredibly inviting,” he says of Heller. “She wrote this script, she played this character off Broadway. This has been in her head for ten years, so she could have easily been quite possessive. But that was never the case. When we came on board, she wanted us to come up with ideas and make these characters our own. If something wasn’t quite working, Mari would be the first one to throw out the scene and go, ‘Alright, let’s start from scratch. Let’s see what works.’ If ever something didn’t feel true, there was never any ego there. She would be like, ‘OK, let’s change it. Whatever works.’ And it was so gratifying to see the excitement in Mari’s eyes if we tried something on the day that was completely new, a choice to see where that was going, and genuinely how thrilled she was when something was happening.”

As previously alluded to, trying to depict Skarsgård’s character as a fully rounded, non-despicable human was a particular challenge, considering the fact he sleeps with the teenage daughter of his partner. “It was very tricky!” he says. “We spent a lot of time thinking about it, talking about it, playing around with it. If that doesn’t work then the movie doesn’t work. You have to sustain it for an hour and 40 minutes, it has to be interesting. If it’s just a 35-year-old man preying on her and sleeping with her, I think emotionally and psychologically that would only be interesting for so long. And what really got me creatively excited was trying to figure out a way to play him, find moments where he was weak, where he was more confused than she was, where, in many ways, he was a teenage boy and not the responsible one.”

Also commendable about Heller’s film is its frankness regarding sex and nudity, with a degree of explicitness but, again, no exploitation. “The way we approached the sex scenes was about making it real and making it never gratuitous, never to shock people. There’s a point when she’s in her bedroom, looking at her own body… it was never supposed to be, like, sexy and hot or provocative. And I think that’s what’s so beautiful about it. It’s just a teenage girl looking at herself, you know. This is what it is. And the same thing with the sex scenes. It was never uncomfortable for Bel and I, because it always made sense. We knew exactly why we were doing it and why there was nudity when there was nudity.”

Expanding on this, Skarsgård is quite critical of some of Hollywood (and America)’s more questionable moral standards. “I think it’s ridiculous that people are so prudish and are more upset if they see a nipple than someone bash a head in. To me that’s so hypocritical, and isn’t that more damaging to kids? Even in a sex scene, you can’t show a butt or a nipple. To me, I don’t understand that. I think it’s really stupid. But when you do that in a movie, when you show that, it’s always important that you do it for the right reasons, ’cause I don’t think it’s interesting if you just do it to shock.”

Our chat’s conclusion sees some praise thrown the way of the film’s 1970s aesthetic: “Just to rock a moustache and the sideburns for a month… it was a real moustache so that was quite interesting on weekends. You know, going to restaurants and stuff looking like that.” The Skinny inquires as to whether his Tarzan will be a unique moustachioed interpretation, a question that gets a laugh and then a sad “no”. To the response of additional laughter but then tight lips, we also ask if he’s been offered a cameo as a ghost in the upcoming Zoolander 2. “I can’t say. That’s a good idea, though.Hamlet-style.”

Full article at The Skinny