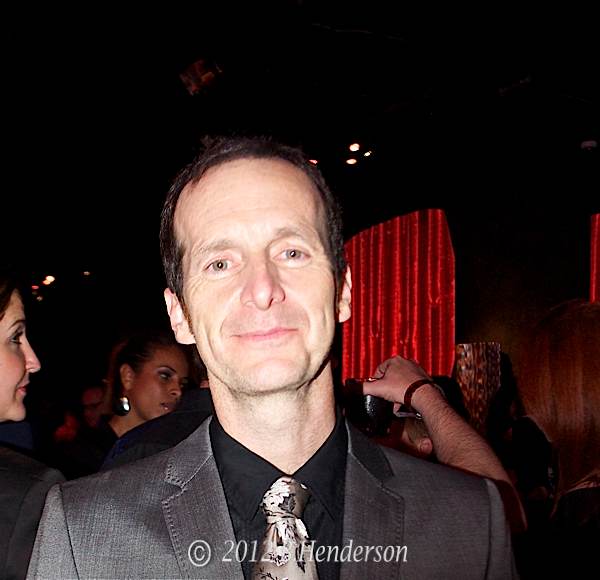 True Blood fans bid good bye to many characters in the season five finale on Sunday. Russell Edgington met the final death at the hands of Eric Northman. It was long coming but a bit sad none the less. Denis spoke with Vulture.com and the interview is below:

Those who’ve not yet seen the season finale of True Blood should turn back now, for there be spoilers ahead: Several of the show’s vampires have met their true death, and one vampire might have become something else altogether. For now, let’s focus on the demise of the 3,000-year-old vamp Russell Edgington, who may have provoked an all-out war by feeding on a bunch of frat boys (the massacre was caught on video), then met his own end when he drank from a fairy and opened himself up to a sneak attack by Eric. Denis O’Hare, who’s played the deliciously evil Russell, chatted with Vulture about bringing his story line to a close, making out with Steve Newlin, and why it’s probably best he’s gone.

When did you first find out Russell was going to die?
I didn’t find out definitively for a while, but there was some controversy about how to do it. We always knew in the end it would be Eric, but the question was how. Given that Russell’s so powerful, how could Eric surprise him? So the plausible answer is that he was drunk on fairy blood lust, and he isn’t watching his back, and Eric takes advantage before he can respond. There’s a nice moment when Russell begins to glow, like, Oh, maybe the fairy blood has made him immune, maybe it’s not going to happen. And then the glow withdraws — oh no! [Laughs.]

And at that moment, he only has one thing to say: “F#ck.”
That was Alan Ball’s rewrite, and when I saw that, I thought, Oh my God, that’s perfect. I mean, what else is Russell going to say? I love that his attitude is more like, Ah, well, not a sense of resistance or a last flash of anger, pity, or pathos. I think you get that sense in Interview With the Vampire that vampires get bored after they stay alive a long time, and it’s hard to keep forming new attachments. When Russell lost Talbot [in season three], he also lost some of the meaning in his life, and that’s why he grabs on to Steve Newlin. He needs a reason to enjoy life, because at this point, the pursuit of power isn’t enough. He might as well die; who is there left to meet — Mitt Romney?

Russell Edgington and Steve Newlin were such a cute couple, though. They would have made a great spinoff.
That would be nice, right? Once you got us in a room, we were gangbusters — and Mike McMillian is just brilliant. We would improv stuff on set all the time, some of it got cut, but some of it was great material. When we met Jason on the porch, we were having so much fun with that scene. I decided to do an old-fashioned hypnotism thing with my fingers, and Ryan [Kwanten] was cracking up. When we walk Jason to the patrol car, Steve and I tussled over who got to sit in front: “Shotgun!” And when we got to the field, Steve was stuck in the back seat going, “Baby, let me out!” Or when we had the scene where we killed the frat boys and we were dancing? We were more than dancing — we were making out. They decided not to keep the shot of us kissing, but we definitely went for it.

What do you think Bill’s become, after he’s risen from the blood? Is he Lilith made flesh? Is he now a vampire deity?
Even in season three, they were stepping away from the books, but now? We’re in uncharted territory. Bill was always the moral center, and to unmoor him like this? How will he find his way back to “humanity”? Would he have to die for Sookie? I don’t know.

Do you think Russell could return as a flashback or hallucination for his progeny the way Godric does for Eric? Or did Russell not have any others besides Talbot?
We have not met his other progeny. He could be a guy who never made any others. There was a lovely scene in season three where Russell and Eric had an intense moment, where Eric accepts his authority, and kneels before him, and you discover how Russell never had a son and he adopts Eric. That scene was cut, but there is an echo of that when Eric kneeled before him again this season. And for Eric to take Russell’s life, it was appropriate, and Russell knew that and he welcomed it. This was the only person he’s ever accepted as a son.

Sounds like a lot of moments were cut. Ever figure out who Russell’s maker was?
You know, I had my own back story for Russell. Alan Ball and those guys let me run with it, and at one point they asked me for this info: “Can you send it to us?” We never officially talked about this on the show, but Russell’s real name was Korun, which is ancient Celtic and means “Raven.” And I know who his maker is, but whoever it was, he killed him. Again, this is all back story I made up, and HBO hasn’t approved it, but I’ve been playing with it for years. My theory was Russell was a slave for most of his life, and after he was made a vampire, he killed all the slave masters and in that same hateful rage, he killed his maker.

What did he think gorging on fairy blood would do to him? And why not save a binge for closer to daylight?
There’s no fairy blood handbook. No one has any schematics on how much fairy blood you should take to be in the sun, how long you can survive in the sun on it. Is it good for a year? A day? And Russell is more instinctual versus strategic. I’m not sure he has a plan, so he’s not thinking, I should wait until 7:30.

What are you going to miss the most?
During season three, we had such a great core group — the actors who played Lorena [Mariana Klaveno], Talbot [Theo Alexander], Franklin Mott [James Frain], plus Alex [Skarsgard], Stephen [Moyer], and Anna [Paquin]. We hung out so much on set, because we had a lot of scenes together. I was pretty close to Kristen Bauer, too. I love her. We were such a good group. And there was definitely talk around the set during season five about not killing Russell. One of the cast members was lobbying to keep Russell around, and he went and talked to Alan and the head writers, but they sadly shook their heads, and they said, “For credibility’s sake, he has to go. We can’t let him survive again.”

Who was lobbying on your behalf?
I can’t say. I will say that it’s a very major character. But I totally agree with Alan Ball and the writers. There was no way for Russell to survive. And you would get tired of him if he did.

You’re nominated for an Emmy for American Horror Story. Any chance you’ll pop up on the show’s next season?
I don’t know. There’s always a possibility. If we storm the Emmys, we’ll probably put Jessica [Lange] in front of us and hide behind her, like one big bowling pin, because she’s invulnerable.

She’s sort of the Russell of that show.
She is! I remember thinking that. Even though my character Larry was well received, he wasn’t as wildly popular, because he was pathetic. People like strong characters, who seem definite and have a lot of confidence. Being neurotic is almost never sexy.