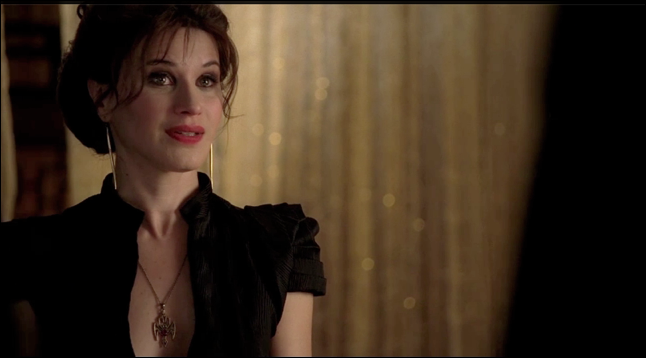 Next week’s episode of True Blood is titled “Somebody  That I Used to Know”. Episode 5.08 will air on July 29, 2012 and fans had a taste of the episode tonight. The video below is the promo for episode 5.08:

“Somebody That I Used to Know”: The Authority revels in a new direction; Sookie and Jason (Ryan Kwanten) visit the site of their parents’ deaths; Luna (Janina Gavankar) gets stuck on Sam (Sam Trammell). (Written by Mark Hudis; directed by Stephen Moyer.) Playdates: July 29 and 31

Episode 7: In The Beginning

“Bill and Eric get a powerful taste of sacred blood. A revelation at Hot Wings causes Sookie to wonder what her life would be like without faerie powers. Meanwhile, Sam sniffs out several shifter shooters; Hoyt finds camaraderie in a new group of friends; Alcide prepares for the worst in his faceoff with J.D.; Andy attempts to reconnect with Bud; Lafayette finds an unlikely ally searching for Jesus’ body in Mexico; Lettie Mae (Adina Porter) pays Tara a visit; Arlene takes a sentimental journey as her concerns for Terry deepen.”

Short description: “Salome reveals her true allegiances; Sookie embraces her human side; Sam sniffs out some perps; Alcide braces for a fight.”

Episode 8: Somebody that I used to Know

“At Authority headquarters, the Chancellors revel in the afterglow of recent events; Eric gets a message from Godric; Bill is shaken by a distant memory. Helped by Claude and his sisters, Sookie and Jason visit the site of their parents’ deaths, with shocking results. An emotional Luna tries to walk in Sam’s shoes. Hoyt’s new pals bring him a present; Lafayette leads a séance to purge a curse; J.D. ups the stakes of his fight with Alcide.”

Short description: “The Authority revels in a new direction; Sookie and Jason visit the site of their parents’ deaths; Luna gets stuck on Sam.”

Episode 9: Everybody Wants to Rule the World

Episode 11: Song of the Dead Faerie

“Eric tries to save Bill from losing his humanity.”

Gallery below has the screen caps: (still working on them)