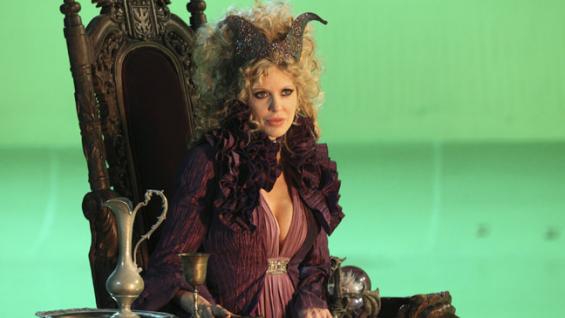 True Blood’s Kristin Bauer van Straten will be on tonight’s episode of ABC’s “Once Upon A Time”. Jethro from The Hollywood Reporter recently interviewed Kristin and she gave a little tidbit on True Blood’s season 5. For the full interview please click here: THR

[box] Bauer van Straten is only currently booked for the one episode, but she might return in the future to take care of some unfinished business, which she says will become clear after Sunday’s episode. She’ll have to balance that return with shooting on Season 5 of True Blood starting sometime in November and the actress tells us that she just received the first script this past week. “It’s pretty exciting,” she says.

She tells THR that the first episode picks up right after Season 4’s finale where the witches are finally defeated and Pam’s maker Eric’s (Alexander Skarsgard) love for Sookie (Anna Paquin) has remained strong after the amnesia curse.

“Definitely going to be more forced interaction between Pam and Sookie, I feel,” she says. “That’s the impression I get. You know there are so many story lines that you only get a little tidbit each script.

But, I feel like Pam and Sookie are going to have to deal with each other.” True Blood returns to HBO next summer. Once Upon a Time airs Sundays at 8 p.m. on ABC.[/box]