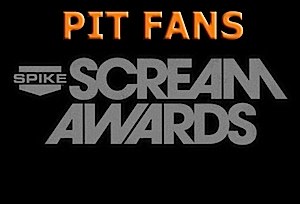 SHOW DESCRIPTION
The reboot of one hallowed franchise and the thrilling final chapter of another are poised to lead the way at Spike TV’s SCREAM Awards 2011 (#ScreamAwards), which will be taped on Saturday, October 15 at the Universal Lot in Los Angeles, CA. “X-Men: First Class” and “Harry Potter and the Deathly Hallows – Part 2” each garnered 14 nominations and will vie for many of the night’s top honors during Spike TV’s sixth annual celebration of the sci-fi, fantasy, horror and comic book genres and the actors, creators, icons and pioneers who have influenced and shaped the industry over the past year.

Directed by Matthew Vaughn, “X-Men: First Class” nabbed 14 nominations, among them “The Ultimate Scream,” “Best Director,” and “Best Fantasy Movie.” Not to be outdone, the final installment in the saga of the Hogwarts Academy’s prized pupil, “Harry Potter and the Deathly Hallows – Part 2,” also was nominated 14 times, and is up for “The Ultimate Scream,” “Best Director” and “Best Scream-Play.” Two other Marvel Comics franchises joined “X-Men: First Class” to round out the top four, with “Captain America: The First Avenger” and “Thor” receiving 11 and nine nominations, respectively. Among television franchises, HBO’s “Game of Thrones” and “True Blood” each tallied seven nominations, with AMC’s “The Walking Dead” up for six “SCREAM” awards.

WARDROBE REQUIREMENTS
Please read carefully!  We need real genre fans to attend the SCREAM Awards and the way you are dressed is critical to the success of the show.  We are requiring that all ticket requests are accompanied by some recent photos.  And, we are requiring all confirmed ticket holders to come in a costume (see below).  See photos in the marquee for inspiration and guidance.  Please read the detailed list of do’s and don’ts below:

CATEGORIES & NOMINEES
Following are several of the categories and nominees for Spike TV’s “SCREAM Awards 2011”.  For the full list fans can go to scream.spike.com:

Good luck and yes don’t forget to keep on voting for True Blood and the cast nominated! Again Alexander Skarsgard and Stephen Moyer are both nomnated for Best Horror Actor. Post here has link here to vote: I was able to be at the Scream Awards taping last year and it was a blast! Even though we dealt with tipsy fans who were quite rude (Not Truebies!) and the rain soaked us it was worth every second to see Alex and the True Blood cast on the stage accepting their Scream Awards!