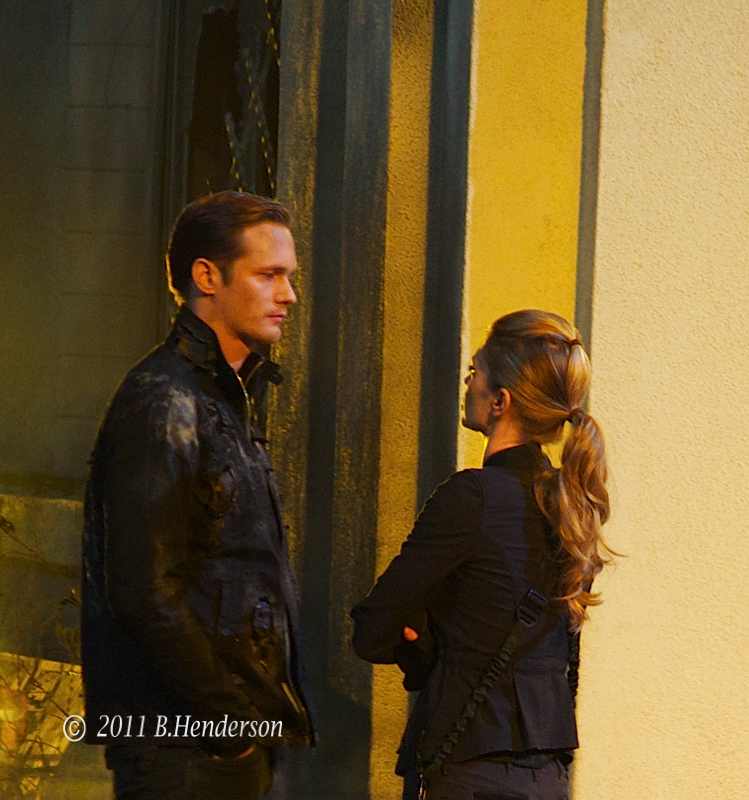 Last week I heard that True Blood was going to be filming on location for episode 4.11. I could not resist the temptation to see some of my favorite vampires on Main Street. Just a guess that they would be filming vampire scenes but a night time shoot usually means vampires. SPOILER WARNING> yes the images may spoil the action for fans so don’t peek if you don’t want spoiling. (I’ve not included the big spoiler photos since I truly don’t want to ruin it for fans )

Filming on location means a lot of set up required and HBO brings out a crew with a base-camp where they are able to set up the trailers that house the costumes, gear, electrical equipment and all the behind the scenes items to create the on screen magic. On the walk back to my car the first night I spotted the catering trailers that had all the food items for the cast. (yes they play vampires but when it is cold outside the humans need coffee!)

The scenes are planned out so in the beginning fans were able to see the cast rehearsing the lines, set up as to where they stand etc in order to have the proper shot. Stand ins normally do just that-they stand in for the cast. Alex’s stand in was nice and smiled a lot at the growing crowd. He was also really great with the fans and would chat with them when it was possible. Since it is a “live set” there were times when silence was required (ie no photos, no video , no talking or it would interfere with the shot)

Alex's stand in is on the left above. (Alexander S. can be seen a little further to the right

Another stand in is shown below:

Deborah Woll on the left. Stand-in is on the far right (not her stand in..)

The first night of filming that I watched primarily involved the building that is the “Moon and Goddess Emporium” for season 4. In real life this location is a year round Halloween store. The signs outside are changed for the name and cranes were in place for one of the cast to be “flying”. We saw the who I believe to be Annie Fitzgerald who plays a new character “Kirsch” in a harness and the crane is used to have her “fly”. She also seemed to stop in mid air (perhaps a certain witch casts a spell to stop her mid air? ) 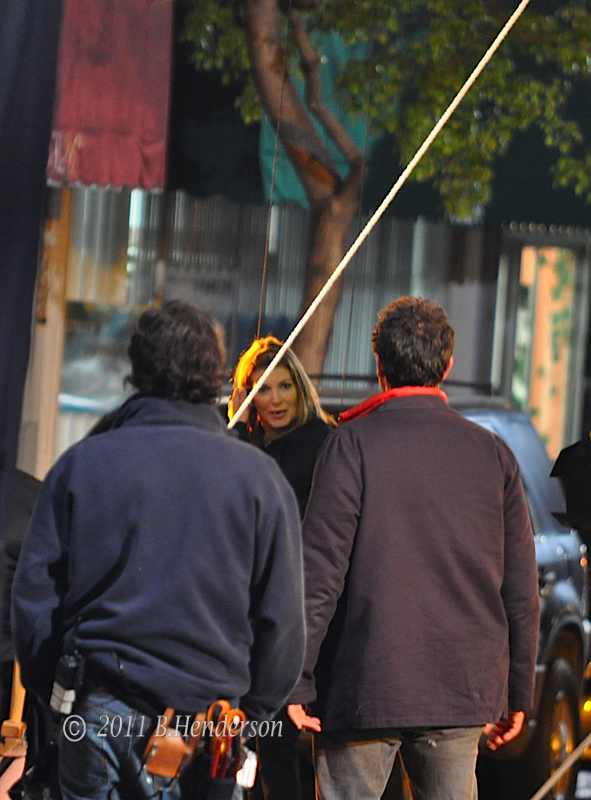 Annie Fitgerald preparing for the "harness" and the upcoming scene

Mid air shot. The harness would have a rebound action that I was able to catch in this shot:

The action on the first night I watched involved Alexander Skarsgard (Eric Northman), Kristin Bauer van Straten (Pam), Stephen Moyer (Bill Compton), Deborah Woll (Jessica Hamby) and Annie Fitzgerald (Kirsch). There were others on site but don’t want to be too spoilery.

I’m guessing that another vampire met the true death prior to this action since I did see some vamp-goo-mains on the ground below:

I will write up a bit more of the action that is spoiler in nature closer to when this episode is due to air. Truly do not wish to spoil it for the fans and also for the cast and crew who worked really hard to film the action for us.

Some of my observations-nothing major or new but Pam and Eric really seem to have an amazing child and maker relationship on the show and it was fun to seem Kristin and Alexander smiling and having fun in real life.

Filming went on till 5 am the night before and also till almost 6 am that night. Many fans were able to get their photos with some of the cast by being patient and respectful and waiting till the time was ok for the cast to be able to walk over and snap a photo. I only stayed till around 1 am the first night since I had to get my son to school the next morning.

The second night I watched filming the set seemed to be action that continues from the prior night. Fire crews were on site and a huge truck with flammable liquid was on set as well. There was a lot of smoke and special effects that make sense considering the episode title for 4.11 is “Soul of Fire”.

The cast member on the ground above (shown with a crew person) was quite a character. During the down time, the cast person would throw some of the debris on the ground at some of the others. They kept missing their target. However if the target turned around to see where the noise would come from, the jokester would lay flat on the ground with a “what? wasn’t me” look. Even with working long hours, lack of sleep and the cold  the cast of True Blood still had a lot of fun. They do seem to get along very well with each other.

It was fun to see Deborah Woll do her scenes and have to wait for the makeup person “fang” her up. On screen we see the final magic but in real life it does take a bit of doing.

On location filming does involve a lot of set up, rehearsal , waiting around and re-takes. A huge thank you from me to the cast  and to HBO crew for allowing fans to be present to watch the real life action before we see the final “magic on screen”. As long as fans continue to be respectful of their policies on no filming or shooting during the live filming we should have a chance again in the future to watch filming. I know there have been a lot of leaked videos and photos. Not all fans present were filming during the shooting part. Most of the ones I have seen were the “good guys”. I won’t post links to the ones that are definitely the big no-no ones.

Mikethefanguy did a great write up of his experience during the filming and he was very respectful. Here is the link and he has a lot of great photos with the cast. (he also stayed till the wee hours of the morning). Two of my friends also went back on Friday night and got super lucky and amazing photos with Alexander Skargard! I’m so happy for them and all the fans that were able to snap their photo with Alex. He is really a nice guy and truly does appreciate all his fans.

Waiting sucks but at least the season 4 premiere is ALMOST HERE! Here is a gallery of images I took during the rehearsals: