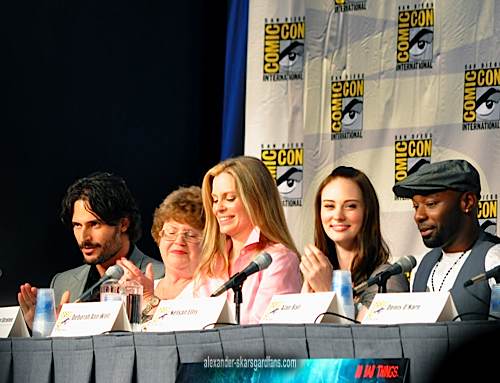 Deborah Ann Woll has suggested that the relationship between Jessica and Bill will improve in the fourth season.

Speaking to E! Online, Woll hinted that Bill (Stephen Moyer) will start to become more of a mentor to Jessica.

“I think we’re definitely in a healing stage where he’s finally accepting that he has a progeny, that he has a daughter vampire, and he needs to give me tools to actually survive,” she said. “So he’s definitely more co-operative and participatory in my growing up.”

However, Woll suggested that Jessica’s relationship with Hoyt (Jim Parrack) will not be so good.

“[Jessica and Hoyt] ended in a very positive place but obviously that won’t last for long,” she said. “We definitely pick up with a bit more trouble happening. Bon Temps is a scary place! The first two episodes are very interesting – Jim and I had some really fun stuff to play with right off the bat. But maybe the first episode is my favorite as of now, just because it is the most varied.”