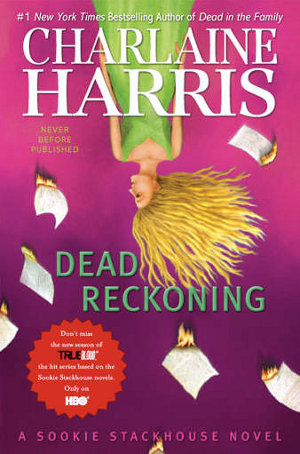 Charlaine Harris’ Facebook fan page posted that the first chapter for “Dead Reckoning” will be posted on her website on Monday (if not sooner). An early Christmas present for fans of the Sookie Stackhouse series. The book series is well known now due to the HBO tv series “True Blood’. For book fans, the books will always be special. Even when the show is veering way off course (the show is loosely based on the book series and created by Alan Ball) fans can still find solace in the book relationships.

The unofficial book synopsis is as follows:

The book synopsis/spoiler is below:

With her knack for being in trouble’s way, Sookie witnesses the firebombing of Merlotte’s, the bar where she works. Since Sam Merlotte is now known to be two-natured, suspicion falls immediately on the anti-shifters in the area. But Sookie suspects otherwise and she and Sam work together to uncover the culprit – and the twisted motive for the attack. But her attention is divided. Though she can’t ‘read’ vampires, Sookie knows her lover Eric Northman and his ‘child’ Pam well – and she realises that they are plotting to kill the vampire who is now their master. Gradually, she is drawn into the plot -which is much more complicated than she knows. Caught up in the politics of the vampire world, Sookie will learn that she is as much of a pawn as any ordinary human – and that there is a new Queen on the board . . .

UPDATE:  Ms. Harris’ site is found here at charlaineharris.com. The first chapter of the last book is up at the top and the address for that chapter is formatted as: http://charlaineharris.com/DITFChpt1.pdf MY “Guess” for the new book is that the url might be this: http://charlaineharris.com/DRChpt1.pdf it may be wrong since it is just a guess. I am just using basic logic in how web addresses are created based on file names. Don’t rely on my guess of course but keep on checking on here and on her website. Just hope all the fans don’t over burden her servers today! Yes WAITING SUCKS!!! The image below shows the top menu section of Ms. Harris’ website. The current chapter one is shown as Chpt 1 Dead in the Family

The book will be released May  3, 2011 but is available for pre-order on Amazon.com. If you still have not pre-ordered the book please consider using the link below. I donate the referral fees given by Amazon (which is 4%) to charity.