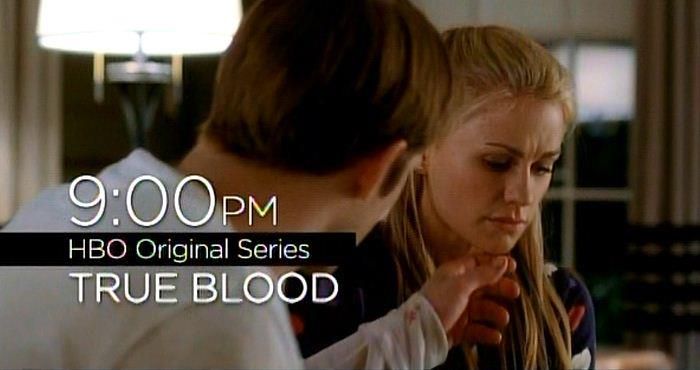 Waiting always sucks for True Blood fans. At least the new episode 4.10 #46 will be shown tonight. The Nest posted some images on their Facebook wall that show some images from one of the promos shown above SOURCE:

This gives me more hope that there are “lingering” effects to the amnesia spell. It looks like the spell has been broken in the image above. I wrote my speculations for this episode and had the feeling that yes there will be some small effect on Eric post spell break. UPDATE: I believe that Sookie is also sad in the image above  worrying about her special Fae powers that probably caused a lot of damage on a spelled vampire at the Tolerance Meeting. Maybe she is afraid that she might hurt one of the vamps she cares for   by accident (waiting sucks) The review here states “Sookie will use powers she has not used before” So I definitely think she is going to show a lot of power and yes will break a spell (and in the process I think will kill one of the spelled vamps)

UPDATE: I will be adding more images to the gallery on this page every hour (hopefully) before tonight’s episode airs tonight! I also have some for next week’s episode as well (I think they are for some of 4.11). Yes teasing and waiting sucks! the other photos from the rehearsals are in the posts here:

This image from the filming led me to believe that as well as what Alex in character was saying in a later scene in the rehearsal. 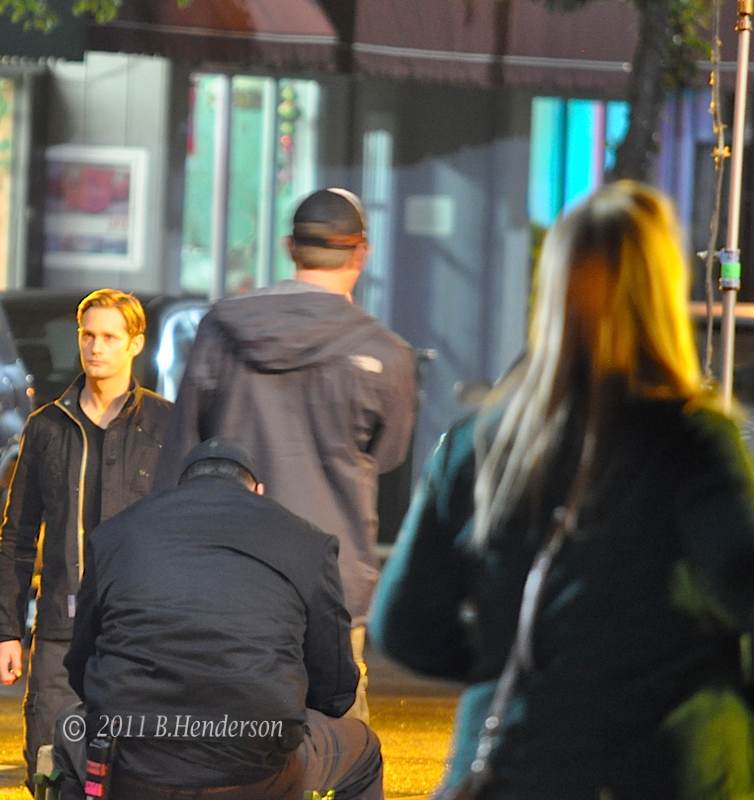 Eric is definitely post amnesia. I still think he is offering himself up for Sookie.

I will post the uncropped image later today before the episode. I don’t want to set off a huge fan war (which would be a bigger one that the witch versus vampire war)

Waiting still sucks but here are a few more photos to whet the appetite: 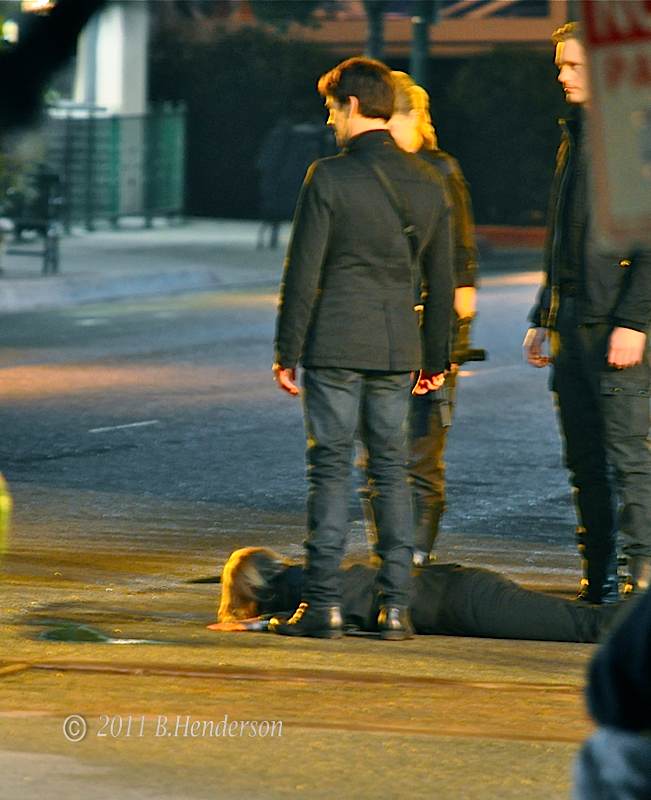 Vampire "Kirsch" on the ground with King Bill

Another image showing Pam in a bit of “protection” mode with Eric (love their relationship on the show):

Pam is in "protect" mode here I believe.

Gallery below has new images from the rehearsals: 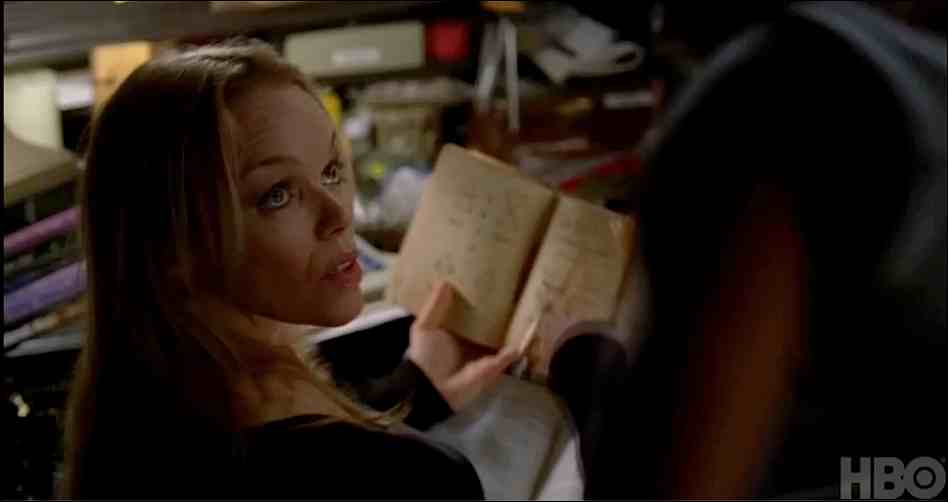 The next episode of True Blood will be another crazy one according to the episode summary:

Episode #46 – 4.10: ‘Burning Down the House’ As all hell breaks loose in Shreveport, Sookie summons her most potent powers yet to save Bill, in the process breaking a spell and leading Marnie/Antonia to re-evaluate her mission. Jason urges Jessica to glamour him for Hoyt’s sake; Terry drags Andy to “Fort Bellefleur” for an intervention; Alcide reconsiders his allegiances after Marcus fight with Tommy; Jesus, accompanied by Sookie, Lafayette and Jason, tries to breach the Moongoddess Emporium’s defenses to liberate Tara and Holly, while Bill leads a brigade of vampires committed to blowing the place to kingdom come.

Here are my speculations and yes possible spoilers. So read at your own caution. Spoiler alert – (as if that makes you not want to read them). The song we may hear I believe is the one by The Talking Heads link here:

I don’t believe that the Tolerance Meeting will be one that the AVL will want humans to remember at all. When we last saw Nan and King Bill, MarniA had taken control over the 3 vampire sheriffs, Blackburn, Kirsch and Duprez. They had just “gutted” three AVL guards and were in the process of shredding some more humans at the meeting. (bodies could be seen flying around). CLICK ON THE READ MORE  for full article END_OF_DOCUMENT_TOKEN_TO_BE_REPLACED 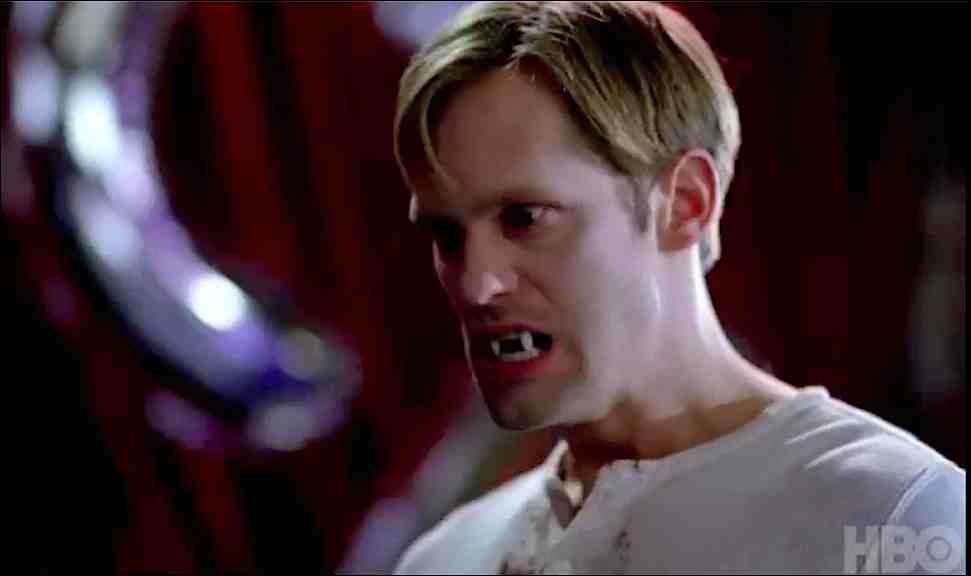 Almost time for new True Blood! The title for episode 46, 4.10 is “Burning Down the House”. Here is what I think will be the ending song for the episode. (the title for this episode was tentatively titled: “The World’s a Mess, It’s in  my Kiss” at first. I believe we will hear this song during the big battle in the ballroom scene)

I still have the cd for this album: 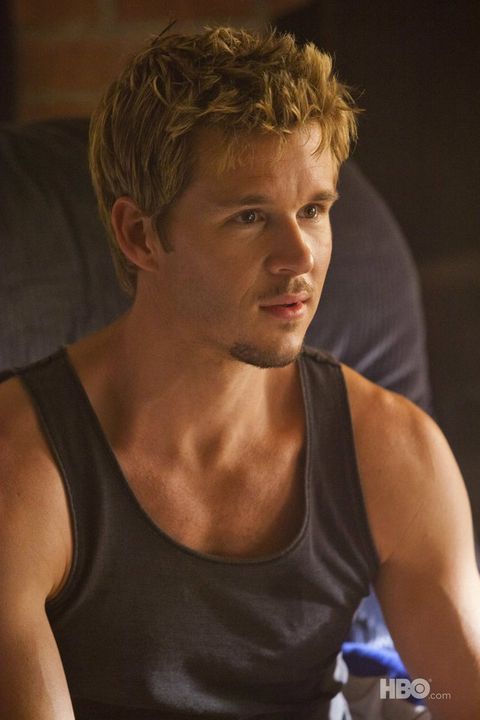 HBO posted the new True Blood clips for this next episode: CLICK ON READ MORE END_OF_DOCUMENT_TOKEN_TO_BE_REPLACED

HBO just posted some new True Blood Season 4 promo images on their Facebook wall. Looks like they are for episode 46- 4.10 Burning Down the House. 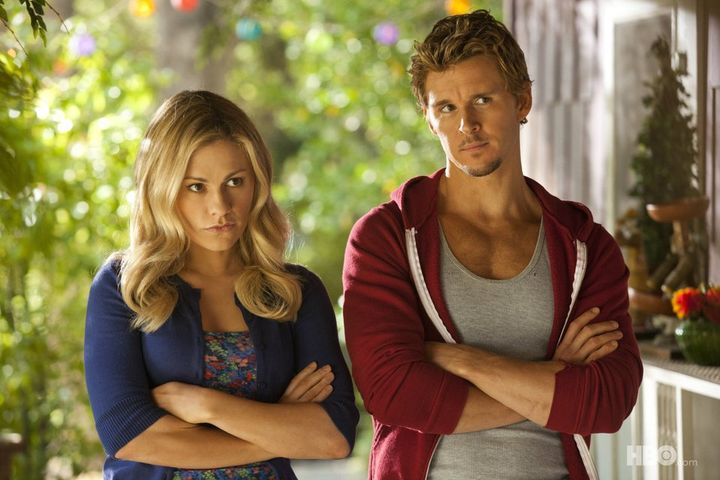 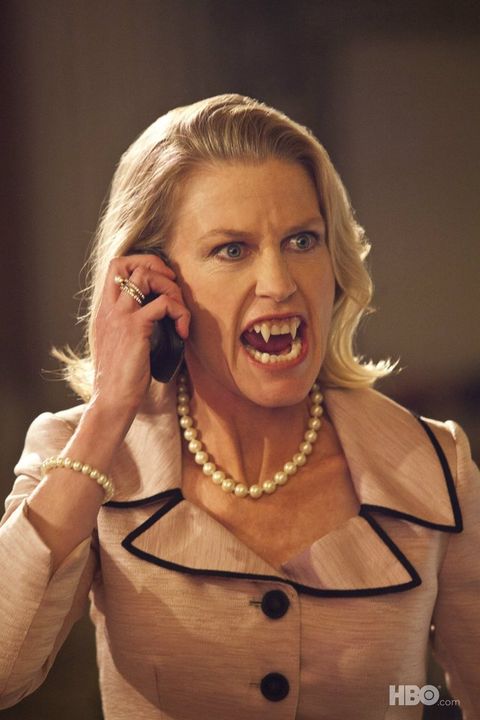 Click on the read more for the full gallery of images to date: END_OF_DOCUMENT_TOKEN_TO_BE_REPLACED 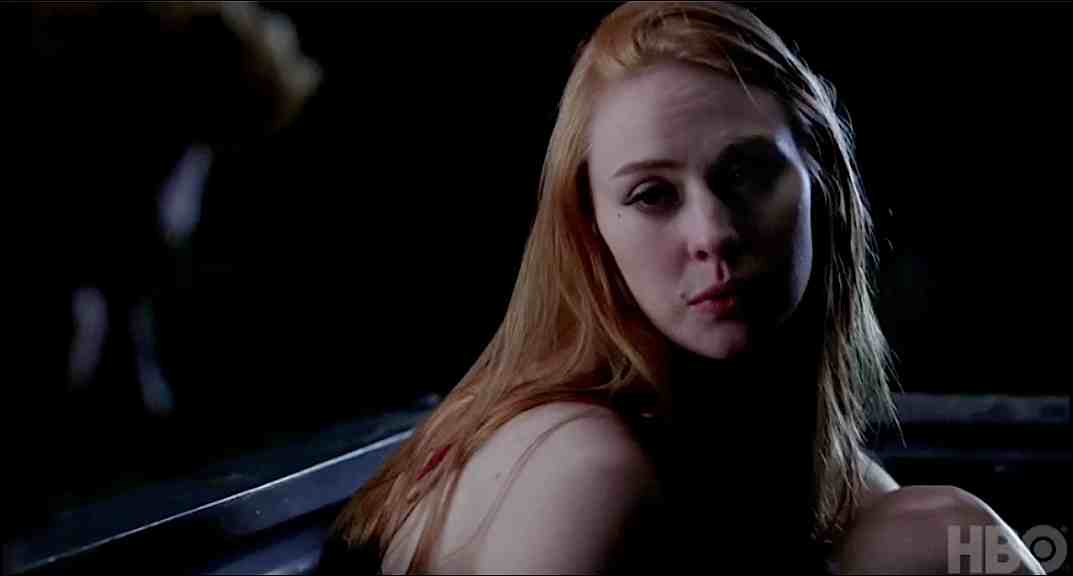 The next episode of True Blood 4.10 titled “Burning Down the House” will definitely keep fans worrying about what will happen to the vampires and humans on the show. When we last saw Sookie and the Bon Temps vampire King Bill all heck had broken loose. MarniA had taken control of the vampire sheriffs and they were in the process of ripping apart the AVL guards.

Eric Northman was shown in one of the balconies jumping down and running towards his target-King Bill. In the video trailer for the episode we see Eric running towards the King: 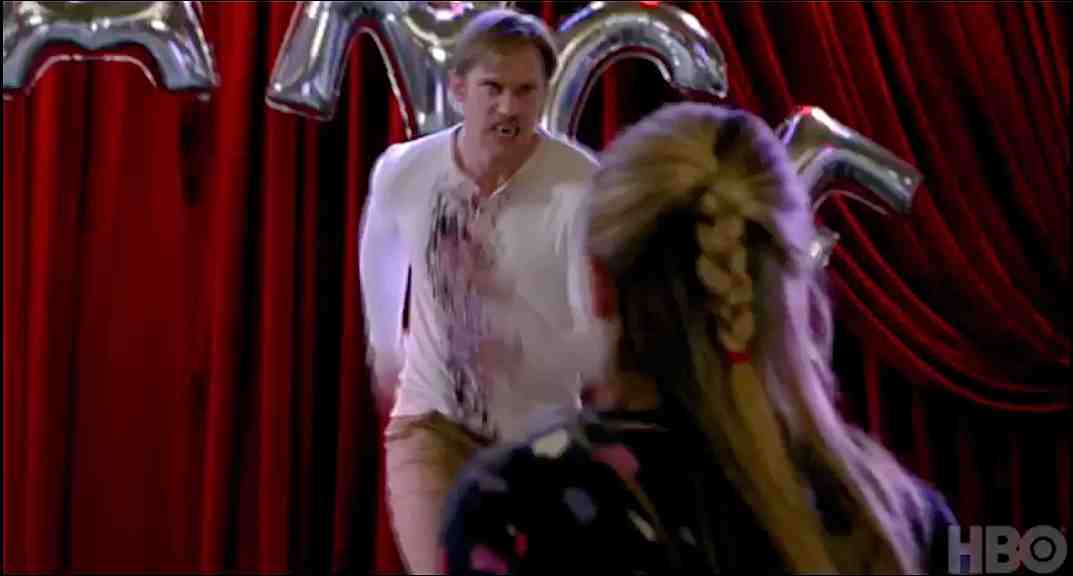 This looks like the action fans were shown in the 7/1/11 Entertainment Weekly magazine. scans found here: Now it makes a little more sense as to why Eric was shown trying to pull the King’s head off. (the balloons behind them are the same ones above)

Under MarniA’s spell Eric is under her command to kill the King. Yes it also does appear that episode 46 will have a lot of action. However knowing Alan Ball I do believe this action will be painfully shown at a slow pace! Yes the action will seem quick but there are a few other stories that will be featured in this episode.

The episode description is below:

Episode #46 – 4.10: ‘Burning Down the House’ As all hell breaks loose in Shreveport, Sookie summons her most potent powers yet to save Bill, in the process breaking a spell and leading Marnie/Antonia to re-evaluate her mission. Jason urges Jessica to glamour him for Hoyt’s sake; Terry drags Andy to “Fort Bellefleur” for an intervention; Alcide reconsiders his allegiances after Marcus fight with Tommy; Jesus, accompanied by Sookie, Lafayette and Jason, tries to breach the Moongoddess Emporium’s defenses to liberate Tara and Holly, while Bill leads a brigade of vampires committed to blowing the place to kingdom come.

I was able to attend the filming for some of this episode since it was close by. At the time I was not sure if it was for episode  4.10 or 4.11. Turns out it might have been for both! The images from the filming that I took are found on this page: SPOILER again in nature! post for this was added to site 6/14/11: 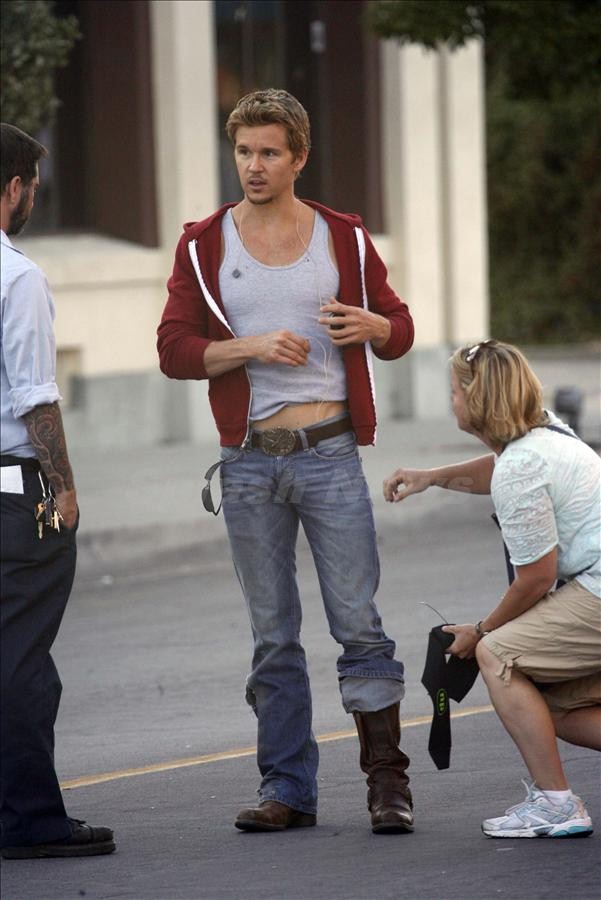 There are also some other images that were taken from filming
that are found here: posted 5/26/11.  They show Jason, Lafayette and Sookie. SOURCE: Splash 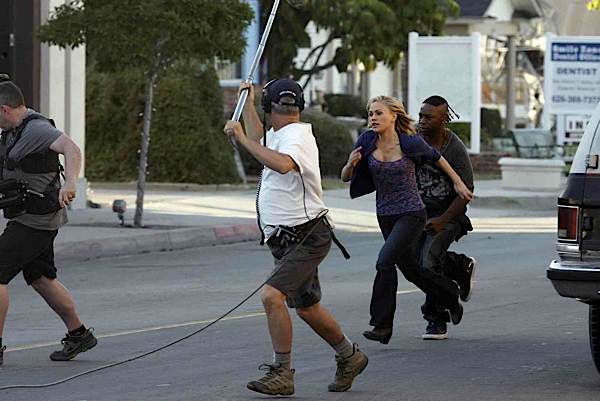 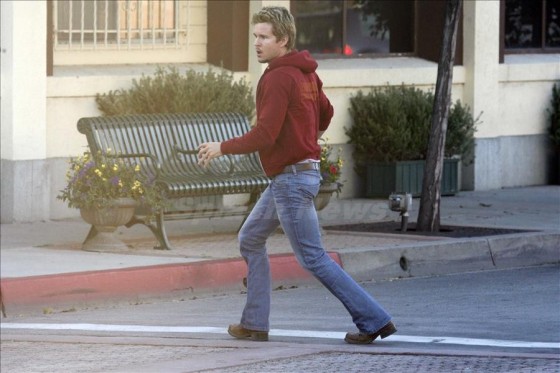 Ryan Kwanten above is definitely running near the “Moon Goddess Emporium” during the daytime. (he is across the street from the Moon Goddess location) The image below shows the filming at night:

I also have a few images that I have not yet published  (they are really spoiler in nature). As it gets closer to air date I will write up a bit more “speculation” and post the images that I can. Waiting really sucks! At least now the rehearsals I was able to watch are making a lot more sense! Waiting Still SUCKS!

New True Blood preview trailer aired after tonight’s episode. Episdoe 4.10 looks like it will be another crazy action filled one! click on the READ MORE for the trailer and caps: END_OF_DOCUMENT_TOKEN_TO_BE_REPLACED