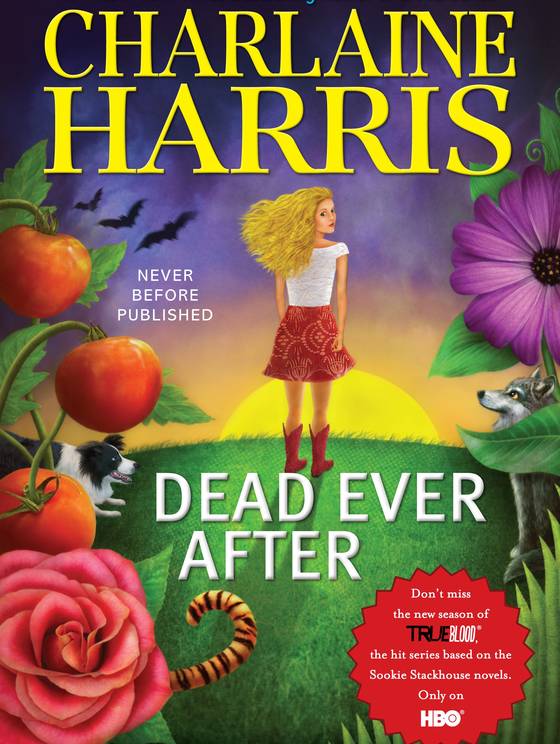 USA Today posted the new cover art for the final Sookie Stackhouse book! We see quite a few characters in the artwork (tiger tail, bats, Dean the dog) and yes Sookie Stackhouse! From their article: SOURCE:

Dead Ever After, the 13th and final novel in Charlaine Harris’ Sookie Stackhouse series, will be published May 7, and USA TODAY has this first look at the cover, which shows Sookie walking off into the sunset.

Inspiration for the HBO hit True Blood, starring Anna Paquin, the novels tell the story of a telepathic waitress who mixes it up with all sorts of paranormal creatures.

Asked why she’s shutting down the series, Harris says, “I felt that I’d told the story I set out to tell. I thought continuing it, which I could have done, would have been a disservice to readers who have stuck with me this long.”

The First Sookie novel, Dead Until Dark, was published in 2001. There are more than 20 million copies of the series in print.

It will be sad to see the last book! (but I can’t wait to get my hands on it!) So what do you think will be in this last book? My theory-she will be saying good bye to some of the prior suitors in this book- Quinn (the tiger tail), Sam- (shows as Dean the dog), Alcide (the wolf). They are behind her in the art work. She is walking towards the sunset and is closest to the bats. The bats are a symbol for the vampires in her life (even though they don’t turn into bats). There are 3 there representing 3 important ones in her life, Eric, Pam and Bill. Her hair is pointing towards the bats and they are closest to her. The bat closest to Sookie is bigger than the other 2 so that one could be Eric and his wings are pointing downward as if going to land next to Sookie. In Dead and Gone, Sookie’s hair pointed towards Eric on that cover. (she was between Eric and Bill and did choose Eric in that book) Yes of course I still see it as Eric and Sookie being together in the end!!

UPDATE:  there are other symbols on the cover-

Rose is a symbol of love and beauty.

The flower to the right of Sookie looks like an aster to me. There is a purple one called Celeste. The symbolism per teleflora for Asters: