As the bloodsucking Viking vampire Eric Northman and his loyal protege Pam De Beaufort, Alexander Skarsgard and Kristin Bauer have us wrapped around their fingers…or should we say fangs? The delightfully badass duo have had quite the season battling Marni’s wicked witch spells, love triangles and the anti-vampire league. Now, the actors who have brought Fangtasia’s vicious vamps to life are giving fans a chance to own a permanent piece of the True Blood saga. Click on Read More: END_OF_DOCUMENT_TOKEN_TO_BE_REPLACED 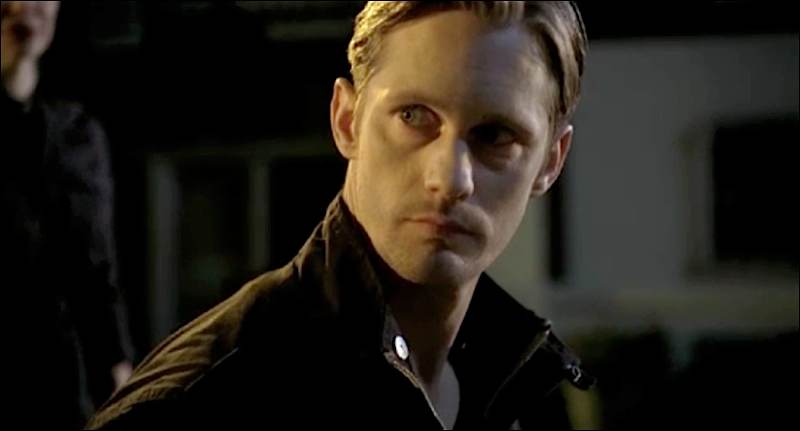 HBO finally posted the promo that aired before Sunday’s episode. They titled it “Death is Coming”. This shows scenes from the season 4 finale:

Here are the screencaps SPOILERS! Lot of spoilers in the images! 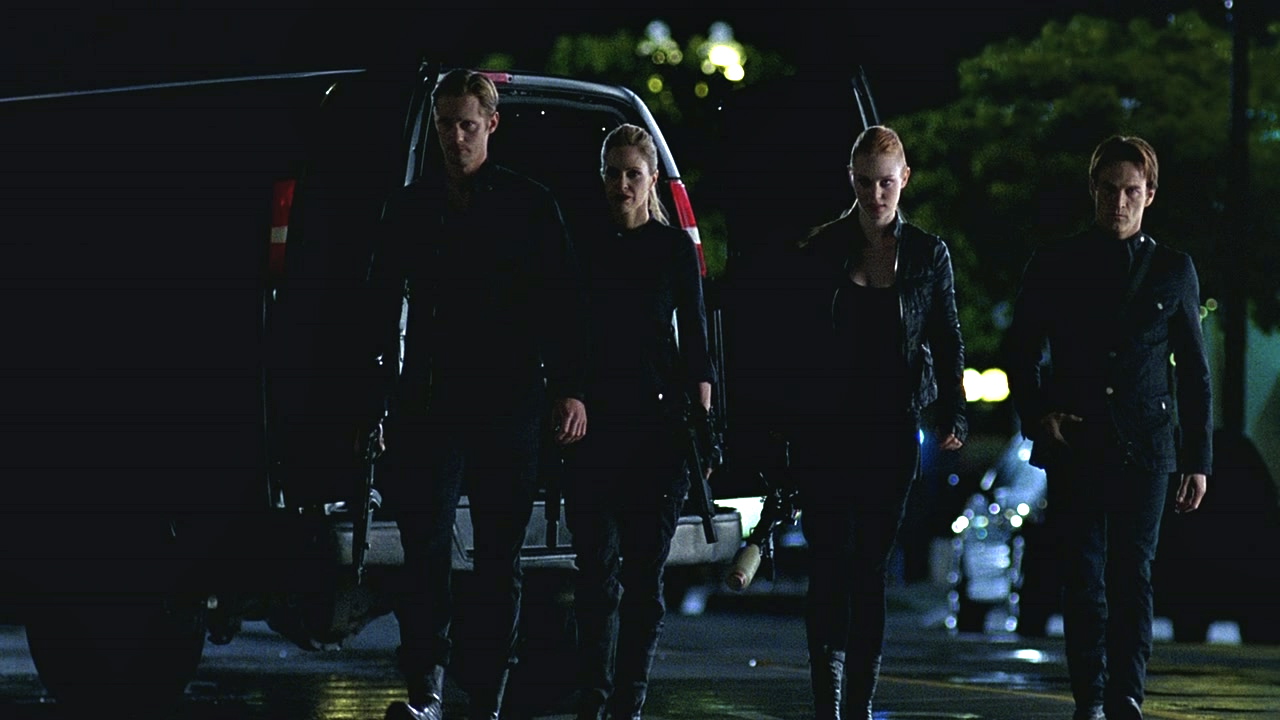 Duprez unfortunately I believe will meet his final death. (there were vampire goo-mains on the ground shown below). Duprez was shown in the promo trailer for 4.11 trying to battle with Bill. CLICK ON READ MORE For rest of article: END_OF_DOCUMENT_TOKEN_TO_BE_REPLACED 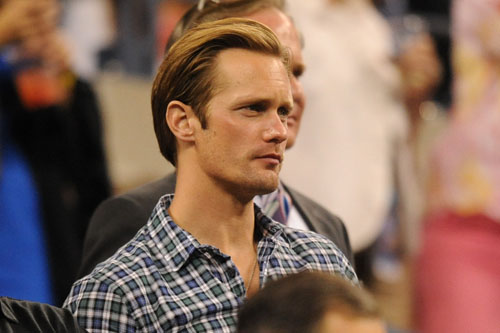 Alexander Skarsgard was at Day 2 of the US Open. Looks like he was enjoying the match between Rafael Nadal (ESP)[seeded 2] and Andrey Golubev (KAZ). 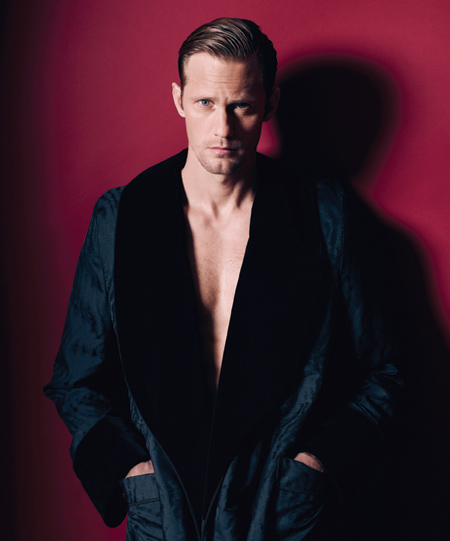 Blackbook Magazine featured Alexander Skarsgard on their cover. Here is an excerpt from the interview with True Blood’s very own Eric Northman. The interviewer, Nick Haramis  had the great chance of visiting with Alex during a reshoot of a scene for the fourth season (sounds like one of the ones in the finale perhaps)

“Use your phone and shine a light over here,” says Alexander Skarsgård, whose indefinitely appropriated Southern twang echoes off the walls inside one of the many vast stages at Hollywood Center Studios in Los Angeles. It’s True Blood’s final day of production before the show’s annual hiatus (they’ll reconvene in November for season five), and the near-empty lot we’ve been wandering feels like a schoolhouse abandoned by its students for the summer. Most of the cast and crew have driven out to Malibu this afternoon to film the pyre-heavy final scene of the HBO series’ fourth season, but Skarsgård and his costar Stephen Moyer have been directed here to re-shoot a close-up. “Follow me,” he says as we edge closer to the darkest part of the hangar-size room.

“I wish I could find a f#cking light switch,” he adds, before eventually flipping one. The chamber we’re in—done up like a dank basement with black columns and intimations of evil—suddenly becomes awash in the glow of overhead lights. “This is where I tortured Lafayette,” he says with a satisfied grin, referring to the show’s second season, in which his character Eric Northman, the sheriff of Area 5, chained Nelsan Ellis’ drug-abusing, cross-dressing fry cook to a post. He waves me through another door into what looks like a nightclub filled with barstools, dusty liquor bottles, and a poster of a vampiric George W. Bush. “Welcome,” he says with exaggerated gravitas, “to Fangtasia!”

this part on True Blood:

After he gets dressed, we move to a similarly barren room, where Moyer, who plays his nemesis Bill Compton, is wearing a costume almost identical to Skarsgård’s, his hair being parted by a doting stylist. Skarsgård sits down next to him and, almost immediately, a makeup artist begins applying dots of red corn syrup to his cheeks, chin, neck, and chest. “Don’t you want to know why Eric’s face is all bloody?” Moyer says in a surprisingly thick British accent given the seeming authenticity of his Southern drawl on the show. Skarsgård nods at Moyer to continue. “He rips somebody’s heart out and then drinks blood from the aorta like it’s a straw. It’s so fucking cool!” Skarsgård, who’s been known to deliver some of the show’s wittiest one-liners, says, “When I’m finished, I just look into the camera and burp. It’s so gross.” Perched next to one another like the Bobbsey Twins as imagined by Quentin Tarantino, True Blood’s two greatest adversaries catch each other’s gaze and erupt with laughter.

The Moon Goddess Emporium is relatively new to True Blood, as are those who frequent it, the witches who were introduced to the show this past June. Tibetan prayer flags hang from the room’s vaulted ceilings. It’s a cluttered space made all the more crowded by the 20-odd crew members anxious to film the scene and start their hiatus. Before the cameras begin rolling, Skarsgård walks up to his mark in the center of the room, Moyer kneels in front of him—his character is picking something up off the ground when the shot begins—and the director watches them from his chair in front of a camera monitor. While waiting in their places, Skarsgård looks down at his costar and says dryly, “It looks like he’s sucking me off,” to which Moyer responds by bobbing his head vigorously. Skarsgård closes his eyes and starts moaning with the intensity of a slash-fiction hero, after which Moyer stands up and wipes imaginary fluids from his mouth with the back of his hand. He scans the crowd and after taking a slight bow says, “And the Emmy goes to… ” A crew member whispers to no one in particular, “Now that’s what I call ‘Action.’” 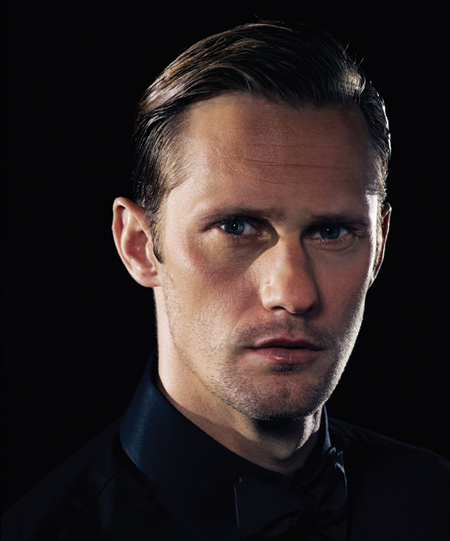 Later that night, the fourth season of True Blood officially wrapped, Skarsgård returns home to shower before meeting me at the Hollywood Roosevelt for a burger and a few ice-cold bottles of IPA. Over two hours, he draws more than a few glances from a group of Australian tourists and even from social gadfly Rumer Willis, the daughter of Bruce Willis and Demi Moore. “It’s you, Eric, isn’t it?” says one particularly guileless man, as if testing the waters before introducing Skarsgård to his wife. “Would you please take a picture with her?” He graciously obliges, wrapping his arm around the woman’s waist and smiling for the camera. “Would you… bite her?” This he does not oblige. When the couple retreats back to a far corner of the restaurant, Skarsgård says, “That’s one thing I’ll never really understand. But the main reason I don’t ever do it is because if I do it just once, every single person will be like, ‘Bite me! Bite me! Bite me!’”

Whereas he doesn’t at all begrudge a forward fan, he’s less patient with paparazzi who follow him to the gym and out to dinner. “They don’t care about you,” he says of the tabloid lensmen. “They just want their money. I’ll never get used to the fact that they camp out to get a picture of me eating a sandwich. It’s strange to me, and I want it to be strange—I don’t ever want to feel like that’s normal.” Which is why he’s excited to relocate for a few months to New York this fall, where he’ll film What Maisie Knew, a relationship drama costarring Julianne Moore and Steve Coogan. “LA is such a one-trick pony—80% of the people here talk exclusively about managers and agents—but New Yorkers don’t really care as much about ‘the industry.’”

For the full interview please visit: Blackbook Magazine I will scan when I get my hands on the dang thing! The cover of the magazine featuring Alex is here:

The fangover for True Blood fans after last night’s episode is epic (at least for me). HBO just posted the Inside the Episode video for 4.10. Interesting to hear Alan Ball describe Sookie’s realizations and how it impacted Eric Northman. 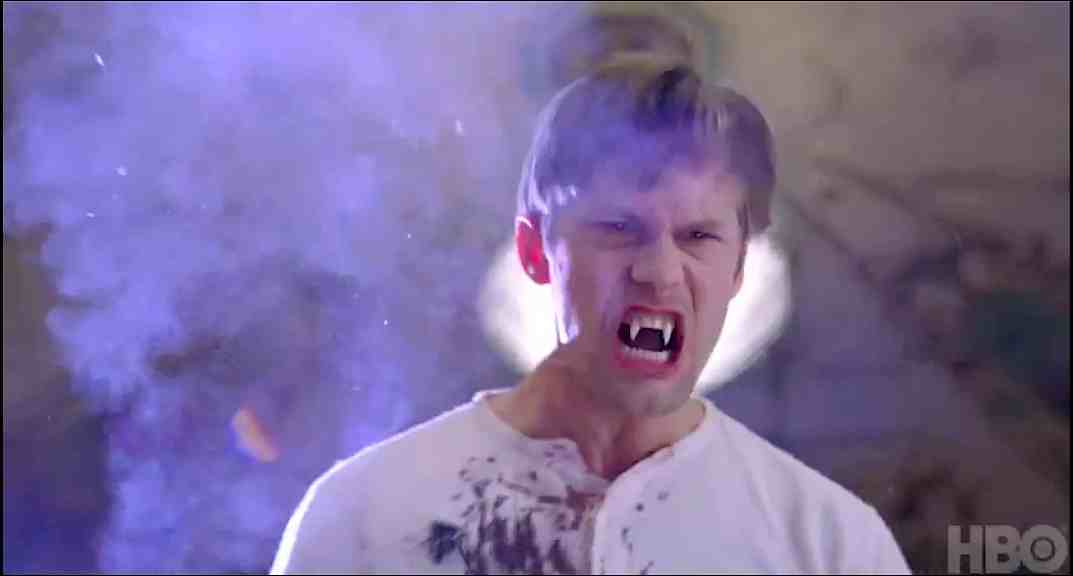 Another new episode of True Blood finally aired! The gallery below contains the screencaps from the episode. Yes fans only 2 more episodes left. I will be sad to see the end of this season for sure! It has been fun seeing Eric Northman this season with and without his memory! Waiting really sucks!

The page on this site will also have the images: CLICK ON READ MORE FOR The gallery: END_OF_DOCUMENT_TOKEN_TO_BE_REPLACED

In less than an hour True Blood fans will finally have a new episode to enjoy! Episode 45-“Burning Down the House” looks like it will be full of action. I added some more rehearsal photos from filming that was for this episode. The gallery below contains those images showing Alexander Skarsgard, Kristine Bauer van Straten and Stephen Moyer in full vampire mode. Waiting has really sucked for me. I saw the rehearsal and filming for this in June and have been anxiously awaitng the airing of the actual action. Images are spoiler in nature!

UPDATE: Looks like we have to wait till next week! The preview trailer for episode 4.11  did show the action in the image above (but from a longer distance:

I still say that Eric might be offering up himself in exchange for Sookie. When I watched the rehearsals neither Sookie nor Marnie were on the street. This is what it really looked like. (it’s amazing what they do in editing!)

So yes WAITING SUCKS! What will happen. (ok I know what will happen) More in speculations. Here’s a hint: Pam will take matters into her own hands.

The screencaps for the promo trailer for 4.11 are here:

There are other images as well on the page on this link: