Congratulations to Alexander Skarsgard for his win tonight! He won a SAG award for Outstanding Performance by a Male Actor in a TV Movie or Miniseries. He won for his role in HBO’s “Big Little Lies”. He looked pretty surprised to win! He did an amazing job in his role as Perry Wright but was up agains tough competition including Robert DeNiro! Alex is on a roll so far winning an Emmy, Golden Globe and now a SAG award for his role in Big Little Lies! So happy to see him win!!

Alexander Skarsgard takes home the Actor® for Outstanding Performance by a Male Actor in a TV Movie or Miniseries! #sagawards 🎭 pic.twitter.com/40OJLZfEtK

His co-star Nicole Kidman also won a SAG for her role in Big Little Lies! 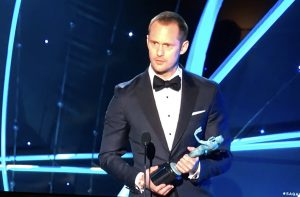