We were all pretty busy last weekend trying to keep up with all the gorgeous new photographs of Alexander Skarsgard coming out of his promotional trip to Sundance, but in the midst of all the  madness, his movie “Diary of a Teenage Girl” became a big festival hit with the critics and audiences alike.

Below are some of the highlights from some of the great reviews, each with a link below to click for the full feature.

Most impressively, however, Heller maintains the book’s seriocomic ambivalence — which makes sense when reading the bright yet very immature first-person meanderings of a 15-year-old mind circa 1976 on the page, but might easily have curdled into sensationalism or grotesquerie onscreen. Minnie probably doesn’t know what the word “pederasty” is, and doesn’t think of herself as a victim. But at the same time, she’s very badly served by her lack of responsible adult role models — Mom, Monroe and their friends seem to be living improvisational lives that any children must just fit into as best they can.

Faithful to the book’s vision (if more physically attractive), Skarsgard makes Monroe so easygoing and likable you sometimes forget that his passivity is actually a contemptible willingness to let his libido make decisions by default — for which he then blames “manipulative” Minnie.

END_OF_DOCUMENT_TOKEN_TO_BE_REPLACED

The lovely admin of this site and I both requested an ‘Advanced Readers Copy’ of Dead Ever After, the final installment of the Sookie Stackhouse series for our sites (Eric and Sookie Lovers for me) a little over a month ago. We waited and waited (patiently I might add) and every day nothing came in the form of a package. We gave up hope, realizing that they were not going to give the final book away early just to have it spoiled online early,(not that we would have done such a thing mind you) and who could blame them? Little did they know that it would be leaked all over the internet two weeks before publication due to a book seller putting the book on the shelf early. *snickers*

The UK released the final book on Monday, the day before the release date and we were fortunate to receive a copy as well. We spent the night reading the book even though we already knew EVERYTHING before hand. I could not believe all the time, energy and money I wasted on this books series for the book was truly awful. According to what the author wrote about her characters in this book, I found that I did not know who these people were at all. I started writing my review immediately after I was done reading and I admit to having a pretty foul mouth due to my feeling duped and manipulated. This post will be slightly cleaner but it is a good thing my girls at Eric and Sookie Lovers do not mind my language in the slightest.

I wrote my review and chatted about it with my fellow Viking Wenches for a while (which is tremendous therapy) I forgot all about the ARC I requested so long ago. My buzzer rang on the Wednesday following release day and I let who I thought was the medicine man with a delivery in through the main door. I answered the knock on my door and it is the UPS guy with a bubble-wrapped package from none other than Penguin. I thanked the man, shut the door and immediately said thought “Oh this cannot be what I think it is ” but it was a hardback copy of Dead Ever After along with a copy of the WJS article. 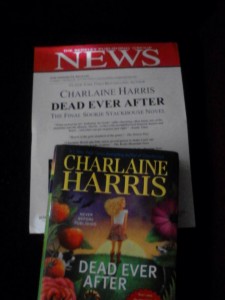 The fact that I was stunned is an understatement but I was also very, very upset and angry. I thought to myself, “They know the site I write for is “Eric and Sookie Lovers” did they honestly think I was going to be excited by the blatant assassinations of two of the most beloved characters? While I am glad they granted my request, I felt as if it was a slap in the face of all that we held dear.

I received a text from my dear friend who runs this site on Thursday (two days after the release)that she received her hard copy as well from Penguin. We both had the same reaction, our request was granted but now we felt like it was a ‘late review copy’.

Since we have received an ARC or LRC (*snickers again) we thought it would be appropriate to give our opinion of the final Sookie Stackhouse Novel. I was highly emotional in my first review of the book and I am a tad more calm so perhaps I can do this in more of an orderly fashion. Although I have to say, I do love what I wrote at ESL.

THE PROLOGUE TO BEAT ALL PROLOGUES (NOT REALLY)

I did not care for the prologue at all because it seemed so out of place in a Sookie Stackhouse Novel. The author attempted to give the readers an air of mystery surrounding the ‘businessman’ and his ‘driver’ along with the ‘medium man’ and the ‘tall man’ but failed miserably at it. I was disappointed in the whole ‘we will hear different POV’S this time around’ for it was very, very boring. I would have rather heard the POV’s of Eric, Pam, even Bill because at least they were more centrally located to Sookie.

What beef….I mean plot? Well, there was an attempt at one but it was less than stellar. Sookie was accused of murder and all her friends rallied by her side to prove her innocence. Well,with the exception of those that had been by her side for the better part of 12 books but in the end they did not matter. Who cares if the author spent time developing those relationships, only to have them not mean a damn thing at the end of the story. Claude is the reason behind the framing and the reasoning behind it (1) Niall was going to close Fairy(something he planned to do already) and (2) Sookie would not have sex with him. Well, that is some mystery!

ERIC AND SOOKIE: MUCH ADO ABOUT NOTHING

What happened to these two characters was a low down dirty shame. I am okay with them not ending up together at the end. What I am not okay with is what was done to them. What I read was that the author had Eric give up without a fight to maintain his freedom and that goes everything she wrote about Eric previously. Gone was the bad ass Viking vampire and that was sad. The author took away everything that was good and pure about his character and turned him into someone 99.9% of the fan base did not recognize. There were a lot missed opportunities that could have made this a great end to a once beloved series if the author had stayed true to her characters. Sookie and Eric got the worst end of the deal.

Sookie ended up settling for a maybe HEA with Sam because her choice, Eric was taken away. She was willing to leave her home and Bon Temps life behind to be with Eric and all that was gone in the blink of an eye. They both just simply gave up. Sookie sat back and let everything happen, she thought more about her tomatoes than anything. While everyone else went about proving her innocence, she sat around her house, cooking and thinking. Where was the Sookie that took matters into her own hands? Where we these friends of hers before when she needed them?

I was looking for a battle of epic proportions and I did not get that. The lesson here seemed to be, don’t fight for what you want because it won’t do you any good. There seemed to other messages but I won’t get into them for I will just end up with a headache. I am not getting into the HEA either because I have beat that dead horse into the ground already.

I finished this series because I owed it to myself to do so and this was after I knew EVERY single SPOILER that was out there. It was very, very painful to read abut my favorite characters going out like that. I was expecting them to out with’a blaze of glory’ and I got nothing for sticking with this series. There is something to be said about expectation when reading a final book in a series but another entirely when those expectations are not met? From beginning to end,this book was a huge disappointment and it failed to satisfy many of it’s long term readers. Who is to blame? The author, for leading the readers down a path she was never going to follow or the reader for putting their faith and loyalty in that said author? According to the author, we just were picking up what she was putting down. The bottom line: I cannot trust the author to deliver the goods.

I know what I read and I did not get it wrong. I have been reading for a number of years and I write myself so I understand that characters can start to take on a life of their own(and become more)so sometimes what an author intended to write has to be changed to accommodate that and the author failed in this regard. I know what I read in regards to characterization in the previous books and the characters assassinations of beloved characters just to the authors original end game was heartbreaking. It went against previously established narrative regarding those characters. It was not in Eric’s character to just give up and take it,he ended up loosing everything he had achieved in his 1000 plus years. He now has to ask permission to do anything, and that is is including spending his own money. He went from being a big fish in a small pond, to a little fish in a big pond.

Sookie ended up right back where she started, all the personal growth she experienced in her time spent with the vampires was gone. Everything she had done to survive had truly been for nothing. She won’t truly be safe from anyone as Karin will only be there a year and who is to say that no vampire will come for her then. Felipe and Freyda can promise that she won’t be used, abused or bitten by any vampire ever until the cows come home but they do not control every vampire, especially those in states that they do not control. Victor can’t spread himself any thinner than he already has and there is not guarantee that his kingdoms won’t be taken over, same with Freyda. It really was a sloppy,lazy ending to what could have been an awesome ending to a once beloved series. Who was Sookie anyway? I am afraid we will never know. Goodbye Miss Stackhouse. 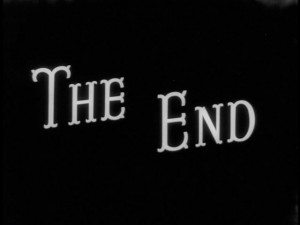