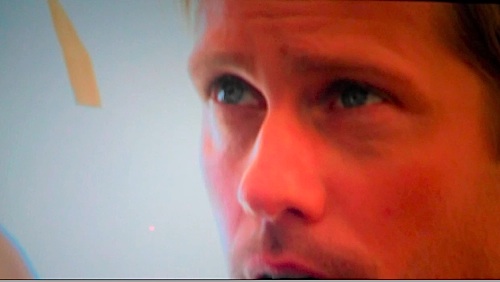 The June 2001 edition of GQ features Alexander Skarsgard on the cover. For iPad owners you can download their app and view the video from the photoshoot. The video size for the screen is not large but at least there is something for fans to see (for those without an iPad). Huge thanks to Pb for uploading the video!

The June 2011 issue of GQ magazine features True Blood’s Viking Vampire Alexander Skarsgard. The interview and photoshoot are going to make this a very popular issue with many of Alex’s fans. I was able to find a copy of the magazine at my local store (ok I bought most of the copies ). Very well worth the cover price. For the full interview please visit GQ.com link here. (but I highly recommend purchasing the issue-the images look even better in print versus the computer screen)

All of the magazine scans are found under the heading with that title. The page for this GQ issue is found here: 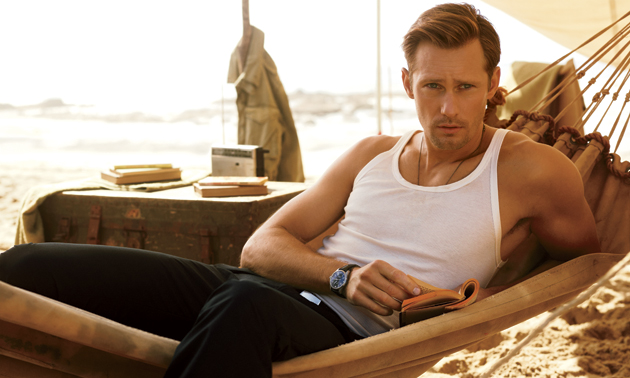 The June GQ will have amazing photos and a great interview with Alexander Skarsgard. Link to the full interview below. Here is an excerpt:

It’s hard enough on a healthy male ego just kind of standing around a guy like Alexander Skarsgård, whose Viking physique, showcased to such great effect on HBO’s True Blood, tends to make one feel small and soft and generally shabby in comparison. One does not need the extra discomfort of being humiliated by his dad. Skarsgård’s father, Stellan, happens to be Sweden’s biggest movie star, best known on these shores as the quadriplegic roughneck in Lars von Trier’s Breaking the Waves or as the Swedish travel writer performing off-key ABBA songs in Mamma Mia!, depending on how you like to think of yourself. I’d called Stellan in Stockholm and informed him I was going whale-watching with his son. “Ever since he went whale-watching, he won’t stop talking about it. Everybody has to go! It’s a plague!” he affectionately complained. Then came the setup: “Listen,” he said, the lugubrious voice oozing authority. “Bring a sweater. It’s cold out there.”

In True Blood‘s ever expanding ensemble of fairies, werewolves, shape-shifters, telepaths, werecats, telefairies, vamp-shifters, and God knows what else, his Eric has become a solid center—the only character to display that essential quality shared by great HBO antiheroes past (think Tony Soprano or Omar Little or Al Swearengen): genuine unpredictability. Skarsgård’s minutely calibrated deadpan somehow makes him the show’s funniest, most cerebral, and most ferally frightening personage. “He does this thing with his eyes,” says creator and show-runner Alan Ball. “It’s like they become slightly unfocused and all of a sudden they’re mirrors to this ancient, 1,000-year-old soul.” Indeed what Eric is, his relative humanity, may be the only moral mystery to be found amidst all the steamy, gothic froth.

Not that Skarsgård emerges suds-free. Those rooting for Eric in the increasingly explicit love-blood triangle he shares with Anna Paquin’s Sookie Stackhouse and Stephen Moyer’s Bill Compton are surely aware of the extra frisson provided by Paquin and Moyer’s real-life marriage. Does it also mean on-set awkwardness?

“It’s really clear to Steve and to everybody else what the deal is—which is that Anna is like a sister to me,” Skarsgård says. “Those love scenes take quite a bit of acting, actually. A lot of acting.”

Great photos and interivew in this issue of GQ!