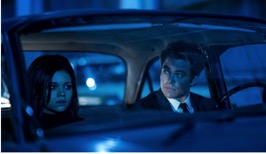 Written by Sam Sheridan and inspired by true events, I Am the Night  tells the gripping story of Fauna Hodel (India Eisley ), a teenage girl who is given away at birth, and grows up outside of Reno, Nevada. Fauna lives more-or-less comfortably with the mysteries of her origin, until one day she makes a discovery that leads her to question everything. As Fauna begins to investigate the secrets of her past, she meets a ruined reporter (Pine), haunted by the case that undid him. Together they follow a sinister trail that swirls ever closer to an infamous Los Angeles gynecologist, Dr. George Hodel (Jefferson Mays ), a man involved in some of Hollywood’s darkest debauchery, and possibly, its most infamous unsolved crime.