Just got this press release from ComicXology!

Meet The Folks Behind Comixology At Our First Comic-Con Tweet-up, Including Two Of The Co-Founders

Find Out What’s Next At The Comixology Panels! 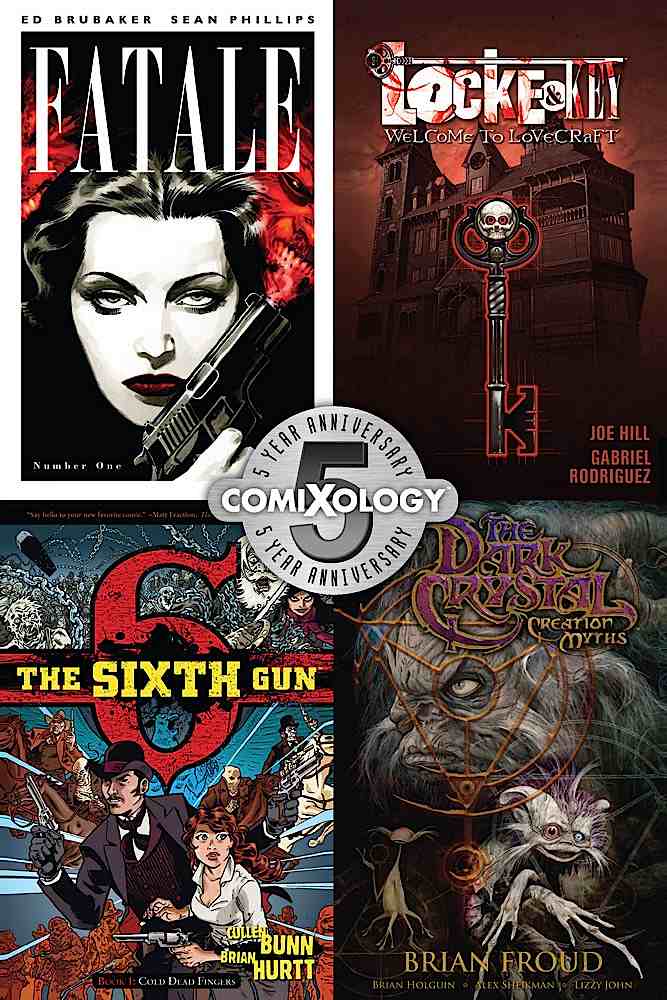 July 2nd, 2012 – New York, NY – ComiXology — the revolutionary digital comics platform with over 75 million downloads to date and a selection of more than 25,000 comics and graphic novels — is kicking off this year’s Comic-Con International 2012 in style by celebrating their 5-Year Anniversary and 3-Year App-iversary with a whole host of programming, a “Tweetup,” two opportunities to win a free iPad, publishing partner promotions, and, for the first time ever, comiXology will be manning a booth (#2547) in the heart of Comic-Con!

The celebration of comiXology’s 5-year Anniversary and 3-year App-iversary begins on Preview Night at the debut of comiXology’s new booth space (#2547) and continues all convention long! All comic fans are invited to have a hands-on look at the leading digital comics platform and all fans that register for comiXology’s newsletter at the booth will have a chance to win a brand new iPad!

But the comiXology booth is only where the celebration begins! Each day from Thursday to Sunday, one of comiXology’s many publishing partners will be giving away one of four limited edition postcards that has a promo code for a free comic or graphic novel! Once all four cards are collected, a larger image is revealed celebrating comiXology’s anniversary! 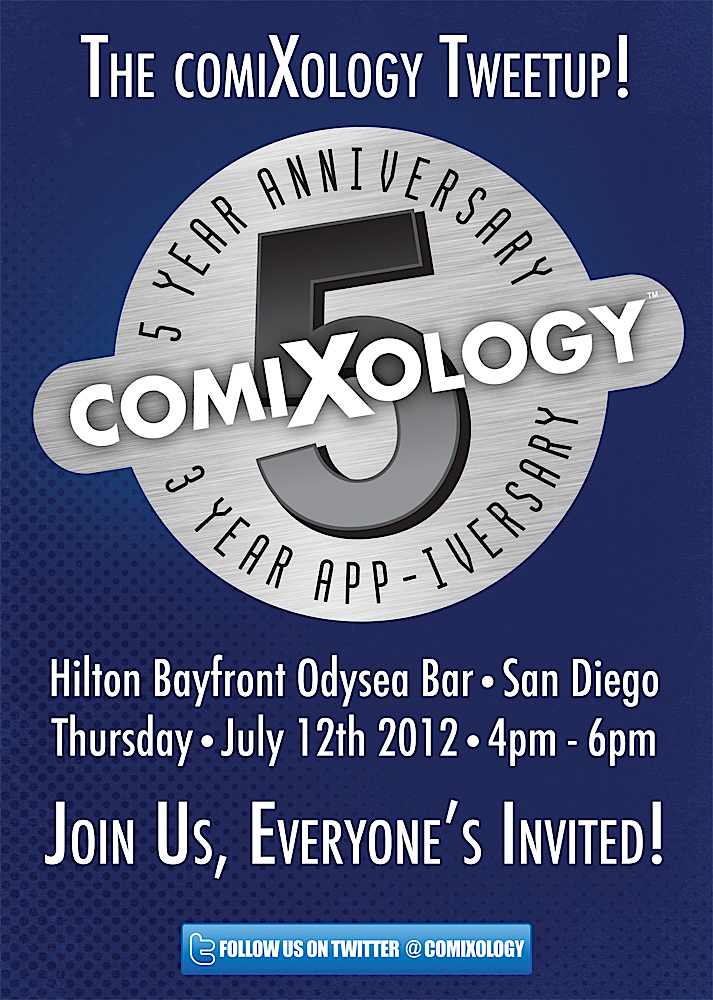 Don’t get distracted while you are busy collecting all those postcards and miss a rare chance to meet part of the team behind comiXology! On Thursday July 12th from 4pm to 6pm, all comiXology fans and new users alike are invited to join us for the official “ComiXology Tweetup” at the Hilton Bayfront Odysea Bar where attendees can meet and mingle with the folks behind the award-winning digital comics platform — comiXology co-founders David Steinberger and John D. Roberts as well as team members Matt “Slim” Kolowski, Bronson Lingamfelter, Chip Mosher, Kevin Pearl and Elizabeth Yulianto. As a sincere “thank you” to our fans, one lucky attendee will win an iPad during the Tweetup!

If that’s not enough for you, then make sure you don’t miss any of the six panels that comiXology will be present at, including two comiXology focused panels! Join co-founders David Steinberger and John D. Roberts with Power Play artist Reilly Brown for the “Creating Comics the ComiXology Way” panel on Thursday July 12th at 2pm in Room 11AB to discuss how comiXology is transforming not only how people read comics, but how people create comics. Then on Saturday July 14th in Room 23ABC don’t miss the “ComiXology Open Discussion: Everything Digital” where comiXology co-founders Steinberger and Roberts talk about the first five years of comiXology and field your questions about anything and everything under the digital sun!

You will also find comiXology represented on four additional panels, with comiXology co-founder and CEO David Steinberger participating in the “Comic Book Entrepreneurs” panel on July 13th at 1:30pm in Room 8 and then with comiXology co-founder John D. Roberts joining him on the “Are Digital Comics Expanding the Market?” panel later that day at 6pm in Room 9. ComiXology’s VP of Marketing, PR & Business Development, Chip Mosher, will be moderating two panels — the “Indie Comics Marketing and PR 101” panel in Room 8 on Thursday July 12th at 7pm and also the “Digital Comics Price Fight” panel on Sunday July 15th at 11am.

Comic-Con International 2012 looks to be the biggest Comic-Con for comiXology so far. We can’t wait to see you there!

Booth Giveaway: ComiXology fans can register at the comiXology booth (#2547) all during CCI ’12 to win a new iPad. After the show ends, one iPad will be given away at random to one of the registrants.

Party Giveaway: During the party, one iPad will be given away at random to one lucky attendee.

11:00am – 12:00am — ComiXology Open Discussion: Everything Digital — With over 75 million comics and graphic novels downloaded since its debut, comiXology has revolutionized how people read and buy comic books. Recently hailed by the New York Times as the iTunes of comics, here is your opportunity to discover what is next! Join comiXology cofounders David Steinberger and John D. Roberts for an open discussion on everything digital. All topics are game! Don’t miss out! – Room 23ABC

About comiXology
Founded in 2007 with the mission of bringing comics to people everywhere, comiXology — in just five short years — has revolutionized the comic book and graphic novel world. From creating the industry leading platform for digital comics to tools and services for brick and mortar retailers, comiXology has lead the charge in exposing new audiences to the rich history and culture of comic books. With the development of the Comics by comiXology digital comics platform — available across iPhone, iPad, Android, Kindle Fire and the Web— comiXology provides the easiest way worldwide for people to enjoy comics at just the click of a button! Regularly ranking as the top grossing iPad app in the entire iTunes App Store, Comics by comiXology was recently selected as a preloaded app on Amazon’s Kindle Fire. Providing digital comics across multiple platforms, comiXology will not stop until everyone on the face of the earth has been turned into a comic book fan.