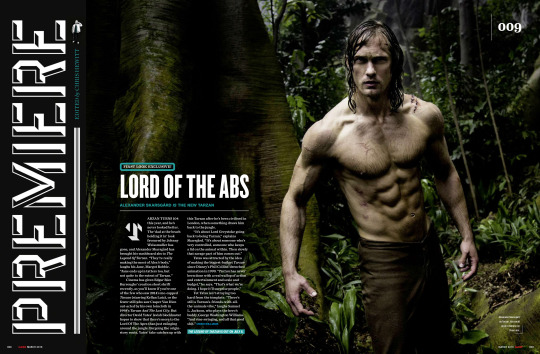 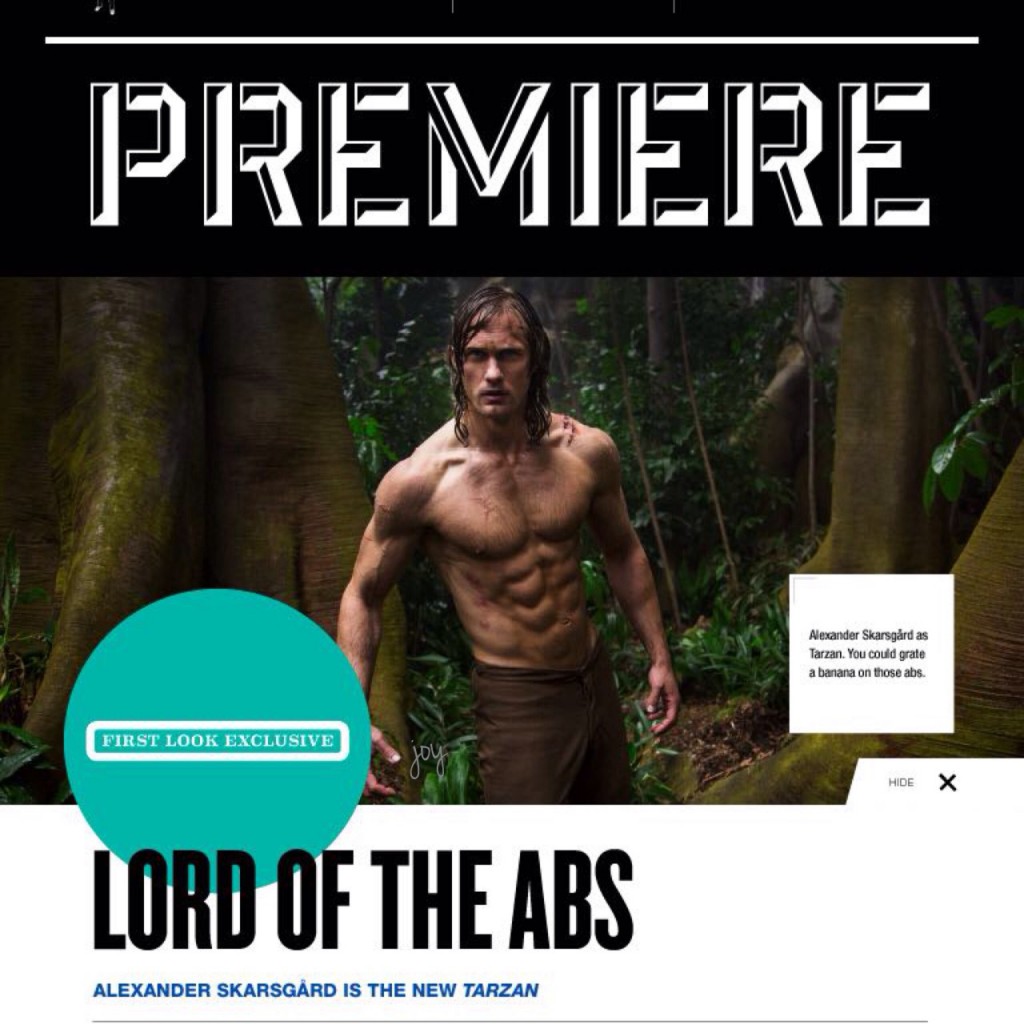 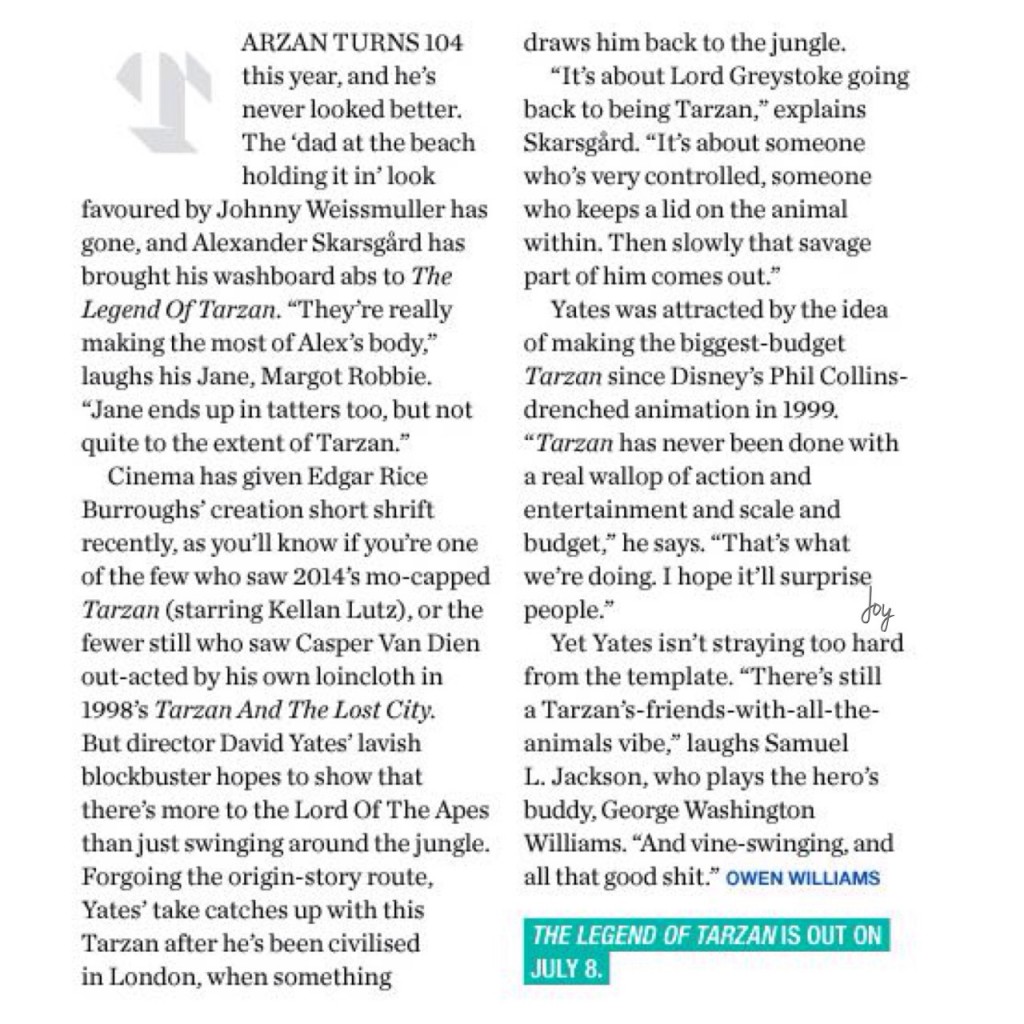 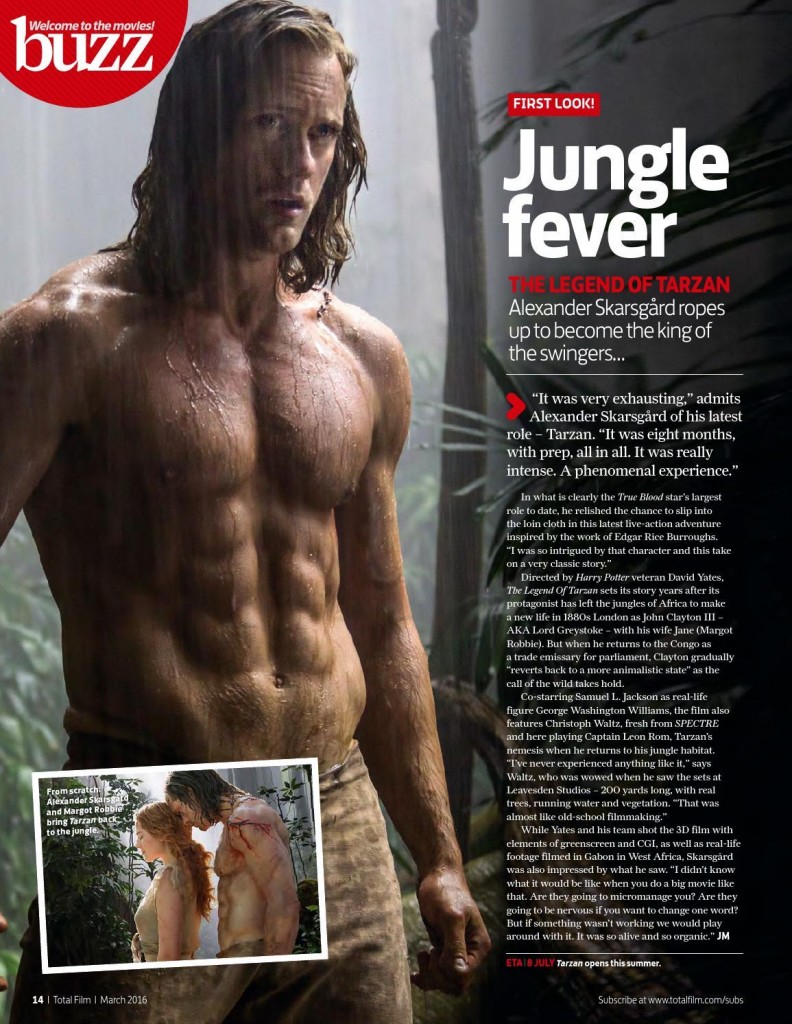 There’s a full page article on The Legend of Tarzan in the latest digital issue of the UK based movie magazine Total Film. Huge thanks to skarsjoy to posting the above scan. 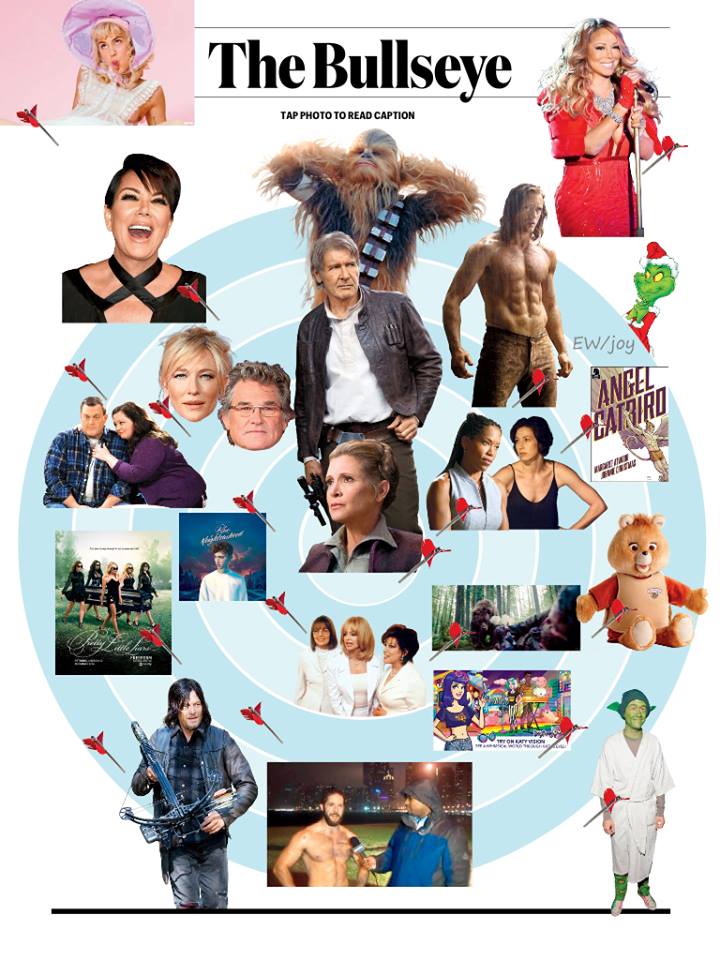 Alexander Skarsgard as Tarzan is one of the stars featured on Entertainment Weekly Bullseye, in their New Year’s Eve digital issue. 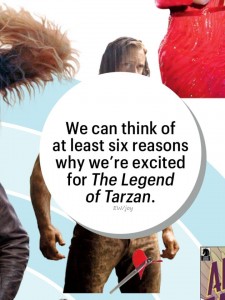 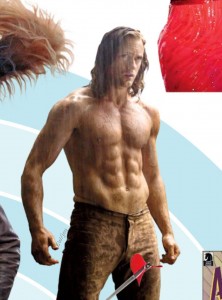 If like me, you’re more than ready and willing for the build up to the release of The Legend Of Tarzan to really kick in next year, then you’ll probably appreciate a little trailer analysis to keep you going over the cold winter months. So if you’ve got a spare 20 minutes or so during the festive period, just pour yourself a nice glass of Christmas mulled wine, pull up a comfy chair and settle back to find out more about Tarzan 2016 with this trailer review from Beyond The Trailer. 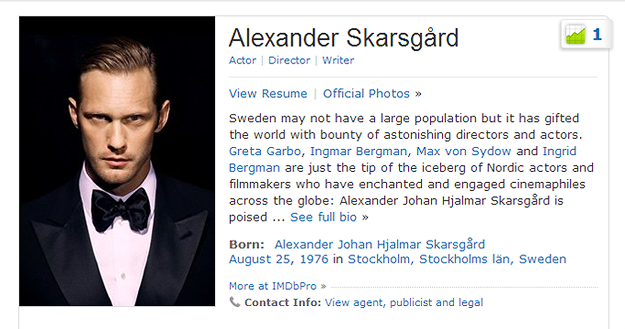 That’s right folks, our King of the Jungle is finally sitting pretty at the top of the tree. Following the hugely positive reaction to the first images of Alexander as Tarzan, and the first trailer appearing on-line, our main man is the number one actor on IMDb this week.

It’s good news for The Legend of Tarzan too, which has risen 655 places to number five on the movie database. Margot Robbie completes the jungle rampage, looking gorgeous at number two.

The official trailer itself now has over 9,700,000 views on Youtube and is on course to hit the magic 10m mark very soon.

We could, at this point, post lots if nifty little celebration gifs, but I can’t be bothered so instead I’m just going to repost some random picture that just happens to be laying around…… 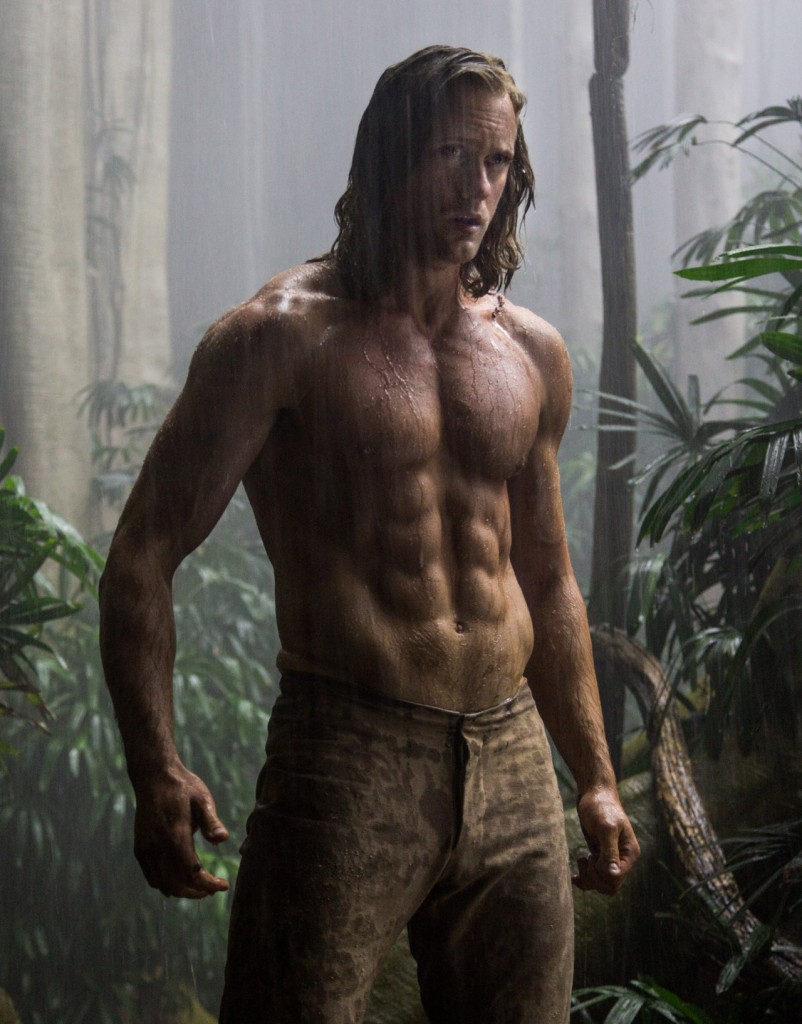 Hot on the heels of the very first “The Legend of Tarzan” teaser trailer, ET have released a short behind the scenes video for our repeated enjoyment. Here’s a first look at Alexander working on the movie. 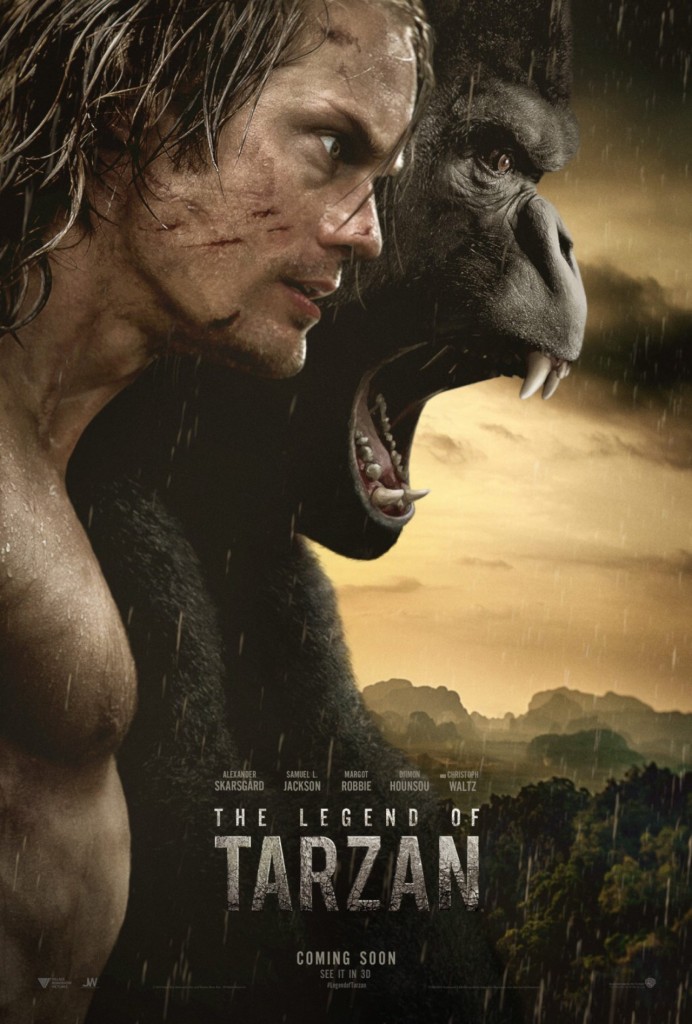 A must follow for all Alexander Skarsgard fans is the brand new official Twitter account launched today by Warner Bros for “The Legend of Tarzan“. They’ve already posted the first poster (above). Click on the image below to check it out… 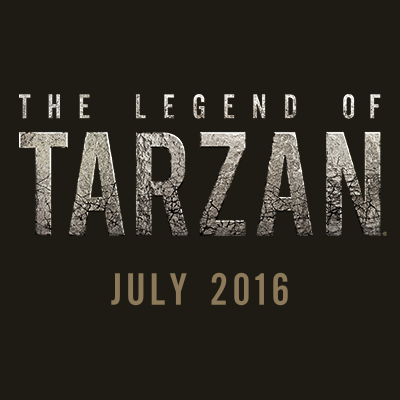 Don’t worry if you are not on Twitter or Instagram, we’ll be keeping a close eye on the accounts over the coming months and will make sure you don’t miss a thing!

Here it is, the moment all the fan-girls and boys have been waiting for, the first images of Alexander in the role of Tarzan. Thank you Warner Bros for this rather wonderful early Christmas present. As well as getting our first glimpse of Tarzan looking suitably hot and brooding, here’s a first image of him with his great love and wife, Jane (Margot Robbie). 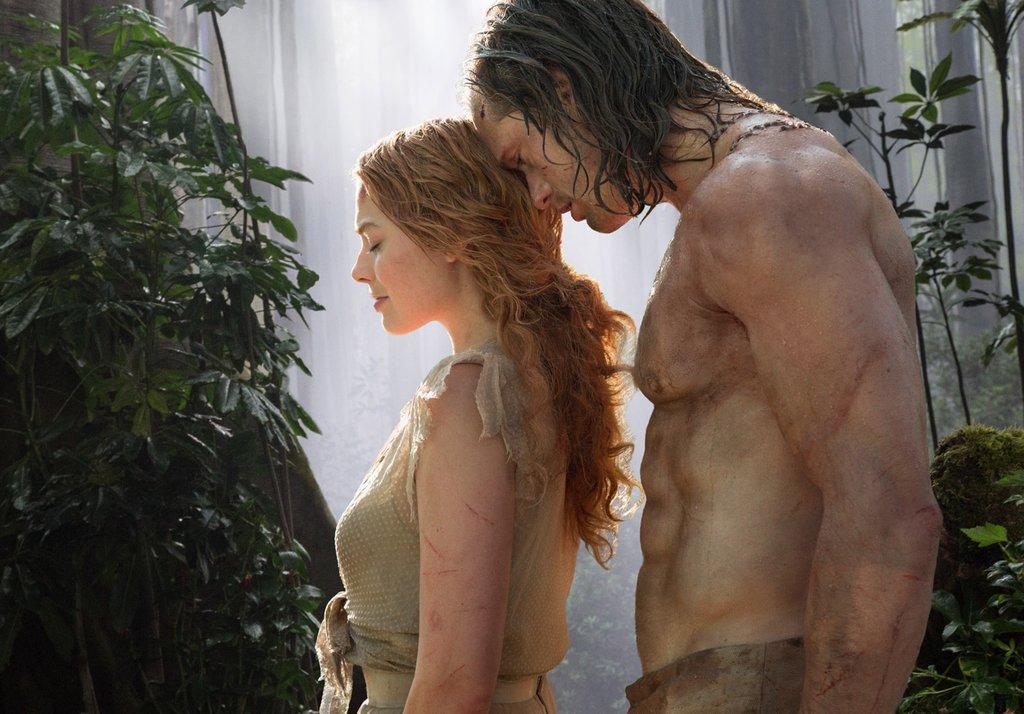 The photos and the article below are from USAToday

Welcome back to the jungle, Tarzan.

Lots of action, adventure and apes are on tap for the next incarnation of the iconic Edgar Rice Burroughscharacter played by Alexander Skarsgård (True Blood) in The Legend of Tarzan (in theaters July 1). And for director David Yates, it was a way to return moviegoers to a wondrous Africa in a properly romantic way.

“They haven’t been there for an awfully long time,” says Yates, who directed the last four Harry Potterfilms.

Legend takes a different approach to Tarzan than Burroughs’ 1910s writings, the 1930sJohnny Weissmuller movies and other pop-culture adaptations that focused on the man being raised by simians and becoming lord of the jungle. Instead, the movie finds John Clayton III, Lord Greystoke, a decade removed from his home in the Congo and fully entrenched as a British gentleman in 1880s Victorian London, with his beloved wife Jane (Margot Robbie) by his side.

He’s left his African home behind — his early days are seen in flashbacks — but is constantly reminded of his earlier exploits and gets invited back as an emissary of Parliament. While hesitant at first, Tarzan eventually returns to the Congo, old friends as well as Jane are put in serious danger, and his latest cliff-jumping, vine-swinging story kicks off from there.

“It’s almost the opposite of the classic tale, where it’s about taming the beast,” says Skarsgård, 39. “This is about a man who’s holding back and slowly as you peel off the layers, he reverts back to a more animalistic state and lets that side of his personality out.”

The cast also features Djimon Hounsou as Chief Mbonga, Samuel L. Jackson as the real-life figure George Washington Williams and Christoph Waltz as the Belgian antagonist Captain Leon Rom. There’s a historical backdrop for the movie, says Yates: Belgium’s King Leopold II, originally thought of as a philanthropist, took the Congo as his own colony in the 1880s and was responsible for a mass genocide that killed millions.

Jane has always factored heavily into the Tarzan mythology, and Yates envisions Robbie as a 21st-century take on the character who’s “in no way a passive partner to Tarzan. She’s a really strong, assertive, beautifully knowledgeable, very sexy modern woman who can more than look after herself,” says the director.

“In a way, it’s a story of two human beings and how they save each other.”

Yates also found Skarsgård a perfect Tarzan for 2015. The filmmaker liked that he was born in Sweden but found a career in America, so “he has this wonderful quality of not quite belonging to one or the other.” Plus, there was a distinct grace and physicality to the 6-foot-4 actor.

To get in Tarzan shape, Skarsgård spent four months in an all-consuming training regimen before principal photography started. “I basically didn’t see my family or my friends,” he says, though he adds that the part “was definitely worth getting up at 4:30 in the morning.”

Skarsgård also partnered with choreographer Wayne McGregor to figure out the movements and posture of a guy who carries himself as an upper-crust Englishman yet ultimately re-embraces his wilder side when he returns to his Congo home.

“He works mostly with the best contemporary ballet dancers in the world, so it was quite unusual for him to work with somebody like me who can’t touch their toes,” Skarsgård quips.

Africa itself is a main character in the movie, according to Yates, who tapped Pottercollaborator Stuart Craig to design his Legend of Tarzan sets. To capture the jungle flavor, two hangars at an old English airplane factory were transformed into soundstages 200 yards long with real trees, vegetation, running water and mountainous areas. Green screen and CGI were used, as well as natural elements photographed in Gabon to add richness to the fully realized environment.

“A lot of movies, you have to go to the far reaches of the galaxy to find extraordinary beauty and amazing things,” Yates says. But, he adds, “they’re right here on the planet. They exist just a few thousand miles away.”