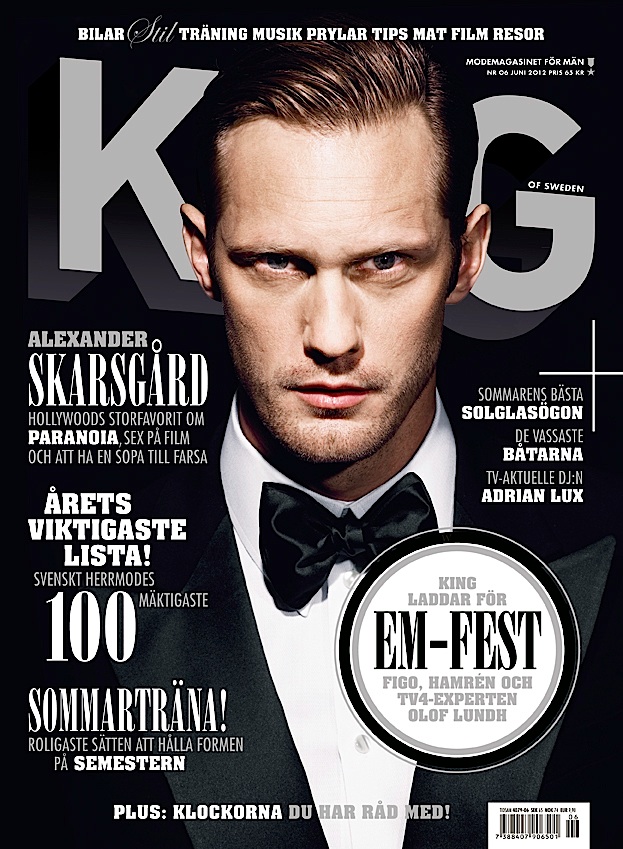 Translation of the swedish interview:

”My dad is a douchebag”

The interview takes place in the legendary Universal Studios facilities as Alexander just finished making a big action movie here. In Battleship, based on a computer game, he plays against another rising Hollywood star – the five year younger Canadian Taylor Kitsch. They play brothers who get a tough military mission.

– It’s been a great time. The combination of making Melancholia and then Battleshipwas fantastic. For me, it is always about finding new challenges and making new discoveries. It satisfies me in several different ways to first take part in a Scandinavian arthouse project and then do an action movie like Battleship. In addition, I’ve just finished making three movies where I’m not type casted as a sexy “hunk”.

The movies he refers to is the East, What Masie knew and Disconnect. In the East, he plays the leader of a mysterious anarchist organization called just the East. What Masie knew is an adaptation of Henry James’s novel about a child who is drawn into the parents bitter divorce where Skarsgård plays Julianne Moore’s new husband. And inDisconnect, where Michael Nyqvist also have a role, Alexander plays a former Marine who has become emotionally cut off from his wife – and have an affair. Apart from the fear of getting type casted, the 35-year old suffers from performance anxiety and the eternal fear of not being good enough.

– I hate failing. It’s something I have thought about a lot because you are right that it is important to make mistakes. It is encouraging to learn from your mistakes. I think it was Samuel Becket who said “Ever tried. Ever failed. No matter. Try again. Fail again. Fail better.” You learn a lot from that and risk a lot more if you chose to try and fight it.

What do you mean with not succeeding?

– It is always introspective. If I don’t go for it a hundred percent or if I don’t live up to my own expectations.

Being the son of Stellan Skarsgård could of course be a source of performance anxiety in itself. But Alexander Skarsgård thinks it’s the other way around. He has the family to thank for a down to earth upbringing. Although his parents recently divorced and the fact that his mother My during Alexander’s childhood was suffering from both cancer and alcoholism, the family stands together and is the foundation of his life.

– Sure, it can make me a bit vulnerable not always knowing what is going on back home. It can be frightening not having the family close. We are a large family with strong ties and when I lived in Stockholm, we were all close to one another. Suddenly I’m 5000 km away.

When Alexander Skarsgård was little, his dad Stellan was his great idol who could do no wrong. But as he grew older, Alexander changed his opinion and the dad was no longer a superhero. At the same time Alexander realized that you can’t relate on a deeper level if you idolize the other party. Maybe it also helped playing against the dad inMelancholia, where they were equals and played best friends.

– My dad is a “douchebag” , says Alexander Skarsgård and laughs.

– My dad is one of my best friends and I respect him tremendously. We worked together for the first time in 1983 in Sweden, in an animated movie where we did the voices individually so Melancholia was really the first time that we actually played against each other and it was absolutely fabulous.

Alexander Skarsgård may be about to reach the top in Hollywood, but it doesn’t seem to have affected him as a person. He is friendly and accommodating. He could be any Swedish guy from Stockholm who just happens to have had a special career and ended up in Hollywood. A guy who once got teased and ran home to mom. To be yourself and to cherish your individuality is important, says Alexander. Especially now when his career has taken off for real.

– I would like to have new friends and not just think ”Ah, that’s because I am famous”. But I think that you fairly quickly notice if people are sincere or not and if they want to be friends with you because they like you or if they think that you’ll take them to the cool premieres. People’s true nature is revealed quickly.