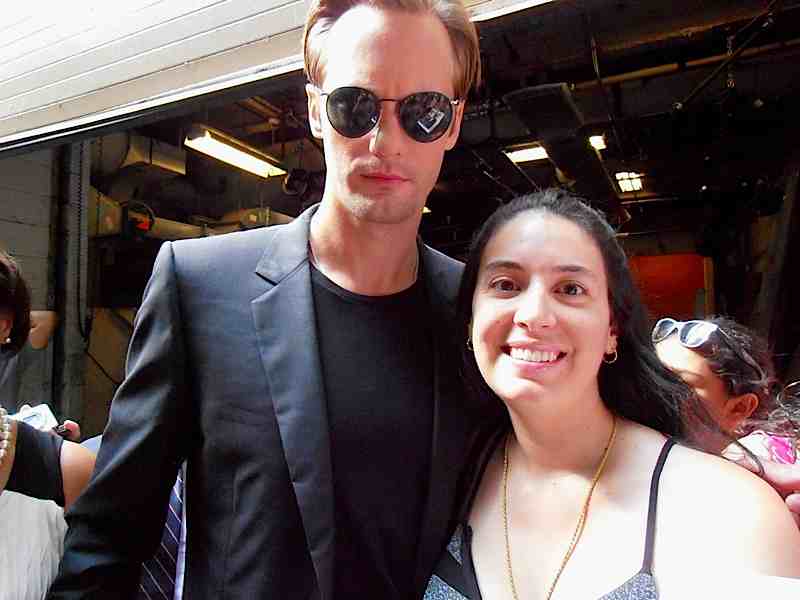 This page will be for new photos of Alexander Skarsgard with his fans. The first gallery below is from a lucky fan in NY who was able to have her photo taken with Alex outside of the Regis and Kelly show on 8/3/11. Her luck did strike twice when she was able to get another photo with him a few days later! (Just Jared got the image of her taking her photo with him with her phone)

A huge thanks to her for allowing the use of her photos. The images are hers and please do not use without proper photo credit.

Here’s what she wrote about her time waiting for him outside of the Regis and Kelly show:

Alex arrived at 8:30 am and when he got out he waved to everyone and said he had to go in but he promised he would come back out. He didnt come back till 9:50 so we talked about Eric/Alex and TB to kill the time.

This security guard comes out telling us Alex is coming out soon and he will go from left to right and sign stuff. To stay calm and he will get to all of you. Alex come out and course ppl starting move all over. The guard was like stay put lol. Dont push. He went around and signed 1 item each and took a pic with everyone. It was hard to get to him cause you kind of moved with the crowd lol. Bye the time he came out 45 ppl had to be waiting. 1 person asked him to bite her and he laughed. The 11 yr old got her pic with him she was so cute she was holding her hand over her heart lol. Some pushing to make sure ppl got to him but nothing nasty. It was a good crowd for the most part. He signed my GQ first then he took the pic with me. When it was over he thanked all of us for showing.

She also was in the area when Alex was walking in NYC and got the second image taken with him. Talk about luck! Awesome. He was so nice to her and was seen smiling after she took her photo with him. Awww!