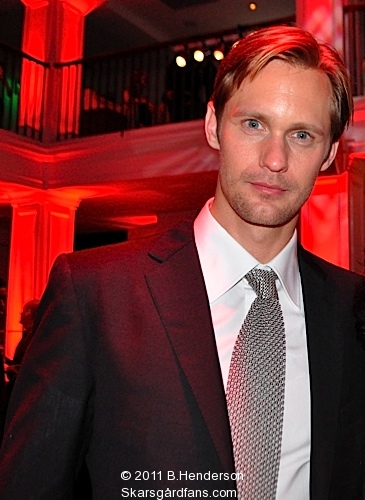 On 6/11/10 I had the pleasure of conducting a phone interview with Alexander via Skype. The below is what I wrote up on the main fan site:
It has been an amazing week for me as admin for this blog and fansite alexander-skarsgardfans.com. Today I finally had the opportunity to conduct a phone interview with Alexander Skarsgard. His time is not very plentiful but I was grateful that he took the time out to speak with us. I tried to ask other questions concerning some of his upcoming roles ie. his character of Charlie in “Straw Dogs”. No worries True Blood fans I did ask several questions concerning his role as Eric Northman. He did not want to reveal too many spoilers but did say he really enjoyed doing the flashback scenes this upcoming season especially the one involving his human family. (I mentioned how excited fans were to meet them as well but he was really excited about meeting them too!)

I have uploaded the audio podcast (click below to access)  thanks to all for visiting the blog and supporting our fan site that has been dedicated to Alexander Skarsgard since 1/2009!

I apologize for all the gushing but honestly it was hard to not be a fan while doing the call. The reason for the creation of the website was for others to learn more about Alexander Skargard since he did not have a lot of fans as of yet in the US when we started the site (and also he was almost absent in season 1)

Below is a transcript from the audio interview conducted June 11, 2010:

B/Skarsgardfans: What was your favorite scene to film for  season  3 of True Blood?

Alexander : Well, that’s always hard to answer. I think it’s so difficult because I don’t want to divulge too much. I do enjoy the flashbacks very much. Those are always a lot of fun to shoot. THere are actually a couple of really cool flashbacks (for S3) and one where Eric sees his human family. That was a lot of fun to shoot. We all shot the entire scene in Swedish here in L.A. That was a little weird but it was fun.

B/Skarsgardfans: That’s great that we will get to see some flashback scenes. I know fans are looking forward to seeing your human family.

Alex: And so was I! I was definitely looking forward to that. It’s great to get out and get to know about Eric and his past. He has been around for a long time.

B/Skarsgardfans: I have seen some interviews where you mention that this is about “revenge” a little bit in season 3. I have a “feeling” it might have something to do with some of the flashbacks (we will be seeing–I was trying to get Alex to give a little spoiler here…LOL)

B/Skarsgardfans: I know you don’t want to spoil it for fans who can’t WAIT to see season 3! In season 2 of True Blood you had a rooftop scene with Godric. For a lot of fans that scene was one of the best one’s of the whole season. The question I have is how did you get ready for so much of the emotional part of that scene?  Did you think of something really bad that happened?( In the moment, are you thinking of something you have personally experienced)

Alex: Well, that was an interesting day because we shot it on a rooftop in downtown Los Angeles. We had a window of about fifteen or twenty mintutes to shoot it. It was a kind of like in a theater where you well it’s not like usual ones where you have plenty of time to work on the scene. If you try things that don’t work you can cut and do it again. But we knew that we only had time for two takes and what we do is we set up four cameras and I remember the call time was like 4:30 in the morning. I went to bed  and I was up at four, drove downtown and went up to the rooftop. They had these four cameras set up and we rehearsed it like ten times. So we really knew what we wanted  and how to do it and how to shoot the scene.

Alex: The sun was about to come up when we shot and we went only twice. It was exciting for me because I did theater back in Sweden and I haven’t done it in a couple of years. So it was kinda like a live performance in a way that you knew that it was now or never!

B/Skarsgardfans: That’s amazing-so that scene was filmed in two takes that night?

Alex: Yah it was in two takes.

B/Skarsgardfans: So that is almost like doing live theater! Now that you mentioned theater, is that something that you would like to pursue again?

Alex: Well, absolutely, it was like I said a couple of years ago in Sweden but it’s just a matter of finding the right play and also finding a window in my schedule where I can do it obviously. I’m busy with True Blood now but at some point where I’m on hiatus or sometime after the show I would do the theater again. It keeps me on my toes. It’s very exciting to do that every now and then.

B/Skarsgardfans: That’s great. Is there a certain genre/style if you were to do theater again? -a drama or musical or a comedy? Is there one style you like best?

Alex: I’ve done mostly drama before and I haven’t done a musical. I don’t think I’ll do that. I’ve done dark comedies. I can definitely play in that kind of drama where there’s a lot of dark humor as well and it’s really a lot of fun.
We’ll see if we can time something great to play.

B/Skarsgardfans: You have a limited amount of time to work on other projects. I know that and I know we don’t want you to stop working on True Blood please! We’ve waited so long to have as much of Eric Northman as we have finally gotten in season 2 and we/fans also want there to  be more of Eric in season 3 !Alex: Oh thank you!B/Skarsgardfans:Your emotionally charged scene in Straw Dogs could be particularly difficult for fans? How do you approach something so controversial.Do you think Charlie realized that what he was doing was wrong

Alex: I try to understand the character and prepare before we start shooting and you know an hour of talking  to Rod (Lurie) and the other actors about the dynamic between Charlie and his ex-girlfriend, her new husband and finding his motivation and all the different siturations. And all that kind of drives him (Charlie) crazy.

B/Skarsgardfans: Right..he’s pushed over the edge it seems and in that scene especially.

Alex: Yah definitely. It’s really intense filled with a lot of violent things like that. We spent a couple of days filming it and we were exhaused for a couple of weeks after that.

B/Skarsgardfans: That had to be emotionally draining!

Alex: Oh it drained me completely for sure. You really have to find that anger within me some how so you can get really connected to who you are. You just can’t play it on the surface. It’s got to be deeper, and to connect and have it feel real. That’s obviously quite draining.

B/Skarsgardfans: I know that a lot of fans can’t wait to see you in Straw Dogs. A few fans have already seen a pre-screener of the film. Our co-admin Rye has seen the film. There has been nothing but acclaim for the film and how it is a great movie.

Alex: They’ve seen more than I have. I haven’t gotten the chance to see the fim yet..

B/Skarsgardfans:You have mentioned that in Sweden you felt you were hampered by being offered the good looking-boyfriend roles.  Aside from GenKill, your American roles have been closer to the ‘bad-boy”  ie “True Blood”, “13”, “Straw Dogs”)  What are your plans to avoid another type cast in this direction?

Alex: No I’m not (worried) because I haven’t been in a lot of darker characters back in Sweden. I was very excited to get a chance to do something like Eric or Charlie in Straw Dogs. But no, um I’m not worried about that and there’s more to everything to be a bad boy. I think it’s a complicated character and I don’t think of Eric as evil. You can label good or evil. Usually from my point of view that’s boring. I don’t think you can be just dark and vampires are more complicated that that.

B/Skarsgardfans: Character is like an onion with many layers- (Alan Ball analogy)

Alex:When you work on a television show we’ve shot , we’re wrapping ups season 3 right now. We’re shooting after 11 and 12 midnight sometimes. There got to be more there’s got to be like more to the character (like an onion and layers) for you as an actor and it won’t be any  fun for the audience. It’ll be like (the character) is one dimensional, in the same note the whole time. There’s got to be more.

B/Skarsgardfans: Are you still set to start filming Melancholia this July?

B/Skarsgardfans: Ok time is almost up-World cup soccer this weekend-USA versus England. I’m rooting for Spain to win the cup! I know you support Hammarby, Bajen-

Alex: yah we’re not it this year!  Good luck to USA. Thanks again!