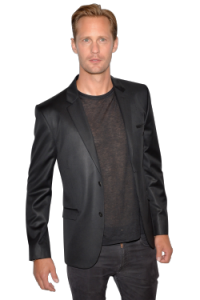 Alexander Skarsgård on The Giver, True Blood, and the Sack of Destiny

As the oldest of eight siblings, Alexander Skarsgård has always had a way with kids, which may have helped him on the set of The Giver, that arrived in theaters this weekend. Playing a character known as Father, he’s responsible for taking care of genetically engineered babies before they are placed into their assigned family units. Of course, if any of these infants fail to thrive right away, Father gives them “release” — something Eric Northman, the vampire Skarsgård has portrayed on True Blood for seven seasons (and who refers to children as teacup human) , would call the True Death. While Father doesn’t recognize the concept of death, Eric has confronted it many times over  — but it’s not the prospect of his own death that troubles him anymore, now that he has been cured of Hep-V. With Bill (Stephen Moyer) refusing to take the cure himself, effectively deciding to commit suicide, Sookie has grown increasingly distraught, and Eric does not like his love interest to be distraught. Skarsgård, who has spent the last two months shooting Tarzan, called Vulture up from London to chat about dispensing death, his racy scenes on True Blood, and what he’s going to do next.

So, you’re shooting Tarzan, True Blood is ending, and The Giver hits theaters, all at once.
Yeah. [Laughs] That’s why, unfortunately, I couldn’t make it to the premiere in New York a couple of days ago. I really tried to make it over there. It would have been so much fun, but we’re shooting nonstop here, so the schedule is pretty hectic. I’m stuck in the jungle.

For True Blood, did you not like to wear your equivalent of a loincloth? Your modesty pouch, your cock sock, your sack of destiny, or whatever you liked to call it.
Sack of destiny! [Chuckles]

Stephen Moyer was saying for that iconic full-frontal shot at the end of the last season, where Eric starts burning in the snow, you actually chose not to wear your sack of destiny. That it wasn’t scripted that way.
Ah … I wear it sometimes. Obviously, if it’s a love scene with an actress, I’ll wear it, absolutely. But that scene was just me on a rooftop in Hollywood — that’s where we shot it, with a green screen. And it was a very hot day, so I didn’t need the sock. It was supposed to be, when the scene was written, Bucky [Brian Buckner], the showrunner, and I talked about potentially trying to go back to Sweden, to shoot it there. We were very excited about it, and then we realized that it might, you know, be a little bit expensive [laughs] to fly the crew over to Sweden just for that one short scene. Then we were going to shoot it in the Rocky Mountains instead, and then that didn’t happen, for many different reasons, so then we ended up shooting it on the parking structure on the lot where we shoot the show in downtown Hollywood. And it was in June, so it was like 100 degrees. Yeah. Not quite like the mountains of northern Sweden!

But what’s so great about being alive is that you can make plans, and then just change them! And they’re in a society where you can’t. All your plans are made for you, by someone else. And he doesn’t know. He doesn’t know the concept of history. He doesn’t know what happened before “Sameness.” That’s why that comes as such a revelation for Jonas, when he feels what war is, and pain and suffering, but also love and beauty and the sunset and music. And for him to realize that, as painful as life is, it’s worth living. And because Eric kind of enjoys life and tries to milk everything out of every single second, so I think he would just feel sorry for Father, and he’d probably do his best to help him come out of his shell and teach him a thing or two. Eric’s been around for 1,000 years, so he’s seen a lot. If that didn’t work, he’d probably just drain him. [Laughs]

You told me before that you wanted to move to New York after True Blood was done. Is that still the plan?
Yeah! I’m actually looking at apartments in New York now. I’m in London for another three months for Tarzan, and then my plan is definitely to move to New York. I’m really excited about it. I don’t really have any plans in terms of what I want to do — movies, television, theater — but I’d love to do a play in New York. Anything that would be a break from what I’ve been doing, something different. I mean, my dad did Mamma Mia, just after he had done a couple of dark indie films, and he had a really good time doing that. He loved it. He was like, “Fuck it! This is fun. This is different. There’s nothing wrong with fun. I’ll do it!” You know? It’s all about trying to find those projects where you get to enjoy yourself, because I think that’s when you create as well, when you’re genuinely excited about something. Then you’re not just doing it because it’s your job. After seven years on the show, where every break before was a hiatus from the show, there’s something quite exciting about not knowing what I’m going to do next. It’s a feeling I haven’t had in seven years, and I’m pretty excited about it.

I think people were rooting for one last Eric and Sookie love scene, but they got one with Eric and Jason instead.
[Laughs.] We just aim to please! We thought that’s what people wanted, so we gave it to them. That was incredibly difficult to shoot, because Ryan [Kwanten] is so funny. He’s hilarious. So trying to do that scene and trying to keep a straight face was really tough for me that day. But I love working with him.

Director Howard Deutch said his only direction was for you to take it as far as you wanted to.
Yeah, and we took it pretty far. [Chuckles] That scene obviously wasn’t written when we shot the scene last season where I give him my blood, and they didn’t really have a plan to go anywhere with that. But when we shot it, and the way Ryan reacted to it, it was suddenly, when we shot it, it became more sensual than we thought it would be. And when they yelled, “Cut!” everyone was like, “Oh, we’ve got to see more of this.” [Laughs]