Supersized Block Party to Take Place Saturday, July 22 on the Field at Petco Park in the Gaslamp

Look out San Diego, truTV’s Impractical Jokers are coming back to the Gaslamp District – and this time they are going to leave it all out on the field. truTV, along with Sal, Joe, Murr and Q – together known as The Tenderloins – will treat fans of the long-running series to a massive block party steps from the San Diego Convention Center on the Field at Petco Park on Saturday, July 22. Building off last year’s mammoth block party which drew over 12,000 Jokers fanatics for a day of fun in the sun, truTV promises an even bigger, better Jokers experience this year.

Saturday, July 22 on the Field at Petco Park (7th Ave and L street)

The Official Schedule of Disorganized Hijinks and General Mayhem

11:30 a.m. – 8:30 p.m. PT: Join truTV and thousands of fans at the one-of-a-kind Block Party extravaganza celebrating all things Impractical Jokers. On top of exclusive merchandise from Spencer’s – including a new line of 3¾-inch Impractical Jokers action figures – a White Castle food truck, Wheel of Doom tattoos and a set from DJ G Money, this massive block party will give fans a chance to get up close and personal with some of the show’s most exciting and iconic dares and punishments. Things like:

Virtual Reality High Wire Experience: Sponsored by Mountain Dew, fans can get a first-hand VR-experience walking the same tightrope the Jokers crossed during their 100th Episode Live Spectacular (Season 4; Episode 26);
Pseudo Sumo: Fans can step into the ring for some sumo wrestling action, but don’t worry – they won’t have to don a diaper like Joe (Season 4; Episode 11);
Rodeo Clown: Fans can try their hand at riding a mechanical bull – and see if they can outlast Murr in this season three episode. (Season 3; Episode 9).

7:00-7:45 p.m. PT: A live presentation of Impractically Speaking: the Impractical Jokers Live Web Show, hosted by Casey Jost and brought to fans in the stadium and at home by Mountain Dew.

8:00-8:30 p.m. PT: An exclusive viewing of a never-before-seen episode of Impractical Jokers.

All activities are free and open to the public on a first come, first served basis. 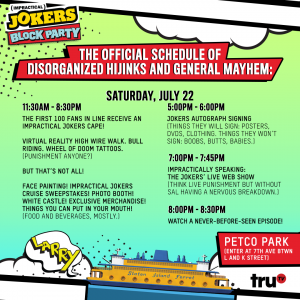