It’s just as well, given Diary’s proliferation of intimate sequences between the 38-year-old Skarsgard and Powley. Based on the 2002 graphic novel by Phoebe Gloeckner, it’s a frank and funny coming-of-age tale set in San Francisco in the Seventies. Powley’s 15-year-old Minnie loses her virginity to Skarsgard’s shambling Monroe, the 35 year-old boyfriend to her mother Charlotte (Kristen Wiig). It’s Minnie who does the seducing, sucking his finger in a bar, before embarking on a lusty affair.

While Minnie is very much the instigator, was Skarsgard concerned at the controversy his character’s affair with an under-age girl might stir? “To me that was what got me excited about it,” he enthuses. “Doing it in a way without justifying or condoning what he does. He’s obviously 35 and she’s a teenager and he’s responsible for what happens. But the challenge that I thought would be interesting was: ‘How do you make him real?’ It wouldn’t be interesting if it was him preying on her for an hour and 40 minutes.”

Monroe is no one-dimensional predator; Skarsgard talks about looking for the “real” aspects of him, where he’s weak, confused or like a lost teenager. “I thought it would be more interesting for the audience if you are confused and not sure how you’re supposed to feel about this whole situation. It’s great if there are moments when he actually understands what he’s doing, or there are moments when you think he’s charming, and you get why she’s attracted to him.”

Skarsgard’s own upbringing was almost as bohemian as Minnie’s. The eldest of six, his family lived in an apartment block, close to his grandparents and cousins; every night, there’d be boozy dinners – “a lot of wild hippies and artists and anarchists”. In the day, he’d hang around Stockholm theatres where his father performed. When he was seven, a family friend gave him his first film role. Six years later, he scored the lead in Swedish TV programme Hunden som log (The Dog  That Smiled).

“I wouldn’t say I was famous, but some people recognised me,” he recalls. “And being 13 is fucking weird for anyone! But then it gets [even weirder] if someone recognises you. I got really paranoid and uncomfortable with the attention – I was like: ‘This is what it’s like, I don’t want to do it anymore.’” He quit acting as a result. “As a teenager, I was very against it,” he remembers. At 19, he did a year of national service in the Swedish army, joining a unit that dealt with anti-terrorism and anti-sabotage in the Stockholm archipelago.

Completing his service in 1996, he headed to England, studying English at Leeds Metropolitan University for six months. But he began to think about the profession he’d left. “I missed acting, I missed being on stage, being in front of a camera. I felt like: ‘I’m not 13 anymore. I’m in my twenties – maybe I can deal with it now if it happens again.’” Moving to New York, he studied theatre for six months, then returned to Stockholm, where he began to score acting jobs on stage and screen.

Holidaying back in the States, Skarsgard landed his first American role – the super-dim male-model Meekus in Ben Stiller’s 2001 cult comedy Zoolander (sadly, the character died in a gasoline fight, meaning he won’t be returning for the upcoming sequel). He followed it playing a real-life US marine in Generation Kill, the Iraq War-set HBO mini-series from the creators of The Wire.

From there, he jumped on board True Blood, cementing his pin-up status with one of the raunchiest roles on TV. “Everything changed when True Blood came out,” Skarsgard nods. “The fact that people care and they approach you; you feel they’re affected by it and it meant something to them. That’s a compliment,” he says. “It shouldn’t make you paranoid.”

After seven seasons, the show ended in 2014. “There are moments when I miss playing Eric Northman,” he nods. But on the flip side, he’s relishing the freedom he now has. “I could take a year off if I want. Or if something comes up that I want to do in the Kalahari desert, I control my own schedule.” To date, the films he has made were often shoehorned into the hiatus between True Blood seasons. Some, like the modern take on What Maisie Knew, were decent; others, like the Straw Dogs remake, are best left forgotten.

Now, though, Skarsgard is about to show Hollywood he’s ready for leading-man status. Since completing Diary, he has spent eight months working on Tarzan, a new blockbuster take on the famous jungle tale by Harry Potter director David Yates. Margot Robbie of Wolf of Wall Street plays Jane.“It was very exhausting. It was really intense. But a phenomenal experience. I was so intrigued by that character,” he says. “I didn’t know what it would be like when you do a big movie like that. Are they going to micromanage you? Are they going to be nervous if you want to change one word?”

Skarsgard has worked with his father on screen before. In Lars von Trier’s Melancholia, he played Michael, newlywed husband to Kirsten Dunst’s depressive Justine. Skarsgard Snr. featured as Justine’s boss. “It was just a couple of days – we didn’t have that much stuff together. But it was such a dream.” He’s keen for a re-match. “For so many reasons, obviously. He’s my Dad, I love him. I think he’s a fantastic actor.”

In between dates in New York’s Botanical Garden with Alexa Chung, he has just wrapped War On Everyone, the new “dark comedy” from The Guard’s John Michael McDonagh. “I haven’t done comedy since Zoolander,” he smiles. After True Blood, teenage girls and Tarzan, he’s probably in need of a laugh. 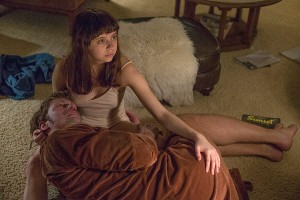