How did you get involved with the project?
MH: I read the graphic novel “Diary of a Teenage Girl” eight years ago. And then I just stalked and furiously hounded the author until I got the rights — first to make it into a theatrical play and then into a movie. So it’s just been my blind passion and stubbornness that has made it into this project.

And how did you find your Minnie?

MH: Casting Minnie was the most important casting decision you could possibly make. It feels weird to say that Bel submitted a tape because nobody gets cast off of tapes.

Bel Powley (BP): I’ve been doing tapes for like three years. I’ve probably done about 500 tapes and it’s never gotten me a role.

MH: The moment I saw her [Powley], I just fell in love with her. And then of course, when I got the two of these guys [Powley and Skarsgard] into the room together, that was the moment that it was really clear that it was perfect chemistry-wise.

Were you nervous about appearing in sex scenes with someone portraying a teenager? Did you have any hesitations about that?

Alexander Skarsgard (AS): No, I felt that those scenes were crucial. It was important to have those. I trusted Mari. I knew they were essential and that it would be done in the right way. So I didn’t have any doubts. I thought it was unique. It was a story I haven’t seen or read before and also I thought it was very important to tell the story from a girl’s point of view. I thought it was very brave and the fact that it’s a young girl who talks about sex and other things than just “oh, I want to get married and have kids.” Believe it or not, I’ve never been a 15-year-old girl, but I can imagine it being tough for young girls. It’s always okay for guys that age to talk about sex and to have sex, but when it comes to girls on the big screen, it’s not about sex, it’s about love and finding Mr. Right. It was really refreshing to read something to have that from a young girl’s point of view.

Were you nervous about being naked on camera in such intimate moments?

BP: Yeah, of course, I was definitely really nervous at first. Weirdly, when I read the script, the sex scenes and the nudity didn’t pop out at me. I didn’t think “oh my God, there’s so much sex and nudity!” because the story is just so strong. Those scenes are so important for the story.

How much rehearsal did you have before you started shooting?

MH: Thankfully, we got two have some really wonderful rehearsal time between these two [Powley and Skarsgard] which was really helpful because we had to really hit the ground running with this schedule and they had to have such amazing chemistry going on. All of their sex scenes and love scenes and big fights was shot in the first week of filming so we really did hit the ground running.

What was the most challenging aspect about playing the role of Monroe?

AS: Carving out this relationship and trying to find that balance so he’s not just a predator. That wouldn’t have been interesting for an hour and a half. When I read the script, that was the challenge I was excited about, to find that. We had a week or two in San Francisco before we started with the three of us finding that, to make it real and make it interesting and make Monroe more than just a predator, to make him vulnerable as well.

AS: I felt that. I felt that Minnie and Monroe were the same age. Then there were other moments where he was much older than she was. That’s what makes it interesting.

Were you concerned at all about Bel nailing Minnie’s American accent?

MH: When I watched her tape, I didn’t realize she was British until at the end, she put a little personal note to me where she went into her normal way of talking. But I did ride her a little bit on the accent thing because it is such a pet peeve of mine. I hate watching someone do an American accent poorly.There were just a few moments late at night when we were going for a long time. I totally understand how that works because I’m an actress too. In your brain, you get stuck on a way of saying something or you can’t hear something and your ears start to shut down a bit. We would be going over one word over and over again, often the word “San Francisco.” I feel kind of bad. I rode her quite a bit.
BP: I’m glad you did. It was worth it.

What was the biggest challenge in bringing “Diary” to screen?

MH: The biggest challenge for me was taking this book which I adored and revered in so many ways and having to get rid of my reverence for it in order to be able to make it into something new and make it my own — and separate my love for Phoebe [Gloeckner] and for the book that she created and let it become something new. That was a challenge. It was like I had to really consciously make that shift at some point.

My first few drafts were too faithful. I was too faithful to the book and it didn’t work. Books and movies are different and they have to follow a different narrative and they need to go into different places and to exist in a different emotional space. That was a big challenge because I obviously loved and adored  Phoebe’s work so much but at some point, that’s the only way you can adapt something is to cut that cord at some moment. Nobody was telling me how you should adapt a book. I was just figuring it out along the way.

It is such a sensitive film. Was it a concern that some people might be offended?

BP: I want people to watch it and after watching it, maybe think that female sexuality should be less of a sensitive subject.

AS: I just want people to watch it! 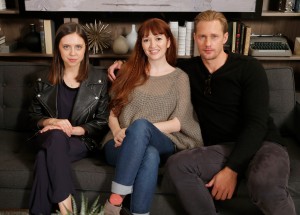