We were all pretty busy last weekend trying to keep up with all the gorgeous new photographs of Alexander Skarsgard coming out of his promotional trip to Sundance, but in the midst of all the  madness, his movie “Diary of a Teenage Girl” became a big festival hit with the critics and audiences alike.

Below are some of the highlights from some of the great reviews, each with a link below to click for the full feature.

Most impressively, however, Heller maintains the book’s seriocomic ambivalence — which makes sense when reading the bright yet very immature first-person meanderings of a 15-year-old mind circa 1976 on the page, but might easily have curdled into sensationalism or grotesquerie onscreen. Minnie probably doesn’t know what the word “pederasty” is, and doesn’t think of herself as a victim. But at the same time, she’s very badly served by her lack of responsible adult role models — Mom, Monroe and their friends seem to be living improvisational lives that any children must just fit into as best they can.

Faithful to the book’s vision (if more physically attractive), Skarsgard makes Monroe so easygoing and likable you sometimes forget that his passivity is actually a contemptible willingness to let his libido make decisions by default — for which he then blames “manipulative” Minnie.

Having staged and performed the work beforehand was necessarily of enormous benefit in terms of Heller’s focus on how to transform the material for different media. Her self-assurance behind the camera is evident in every scene, as it is in her presentation of Minnie through Powley, a British actress obviously without inhibitions, who is entirely winning in her first film to hit the big screen.

His obvious good looks largely unremarked upon here, Skarsgard has a tricky role that could easily have been portrayed as a scummy, loathsome predator. Instead, his Monroe is a laid-back guy of no detectable ambition who just generally goes with the flow.

But it’s Minnie’s story that is captivating, made even better by a naked performance, literally and figuratively, by Powley. Is it her ill-advised (and possibly abusive) first sexual experience that forms her, is it her mother who fancies herself a feminist but competes with women for men’s attention, is it the drugs, is it her sexually-progressive friend Kimmie (Madeleine Waters), is it the 70s, is it underground comics, is it San Francisco, is it just hormones? No, it’s all of those things. And this is the rare movie that realises that individuals are the sum of formative experiences – some good, some bad, and some productive in their devastation.

On the Park City shuttle buses, this film quickly earned a reputation as the “sleeping with Alexander Skarsgard” movie. Accurate, yes: There are plentiful scenes of the actor wearing little other than his charismatic smile. But that quip belies the engaging new creative voice Heller offers. Diary beautifully evokes the childlike hedonism of the Castro in 1976 San Francisco with muted, soft focus and delights in its offhand humanity. As ill advised as Minnie’s adventures are, Heller avoids scorn, instead inviting the audience into a sweet chaos, ready to implode at any minute. Believe me, “sleeping with Alexander Skarsgard” doesn’t rank high on my bucket list, but in Heller’s hands even I feel the butterflies that flutter in Minnie’s stomach as she exuberantly falls down the rabbit hole of her own naiveté. Even better, the sexual tryst doesn’t overwhelm the characters’ dynamics; instead it provides a dramatic spine on which to hang Heller’s insights and observations.

THE DIARY OF A TEENAGE GIRL is a messy, uncompromising look at the warts-and-all sexual awakening of 15-year old Minnie Goetz in 1976 San Francisco. Bel Powley is about to blow up following this film’s release, and with good reason: she’s incredibly believable as Goetz, full of needy lust – sexual, chemical, creative, and otherwise – personified. Kristen Wiig (as Minnie’s freewheeling, jealous mother) and Alexander Skarsgard (as her mother’s boyfriend and Minnie’s consistent lover) deliver strong supporting turns, especially Skarsgard who conveys the overwhelming desperation of a hunky dude moving towards middle-age who’s fallen pathetically in love with a fifteen-year old.

We know our sex-obsessed 15-year-old heroine Minnie Goetze (22-year-old Brit breakout Bel Powley) should not be losing her virginity and sleeping with the hunky goofball of a boyfriend (Alexander Skarsgård) of her 30-something single mom (Kristin Wiig) and that there will be tears before bedtime. But we see how it happens: their flirting, fondling and coupling is fun and celebrates the joy of sex, without avoiding the pain that inevitably comes with it. Part of Minnie’s charm is that she doesn’t know what she’s doing–she’s learning as she goes along. Finally, the movie empowers Minnie. She’s no victim. She owns her budding young body and her sexuality. There’s a marvellous moment when her mother’s boyfriend glimpses the hickey on her neck that he did not put there.

“I’m prepared for people to be up and arms,” says Heller. “But I think there’s some real emotional feelings between the two of them, and I think Monroe (played by Alexander Skarsgard) is, emotionally speaking, 15-years-old. I do think he’s irresponsible, but I view it as a super-complicated relationship that lives in the grey zone. Ultimately, it helps Minnie get in touch with her sexuality, which is a good thing. It also helps her find her own self-worth — which is a really good thing.”

Powley adds: “We’re not trying to promote 35-year-old men having sex with 15-year-old girls, but I think we wanted to do the movie and play the characters without judging them. We didn’t want to portray Monroe as a predator, because that’s not what he is. And Minnie was at a point in her life where she could’ve fallen in love with whoever she lost her virginity to, as a lot of young girls do.”

Rolling Stone – Sex, drugs and “Diary of a teenage girl”

The film received sustained applause after the screening ended, and many in the audience were curious how Heller found her perfectly-cast leading lady. “Bel submitted an audition tape from England and did her whole audition with an American accent and I didn’t realize she was British until the end when she delivered a personal message to me,” Heller said.

Powley said the whole experience was incredible and she was overwhelmed by the response. “I read the script and I’d never read anything like it,” she shared. “It was something I related to in so many ways. I thought I have to be in this.”

Skarsgård, who achieves a small miracle here by making his character extremely likable and surprisingly uncreepy, explained how he developed such chemistry with his young co-star. “We had three weeks in San Francisco before Kristen joined us so we rehearsed,” he revealed. “We shot our scenes first and I think they went pretty good because when Kristin got there we had a secret.”

Based on Phoebe Gloeckner’s novel, the film charts Minnie’s journey from shy teen to unapologetic hedonist, and the actress’s very physical presence seems to transform. Her wide eyes go from tense to questioning to hungry; her collapsed posture starts to betray real confidence, even drive. She grows up before our eyes.

Meanwhile, she and Skarsgård have naked, naked sex all over the place. The movie lets us laugh at it, even though we know it’s totally wrong. It even lets us — gasp — accept it on some level. (It probably also helps that the year is 1976.) “Is this what it feels like to have somebody love you?” Minnie thinks, sitting in the bath, post-coitus, wide-eyed with amazement. “Somebody wants me.” She still can’t believe it. Her awe is sweet, but also a little heartbreaking. It speaks to that moment — universal, on some level — when the shivers of pleasure and human connection start to overcome our shame of adolescence. 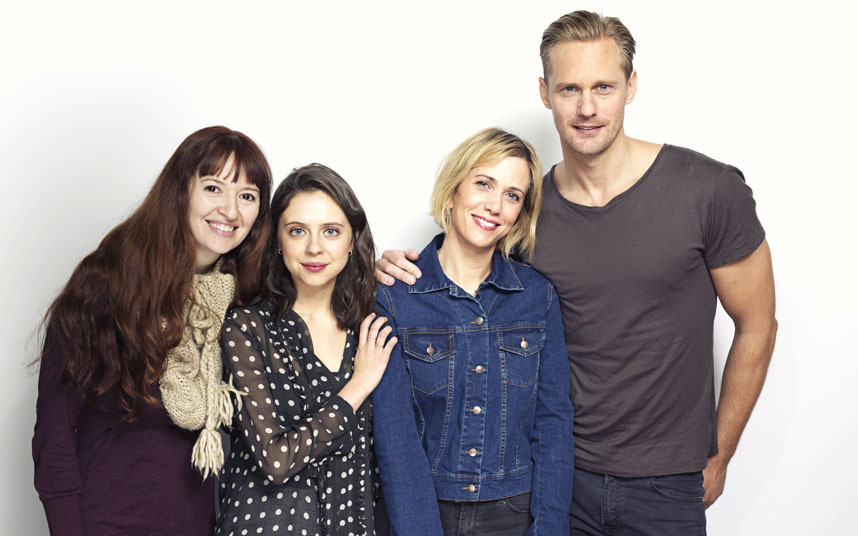