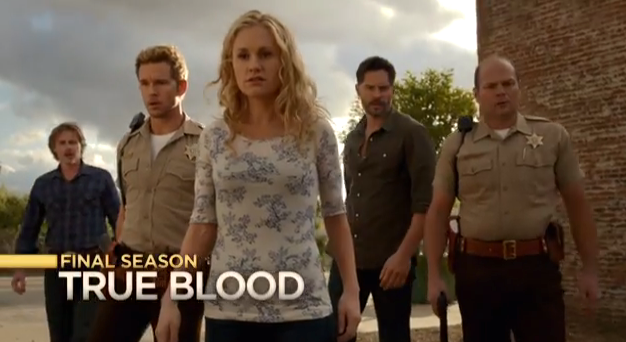 The final season of True Blood will be here very soon. Season 7 will premiere on June 22, 2014. TV Guide’s Kate Hahn was on set during filming for season 7 and interviewed Brian Buckner. Excerpt of the interview is below :

In the final season, we’re telling a more personal story,” says executive producer Brian Buckner, who took over after show creator Alan Ball and executive producer Mark Hudisleft. “We’re going back to the original promise of the show: Bill and Sookie. People are going to be very surprised about the way we get there. There’s romance, sadness and resolution.”

There’s also Hep-V. The deadly virus is spreading, and hordes of starving, zombielike vamps are staggering toward Bon Temps. “Fans can expect a bloody barbecue with consequences in the season premiere,” teases Buckner. “Nobody’s safe.”

The sudden spike in the local mortality rate leaves the survivors fighting to save their town. “The stakes are the highest they’ve ever been,” says Paquin, who’s married to Moyer. “Sookie gets into situations she’s going to need help getting out of.”

In the Season 6 finale, it looked as though she would never again see Bill as a savior. He and shape-shifting Bon Temps mayor Sam Merlotte (Sam Trammell) devised a plan to pair up uninfected vamps with healthy humans in a symbiotic relationship for survival. But when Bill offered to be Sookie’s plus-one, she opted out and fell back into the arms of reliable, rock-solid werewolf Alcide Herveaux (Joe Manganiello).

“No matter where Sookie was, Alcide came running. That’s just the kind of guy he is,” Manganiello says. “He’s a good, solid choice. But nobody stays happy for long in Bon Temps.” Despite all the danger, there’s no shortage of hot sex scenes this season. “There’s a profound lack of clothing,” says Buckner.

For more on True Blood, pick up this week’s Summer Preview issue of TV Guide Magazine, on newsstands Thursday, May 29! SOURCE:

UPDATE: Here is the cover art for the issue (wow imagine my surprise when I spotted the soul mate pair on the cover said with much sarcasm…) 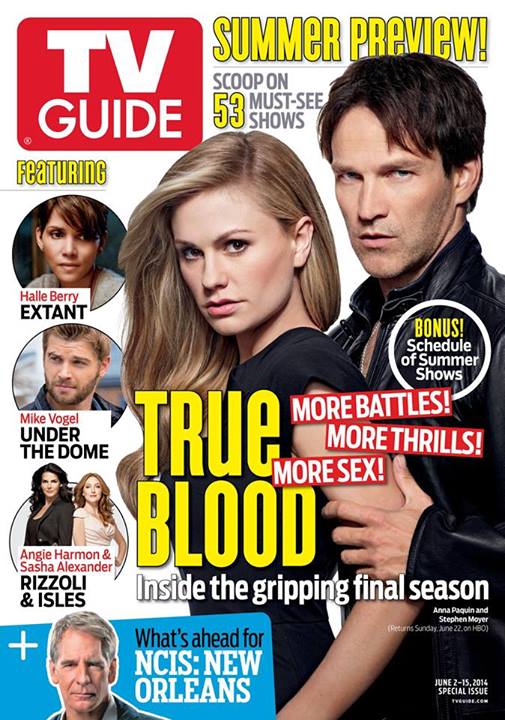 Sad to see how they seem to be heading but this has been coming for a long time. The season 6 finale hinted at some of the  ‘redemption’ of Bill and forgiveness for all his past ‘sins’. Sookie seemed to jump into Alcide’s arms a bit too quickly and will probably be out of love with him after a few episodes. Just hope Eric and Pam get an amazing storyline and yes a fitting ending for their characters. Too many seasons of what could have been! (all speculations) Yes I am sad to see the growth that characters have had over the seasons just tossed down the toilet for this “back to the beginning” stuff.

So what do you think of Mr. Buckner’s comments? Are you ready to say good bye to True Blood?

Here are the page scans: (note the BIG SPOILERS!!)