Tonight HBO will air the fifth episode of the sixth season for True Blood. This episode is titled “F#ck the Pain Away”. Wetpaint has posted some interesting spoilers for the episode. Read at your own risk!!

True Blood Season 6 has been a whirlwind of vampires and faeries (both old and new), and this Sunday, Episode 5: “F*** the Pain Away” brings characters  together in shocking new ways.

No, we’re not only talking about Warlow’s hybrid faerie-vampire life — there is much more than meets the eye, and Truebies, you might want to sit down for these spoilers. Wetpaint Entertainment got a sneak peek at the upcoming episode, and after the crazy hour, nothing will be the same.

Read on for 5 things to know about the dramatic ep, then hit the comments with your thoughts and theories about the teases.

Read spoilers at your own risk! For more on Wetpaint Entertainment’s philosophy on spoilers, click here.

1. After Benlow proclaims his love for Sookie, someone from her past walks in and physically takes control of the situation — and you won’t see it coming.

2. A shocking almost-hook-up changes a relationship forever, and later, one half of the duo in question walks in on the aftermath of her former love’s tryst. Awkward alert!

3. More than one huge reveal about a character made us gasp out loud, and said intel may cost someone his or her life.

4. Forget everything you know about at least one person’s death — everything changes with one flashback. This new information also leaves someone’s life hanging in the balance.

5. Prepare for a Gladiator-meets-Hunger Games style battle between two people that no one wants to see die.

Here are some of my thoughts on the above ‘spoilers'” 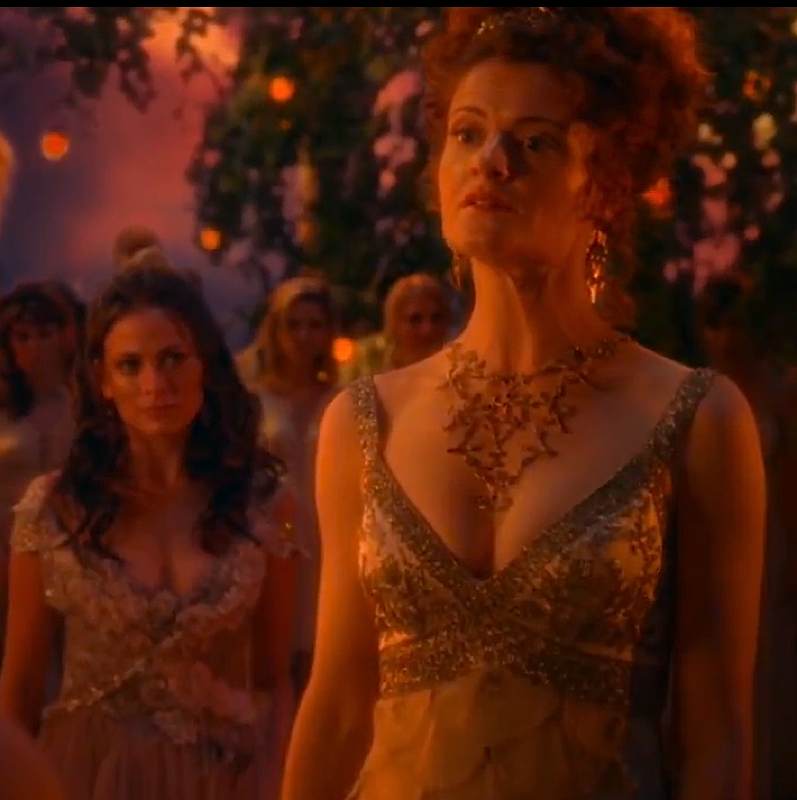 1- The someone from her past could be so many people. One that comes to mind was perhaps Sarah Newlin? 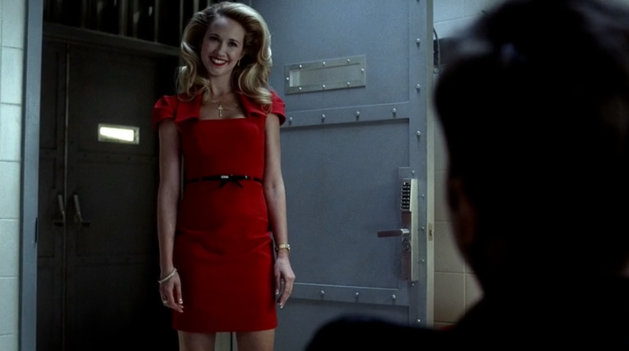 She could be trying to get to Sookie in order to find out more about Eric Northman (we did see Steve Newlin at the Camp being asked about Eric.) Another option I can see would be fairy queen Mab. Perhaps Ben was of the royal family line and maybe he was Mab’s son (She did hate vampires). Also have a feeling that Sarah was getting ready to tell the Governor that she was pregnant.

Whoever it is that stops Benlow in his tracks has to be powerful enough to do so.

2- The shocking hook up- well we have seen quite a few odd hook ups in the past so this one has a few possibilities. Vampire Jessica was left quite aroused after ingesting the teen halfling fairy blood. Could she almost hook up with Jason (again..not too shocking). Maybe Jason and Sarah Newlin have a hook up. (could it be shocking for Jason if Sarah were pregnant by the Governor?)  I could see Jessica walking in on Jason and Sarah’s aftermath.  I have even read a few speculations saying perhaps Billith and Jessica almost hook up (they are maker and child but have never done so). 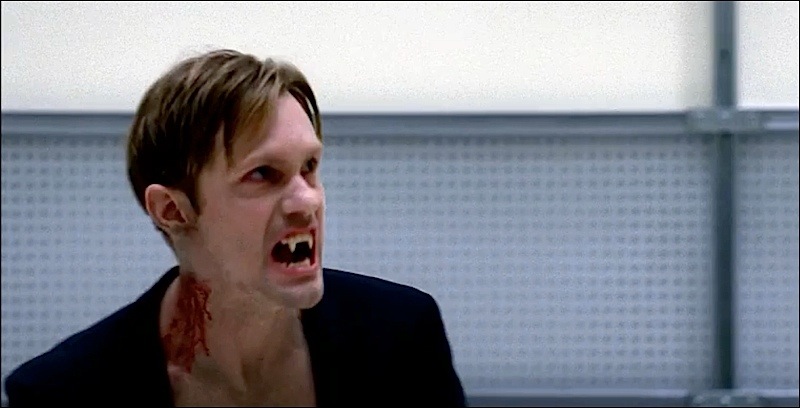 3-Could the huge reveal have something to do with Pam revealing something about Eric while she is a prisoner at Vamp Camp? We do see Eric and Pam in the trailer coming out of the elevator at what looks like Vamp camp. If this is the case- number 5- could be a fight off between Eric and Pam (looks like Pam is holding a stake) Screencap- 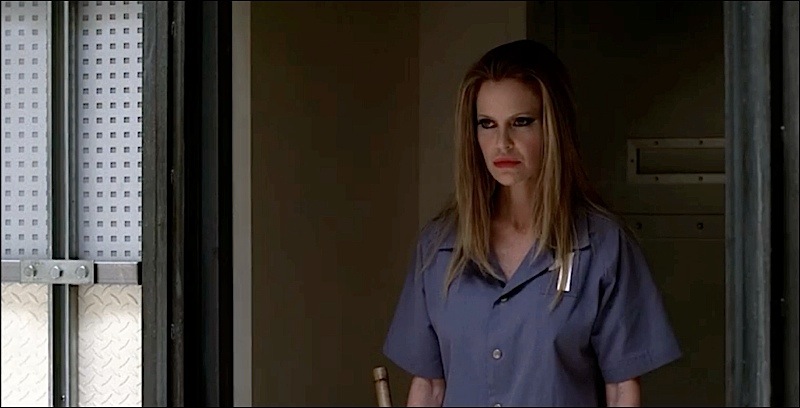 UPDATE:  we saw some of the action related to a ‘fighting’ scene in the Weeks Ahead Promo trailer. Here is the cap for that scene: Looks more like Eric may fight Willa! Not sure but this would be a bad twist. 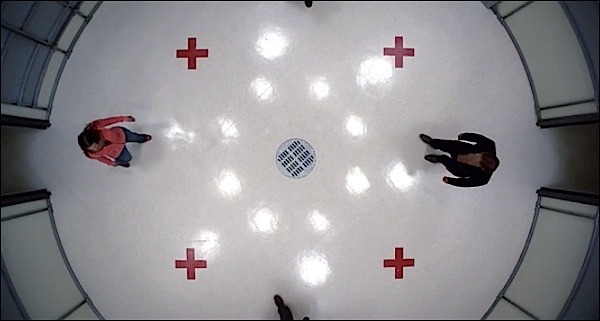 4- The death flashback scene could be related to the death of Sookie’s parents. The fairies re-enacted the scene on the bridge but Sookie did not see the actual way her parents died. Maybe it was not at Warlow’s hands? Could the fairies have had something to do with it? We do see Lafayette holding a seance to summon her parents. 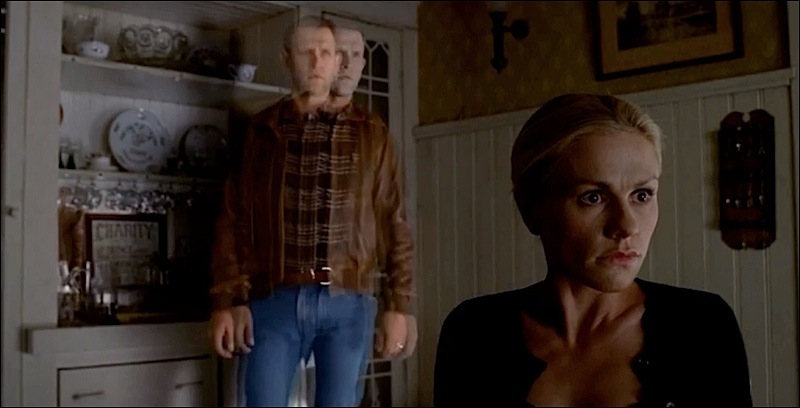 Maybe Benlow says he did not kill them (who knows…)

Waiting sucks but at least the new episode airs in a few hours. Let me know what you think some of the spoilers might mean.

The caps below are from the Weeks Ahead trailer showing some of the action we have not yet seen on the show this season: