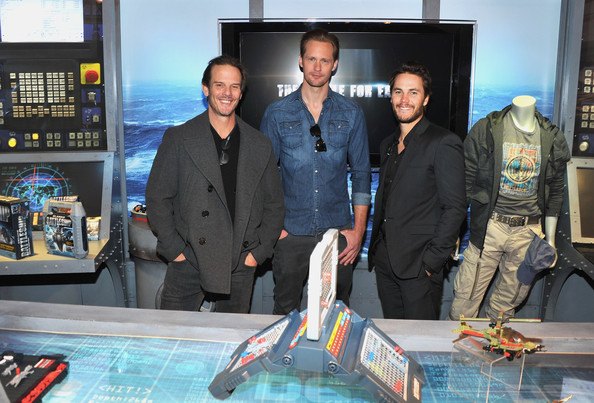 Nextmovie.com talked with Peter Berg and Alexander Skarsgard and a possible sequel to Battleship. videos below click on READ MORE:

[box] After discussing how the “True Blood” star and “Friday Night Lights” director got involved in a movie based on a board game (Berg approached the studio about his love of the Navy and wanting to do an event movie and Skarsgard was in the Swedish Navy and wanted to work with Pete – see their full answer in the video below), we asked the thing on everyone’s mind: Who would win in an epic battle, the aliens from “Battleship” or the vampires from “True Blood?”
Berg wanted to know the rules – could the vamps be armed? How strong is Eric Northman really? – while Skarsgard contemplated the possibilities. “If you put one of those guys in a big destroyer, he’ll beat the aliens, right?” Skarsgard offered.
“A vampire in a destroyer? That could be a cool sequel,” Berg suggested before having an epiphany about the similarities between the vamps and the extraterrestrials.
The ultimate answer? The guys decide the vamps and the aliens have much in common and are perhaps a match made in heaven. Romance blossoms. Ships remain afloat.[/box]
See their debate in the video above and hear about how they got involved in such an unlikely film in the clip below.
SOURCE: