Fandango posted some new images from Peter Berg’s film “Battleship”. The new one above shows Alexander Skarsgard in his role of Stone Hopper for Battleship.

Rihanna is standing on the deck of the U.S.S. Missouri in Oahu’s Pearl Harbor wearing fatigues and clucking like a chicken.

Yes, you read that right. Clucking. Like a chicken. “Bwawk, BWAWK!”

Certainly not what one might expect to see the pop superstar doing on the set of her first movie, one about a battle at sea with aliens to boot, but blame it on Battleship director Peter Berg’s style. This particular scene takes place at the beginning of the movie when Admiral Shane (Liam Neeson, absent today) is giving a speech on deck to some 500 extras. Rihanna, as tough-chick sailor Raikes, is egging on two male sailors to go mess with one of the ranking officers, Hopper (Taylor Kitsch), but they’re balking, afraid of him. He has her repeat the line “Go mess with him!” over and over. The sailors refuse again.

“Now cluck like a chicken!” Berg hollers at her. “Again!” He instructs the soldiers to bait her, and ad lib. He starts throwing them lines right and left. “What are you, Col. Sanders?” Rihanna starts to look mildly pissed, as her handlers watch, giggling, from the sidelines. Finally Berg gets the take he wants, and they break.

She stops to chat with the small group of reporters invited to spend the day on the set checking out advance footage and conducting interviews. Asks one: “Did you know you were going to cluck like a chicken when you came to set?”

“No! [Peter Berg] is crazy,” she says, but doesn’t seem to mind. “It makes it so fun, so spontaneous, nothing is memorized. It’s a real reaction every time. I couldn’t ask for a better director to work with on my first film. ” In her lilting accent, the Barbadian songstress turned actress goes on to describe how she became involved in the project—for someone already steeped in showbiz, she seems charmingly if incongruously wide-eyed about being here. 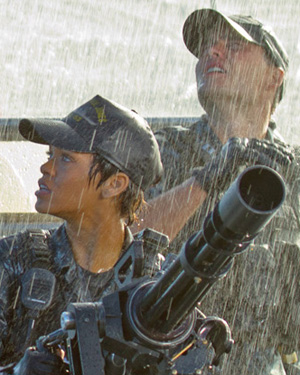 “It was weird how it happened; I walked into a meeting without my manager, which I don’t usually do. [Peter] just said hi, come in. I walked in and saw all these aliens and dolls and mockups. I was like, okayyyy….why are there pictures of aliens all over this room? I didn’t even know he was the director of this movie! It was a role I felt like I could handle for my first time acting and he was super enthusiastic about it.” Berg handpicked a real-life Gunner’s Mate to show Rihanna the ropes, from the lingo to the weapons–a woman he noticed for the punk rock T-shirt she wore as the only woman playing soccer on one of the Navy teams during RIMPAC (Rim of the Pacific Exercise) in 2010.

As Raikes, who works in the combat information center aboard the destroyer and gets to fire weapons like the boys, she’s pretty much your basic badass (and the fatigues don’t hide all of her real-life tattoos). Prepping for the role involved working out just like a sailor would in the Navy—runs around the ship, weightlifting, swimming—and taking orders. “One man drilled me, yelled at me, cursed me out, made me do pushups…my best friend was there and I told her, ‘I’m about to do acting class, you’re gonna want to kill this man but please, just stay in the other room.’ She would come in and just look around and be like, ‘Did he just say F.U. to her?’” She laughs. “It got you really in the mentality, that’s the stuff that they go through; it’s not a walk in the park.” Her reaction? “I wanted to say F. U. right back but he probably would have thrown me through the window! I was so scared, I just looked at him like, I swear I’ll get it right, I’ll be good!”

She didn’t mind at all being the lone female on the team. “This is how I grew up; most of my friends were guys. In this case I’m one of the guys. I’m not acknowledged as the female, no sympathy for me. She’s tougher than most guys on the ship; she walks with that swagger, gets that respect.” Don’t expect to see her wearing an evening gown for any love scene, either. “What evening gown? Even if she could she wouldn’t. She doesn’t like boys, doesn’t like girls. She’s just about her weapons and her work.”

As for the guys…Friday Night Lights star Taylor Kitsch cut his hair for the first time in 12 years to play loose cannon Alex Hopper,

brother of by-the-book Stone Hopper, played by True Blood‘s Alexander Skarsgard (pictured right, who has only been on set now for two days). “I was a wreck, to be honest,” Kitsch admits about the haircut. “But, it’s time. I’m not gonna have long hair all my career, right? It cost $4 plus tips at Supercuts, I thought it looked pretty tight, pretty good,” he jokes.

The two explain how their characters add an integral element to the story, a subplot that should make audiences care as much about the human relationships in the movie as they do the battle scenes. “[Stone] is older. He’s already in the Navy. He’s stayed out of his brother’s business, but it’s now kind of time,” says Skarsgard, whose white uniform clearly has more stripes than Kitsch’s.

Kitsch adds that younger brother Hopper is basically afraid of failure, and idolizes his clean-cut, perfect older brother to a fault where it’s holding him back and he’s not reaching his potential. “There’s literally a breaking point where it’s kind of, enough is enough. “

“That’s something my character was trying to avoid for years…’This is my path, you gotta find yours, you’re gonna make mistakes but hopefully you will learn something.’ But after a while it’s like, alright – enough. ‘Cause I see a lot of potential in the kid,” Skarsgard says.

As far as the movie’s scope, the actors who’ve mainly starred in TV shows thus far have found it a challenge they’re ready to embrace. “How is it different? We don’t shoot most of our [True Blood] stuff on the U.S.S. Missouri,” Skarsgard says laughing. “Day 1: I land, go out on this gigantic barge 10 minutes offshore with cranes, boats, jet skis, 5,000 people, floating basecamps…I come from a shoot in Europe for a Lars Von Trier movie where the catering crew here is bigger than that entire crew—crazy!”

SOURCE:
For the photo gallery and more information on this film please visit the Battleship page here:

One thought on “New Image of Alexander Skarsgard From Battleship”