Hopefully fans have recovered from their True Blood fangover to enjoy the new episode “Cold Grey Light of Dawn”. The new episode trailers are teasing fans as to what they might see including a new initiation for Alcide and Debbie and Jason offering Hoyt advice. (poor Hoyt). UPDATE: Boston Herald gave fans new SPOILERS LINK HERE: 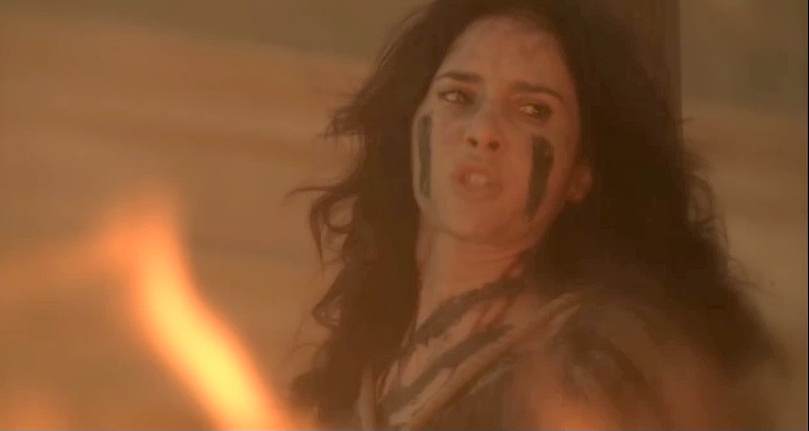 In the last episode we saw the powerful witch Antonia being burned at the stake. We also learned why she hates the vampires so much. It was at their fangs she was tortured, raped and sentenced to die. (the vampire priests were probably protected by the church). As she was burning, we could hear her cast out a chant in Latin.

Her fellow “witches” held prisoner in the church dungeon could also be heard joining in on the chant. The chant was a spell that cast out the sleeping vampires to walk into the daylight..

This is what I believe is being said in the chant:

Behold, I am gone to die from the stake of thy Christ.

A huge thanks to Mj from FB who found the translation (the closed captioning on her tv translated the chant):
“Hellspawn demon, creature of death. Fire shall take your very breath.”  this was repeated over and over.

As much sense as it can make but it sounds like her chant called out the vampire’s “magic/spirit” what makes them sleep during the day to leave (to escape) and to die. The vampires are seen waking into the daylight and burning up:

The priest in the front is Luis’ maker and the others are fellow vampire priests and nuns. They burn up in the daylight: 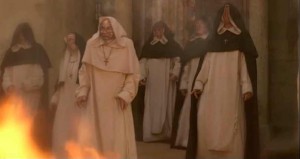 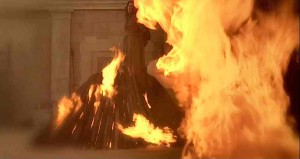 From the episode summary and also from the trailer for episode 4.07 “Cold Grey Light of Dawn” we know this

With Marnie empowered by spirits of the dead, Bill issues an unpopular order to save vampires from the light.

Since MarniA now knows the “spell” and is also a necromancer it makes sense that she will peform the incantation in another prayer circle. The preview trailer showed a vampire walking in the sun and yes burning up. Link here:  King Bill will have to issue an edict that the vampires will need to be chained in silver to keep them from walking into the daylight. This post showed various screencaps from the preview trailer showing Bill, Eric and Nan chained up.

Jessica is also at risk of walking into the sun and was shown in the trailer opening the door during daylight.

Either King Bill has her at his home to protect her or she is having issues with Hoyt.  It does seems that she will be cast out of Hoyt’s home perhaps (due to jealousy over Jason) and may not have had time to be “chained up”. Never fear it looks like Jason might try to save her since he is shown tackling one of King Bill’s guards. Waiting for the new episode still really sucks!