The upcoming episode of True Blood 4.6 “I Wish I Was the Moon” is set to be a fan favorite based on the preview trailers. It will be one that will keep fans on the edge of their seats. Eric Northman is shown being silvered by King Bill’s guards and perhaps faces a “true death” sentence. 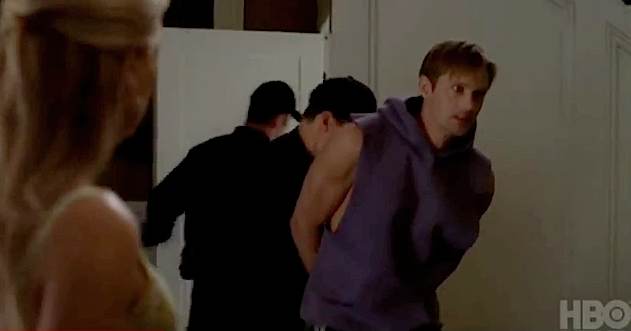 Never fear I have a “feeling” that the amnesiac Viking Vampire will not meet his true death on Sunday. However many fans may feel quite giddy and very faint at the sight of perhaps a continuation of Eric and Sookie’s kiss.

We were given a bit of a “sneek peek” of what looks like a very intimate moment between Eric and Sookie in the “rest of season” video trailer:

Never fear Eric fans even if King Bill manages to interupt this kiss shown above do not despair. I know it has been a bit frustrating this season but we have seen some glimmers of hope that Sookie will open her heart to the Viking.

Even if it “looks” like there will never be a chance of hearing Eric saying “my lover” to Sookie there may be a chance we will see a special moment for the two in the upcoming episode. No amount of muckery will bash my hopes as a fan of the show and yes of the character of Eric Northman and Sookie Stackhouse. Strong Sookie is starting to show a bit more this season and I can’t wait to see more of her.

Will we hear her say “gracious plenty”? Who knows. Doesn’t matter. What does matter is seeing how she is seeing the viking in a whole new light and yes she was the one who initated the “kiss” in episode 4.05.

No matter what happens no matter how many times King Bill does interrupt the pair, Eric will have made a definite impression on Miss Stackhouse’s heart. Even if the infamous words “my lover” from the books are never said we will always have this audio of Alexander Skarsgard saying those words in Swedish and English in the audio below:

During an interview Alex was asked to say those words. At the time of the interview (January 2009) his character on True Blood had not yet had a lot of airtime  so it was fun to hear the interviewers ask him to say the phrase. The words are on a loop so yes 39 seconds of hearing that phrase. Enjoy! Even if we don’t hear it on the show, you have it here.

One of the early tribute videos I did used this audio so here is that video: