The new episode for True Blood 4.05 “Me and the Devil” will soon air tonight. There were plenty of trailers for this episode which seems to be another action packed one. One of the images shown at the Comic Con panel has a lot of fans questioning whether or not it shows Eric post “amnesia”. SPOILER ALERT..Don’t read if you don’t want spoiling!!

This is the image:

It is made to look like Eric is scaring Sookie (and rightfully so since he is all fangy). Many are saying that he is post amnesia in this image. I’m not convinced. This shirt was shown in a set photo that showed Alex, Stephen and a fan who won the auction to have lunch with Alan Ball. Alan mentioned this event during the interview from Comic Con with Michael Ausiello (she was wearing True Blood earrings that was how I figured it out). Here is the post showing Alex wearing that flannel shirt 3/31/11

He is all bloody yes but I believe that is from having bitten someone else (shown in the video sneek peek for rest of season) the image is not clear but it appears to be the action for the  4.08 “Spellbound” or right after this episode  which called for :

As Bill and Marnie brace for a dangerous midnight face-off, Sookie and Eric pledge their allegiance to the King.

Eric is shown wearing a jacket and a lighter shirt in the Comic Con trailer: and they appear to be in the graveyard-a midnight meeting with Marnie: It almost looks like the Eric is biting down on someone perhaps a vampire shown earlier being controlled by Marnie (He is in the cell with Marnie and is kneels down before her).

I don’t believe that the spell has been broken yet. I have a big hint on when the spell is broken on these pages here:

EW magazine’s 7/1/11 issue showed the image below: This action seems to fit with the episode summary for : 4.10 “Episode #46 (#4.10): “Burning Down the House”: As all hell breaks loose in Shreveport, Sookie summons her most potent powers yet to save Bill, in the process breaking a spell and leading Marnie/Antonia to re-evaluate her mission Linked here: 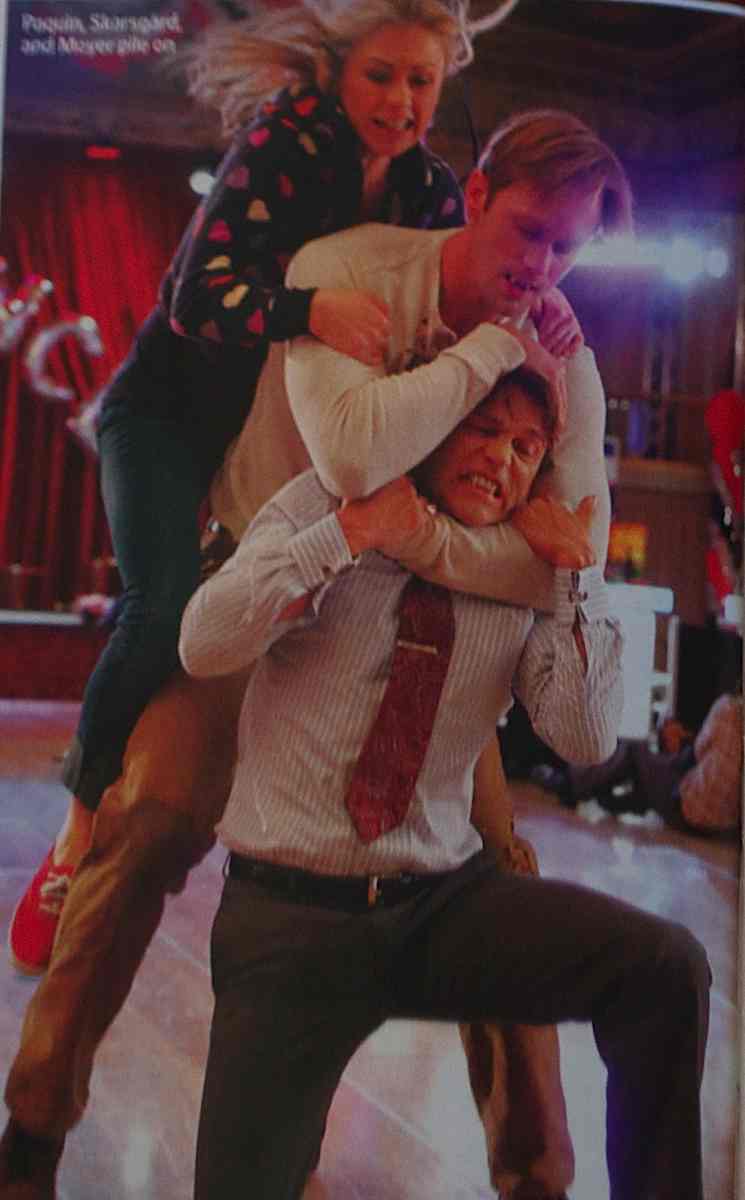 In those images Eric is shown wearing a different shirt not the flannel one. So I still believe that the spell is still happening in the image above but I could be wrong.

I am still not sure on the image below: (shows Tara pulling a gun on Eric) Sookie is wearing the same clothing above and it could be the same shirt for Eric.

Yes waiting sucks but we will soon have the new episode for this week!