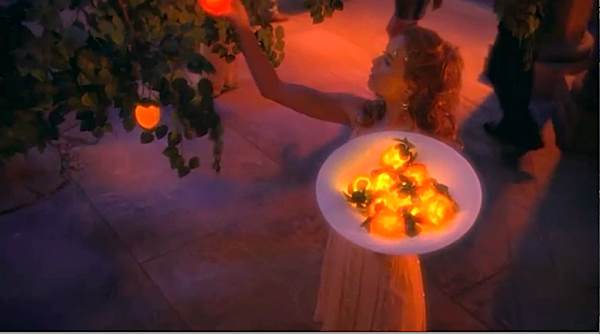 HBO GO gave fans a taste of True Blood’s season 4 today with a three minute sneek peek of the first episode. The little tidbit could have been called a little taste indeed! Some of the new footage was already shown in earlier promos but at least this time we got a little bit more than a hint of what the season premiere will show True Blood fans.

One of the Fae is shown picking the glowing fruit (look like apples) from a tree and placed in a bowl. Beware of any glowing fruit Sookie! 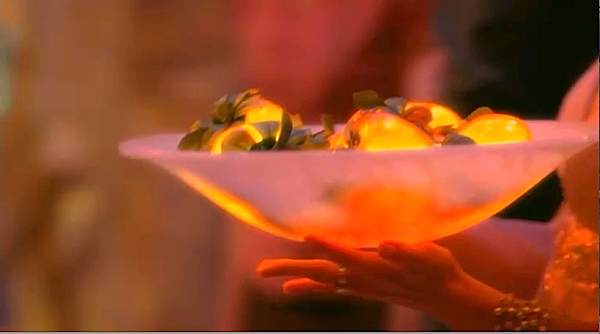 This bowl of fruit has been shown on more than one occasion in the season 4 promos. This will be a very important item for the story line.  Even the ground where the trees are growing seem to have a power and it looks like that ground is the portal between the worlds. 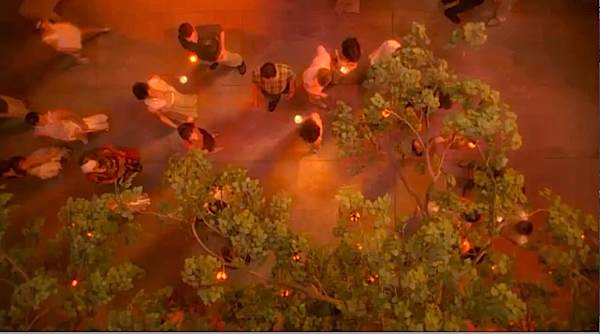 The ground of the Fae World is shown in the screen cap above. There is a light that starts to shine through and we can see it growing. 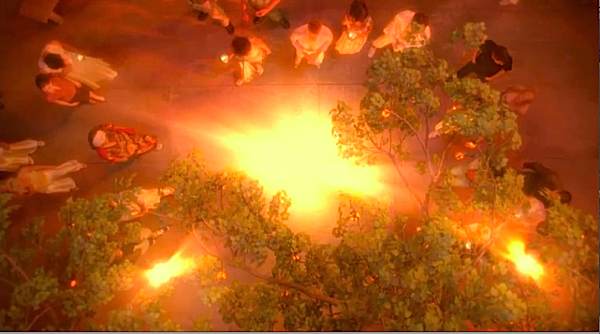 This seems to be the portal arrival into FaeLand. In the season 3 finale we see Sookie and Claudine zap away Bon Temps. Looks like we see the other side of the portal in the season 4 premiere. 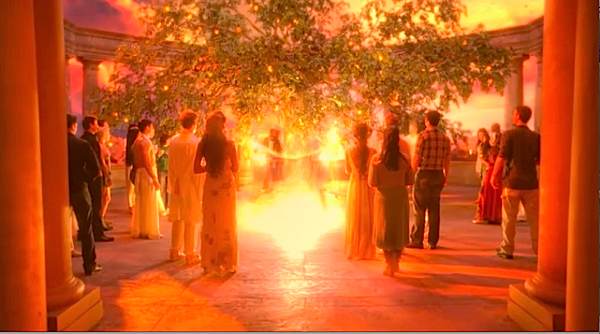 We see Sookie Stackhouse and her fairy godmother Claudine coming through the portal into Fae World. (they can be seen in the image above within the light) 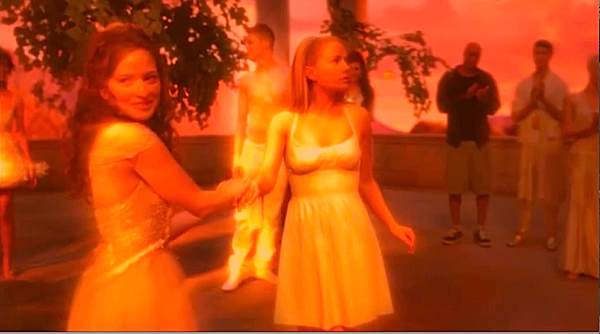 Another odd thing I noticed was how the others that are already present seem to stop and applause as a welcome to the new comers. (almost like a so glad you made it through-perhaps there is a danger to travel this way) Sookie feels a bit nauseaus after getting there and Claudine tells her that it will pass. The speed of travel may have caused Sookie to feel the “motion sickness” . Claudine finally tells Sookie the big mystery -yes she is her fairy godmother.

Sookie seems a bit ticked with Claudine that she could have done more to keep her safe over the years.

We get a few more looks at the others that are already there. I noticed that the humans were wearing clothing from all times. I saw a man wearing a uniform with his name “Doug” almost as if he had been zapped while working. 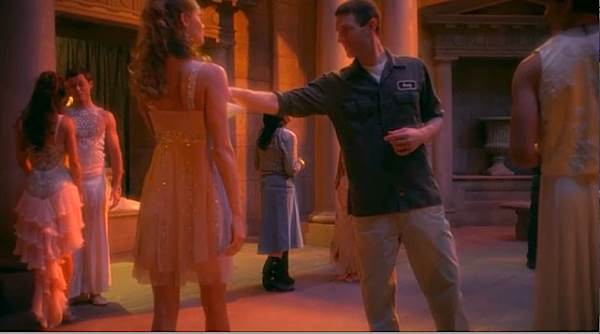 Another man is in a business suit. (to the right in the back) That style of suit seems to be from the 1980’s perhaps? 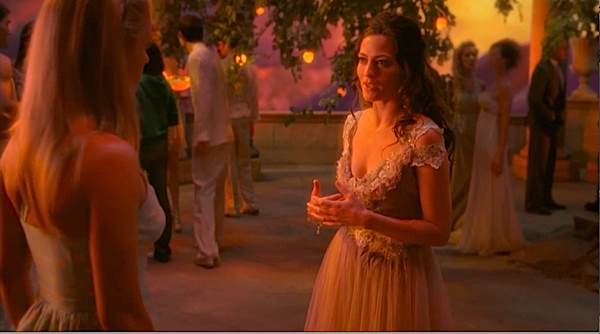 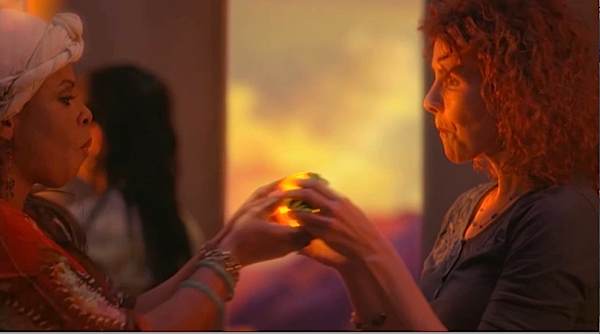 Barry the bellboy makes his appearance in FaeLand with his “fairy godmother”. (ok I want that necklace oh and yes a fairy godmother would be cool.) Barry states that he just got there and how great it was to be somewhere where they are not considered freaks (referring to his and Sookie’s gift of telepathy) 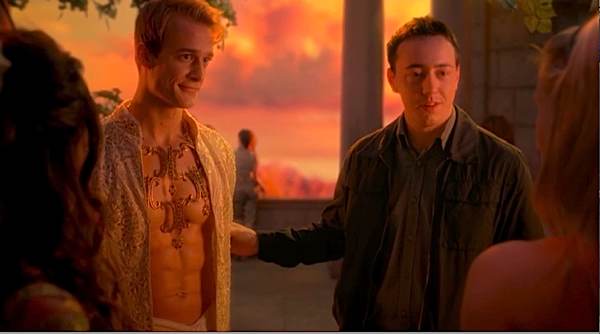 Another thing that is unusual is the effect that eating the fruit has on those who consume it. Seems to be very intoxicating almost addictive in nature.  Sookie at first is very leary of eating the fruit and tries to tell Barry not to taste it but too late! He is shown chowing down on the glowy fruit. 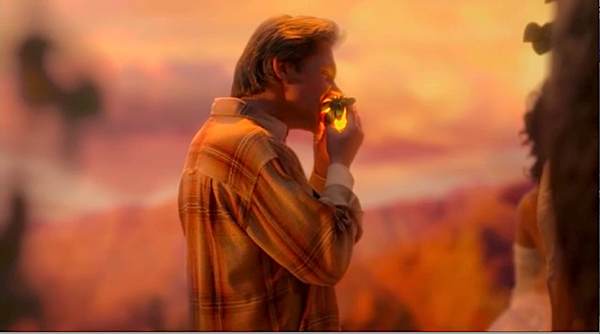 Sookie sees someone who looks very familiar to her (screen cap above)  and the motion he makes of picking the glowy fruit from the tree brings back a memory of her and her grandfather Earl Stackhouse. We see a flashback scene of Sookie as a child with Earl and he gives her the apple. 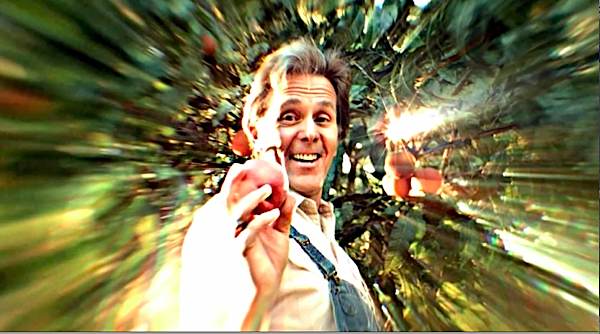 When Sookie speaks to him he seems very surprised how much she has grown. Sookie states that it had been 20 years! But for Earl it was only a short time ago. The way Earl says the fruit is ripe for the picking makes me wonder do they think Sookie is now “ripe”? (and needs more training in her fae ways?)

Looks like the glowy fruit is a way the Fae can keep the humans wishing to stay there in FaeLand and it also has a way to slow time down. The humans there are from so many different times.  Do they automatically travel there when they die? Why are they being brought to FaeLand now? Are the Fae worried about the vampires now that the existence of fairys is known to the supes? Are they bringing in them to FaeLand for protection (or are they building up an army?). Why was Sookie brought there now?

We saw in the season 3 finale that Bill’s purpose in Bon Temps had to do with the Queen wanting him to procure Sookie. Now that Sookie is no longer “his” is she at risk with the other supernaturals? We did see Eric Northman making a declaration of  “you are mine” to Sookie. (released 5/29/11)  This may be a way to protect Sookie. I believe Pam was trying to explain to Sookie why Eric would say something like that to her in the screen cap below: (from an earlier promo trailer)

Pam is shown in another trailer for season 4 warning Sookie that she needs to “belong to somebody or she won’t BE”. So yes I do believe Sookie needs to be aligned with someone as a protector.

There was a casting call for epsiode 4.01 for Queen Mab: (Shown below)

[QUEEN MAB] Late 30s – 40s, a powerful, regal, magnificent woman who commands a mysterious realm, and she’s filled with rage when her plans are thwarted… This part was cast by Rebecca Wisocky

Well now we have seen this “mysterious realm”. Just what are her plans? I believe she is trying to build up the forces in this realm perhaps to wage a “war”. Just who will they wage war against we don’t know yet. Waiting sucks but now we have a little taste to keep us going. Just don’t eat any glowy fruit!  Would love to hear from others on what do they see. I am still working on more caps from the video.