The new True Blood season 4 promo video has caused a huge stir among the fans. Waiting sucks even more now that we have seen some of our favorite blood suckers on screen again. Alexander Skarsgard as Eric Northman looks amazing this season! We see quite a few different styles to the Viking Vampire Sheriff. In the new video we see Eric making quite an entrance : Look no hands- 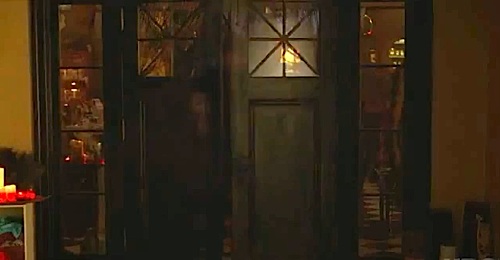 Photo Credit: ©2011 HBO Eric opens the door to Moon and Goddess Emporium with a gust of air!

That scene must precede the one we saw in the video “Invitation to the Set”:

Yes Eric Northman, Viking Vampire sheriff of area 5 is looking quite fierce entering the Moon and Goddess Emporium but something major happens that makes him look like this:

Yet another look for Eric from the same location. He is still looking strong but looks like he is trying to sweet talk his way  out of a situation perhaps? This screen cap is from the new promo:

In the new promo video released 5/12/11 we see Eric looking “fierce” again at Sookie’s home.  But still not his usual vamped up self.  Yes it is great to hear Eric tell Sookie “not a dream”. Sadly though, I believe this scene is a dream sequence AGAIN! But I still have hope for the season! The softer side of Eric does show again in the promo video (screen cap at end). I think that perhaps Bill is having a “nightmare”.

In the same promo video we see a “softer” Eric speaking with Sookie:

The softer vulnerable Eric was first seen in the waiting sucks video 1:

The new promo did show us more of that scene. Loved how Sookie threw that punch! Loved it even more hearing Eric ask WHY? 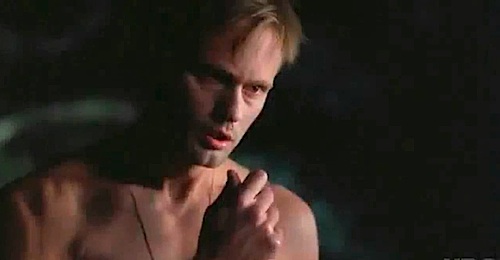 Yes waiting sucks! It sucks even more now that I have seen the new promo video! Love seeing Alexander as Eric and the many different looks we will see this season. It looks like Alexander Skarsgard will have a lot of scenes where he can show his acting chops. Can’t wait.