Time seems to go quicker for me when I try to solve some of the puzzles that Alan Ball has been setting for fans waiting for Season 4 of True Blood. Here are some more of my speculations on True Blood’s fourth season. Thankfully the show will finally premiere on 6/26/11. The trailer videos, waiting sucks videos have teased fans but I still feel they also hold some important clues for fans. Here are some more of my guesses/observations based on the videos released to date by HBO.

Joe Manganiello who portrays Alcide appears in the “Invitation to the Set” trailer in the image above. It looks like he is on or close to Sookie’s property. Casting call for episode 4.01 has this: [ERNESTO] In his 40s, brusque and irritable, he’s a contractor installing a new deck in someone’s house, and he doesn’t want to get in any trouble with his foreman…4 lines, 2 scenes Could this be why Alcide is in Bon Temps? Perhaps Bill is paying to repair Sookie’s house which was still a mess for all of Season 3 after the Maenad mess of Season 2? Some of the spoiler images from Sookie’s home do show her home in a much better condition.

Another possibility is that Alcide’s crew is working on the major renovations to Bill’s home and office that was featured in the Waiting Sucks video #4 where we see a whole new office for Mr. Compton.  It does look like the doors in the image below show doors that open out to a deck.

Bill Compton’s revamped office. From invitation to the set video. Episode 4.04 per waiting sucks video 4. Doors open out to a deck/balcony.

On the topic of Mr. Bill Compton and why he is in that new office. Could he also be holding a higher office in the vampire hierarchy. It might be possible that he still holds the sheriff of Area 2 positiion. He was offered that position  by King Russell Edginton in Season 3 in exchange for information on Queen Sophie Anne LeClerq. With the King “cemented” by Eric and Bill in the Season 3 finale, Bill  could still be acting in that Sheriff role?  One question I also wonder if we will have an answer for is whether  Bill  will have to answer for trying to “cement” Eric? Without a Magister to adjudicate the Tribunal perhaps Nan Flanigan will be involved.  Yes I know more questions than answers for now.

There was a casting call for episode 4.05 for a  GUARD Male, 30s, one of Bill’s (Stephen Moyer) guards, he is frustrated by a video game on his cellphone…1 line, 1 scene . Why would Bill have a guard? Is he the one being protected? Or is he the one in trouble? In the same casting call there is a call for: SHERIFF 1 AND SHERIFF 2] 30s – 40s, male, these snickering vampire sheriffs, under Bill’s purview, disagree with his decision regarding a witch’s fate…1 line, 1 scene Is this perhaps a flashback scene? Wonder which witch is the one receiving his decision?

There was also a Casting call for True Blood’s episode 4.04 [CAROLINE BELLEFLEUR] In her 70s, Caucasian, formidable, refined, and beautifully dressed, she is Portia’s (Courtney Ford) grandmother who dislikes vampires but warms to Bill’s charm. Guest Star. The character of Portia in the books did have a brief romantic involvement with Mr. Compton. They had one date I believe.  (Perhaps Bill Compton tries dating Portia in season 4 on True Blood to make Sookie jealous?)

In the “Invitation to the Set” video we see a flashback scene with a priest.  In the prior blog entry “Deeper Clues” I wrote:

There are women who appear to be praying/chanting. I believe this scene is for the flashback scene that is mentioned in casting call for episode 4.05 which called for a “Head priest” seen in a flashback to 1610, he instigates the burning of a witch at a medieval church, and he clearly takes pleasure in describing the procedure. The images show a flash of light perhaps he is performing an exorcism and also burning the witch? Marnie’s character is supposed to be possessed by the spirit of a powerful witch. Could this flash back be showing fans where that very same powerful witch met her demise

The screen cap below seems to show that action:

A head priest for the scene set in  1610. It made me wonder why where they so specific on the time in the casting call? Well the Spanish Inquisition was going on during that time. (in Spain during 1609-10 – The Spanish Inquisition expels the Moors, Spain’s most learned & faithful subjects, thus weakening Spain) In True Blood’s  Season 1 episode 10, during the tribunal scene the Magister mentioned being around for that time frame. He specifically mentions being trained in the Inquisition. The video below shows the scene: at the time mark 1:29 he says “Do you question my authority? I am the magister. I was trained in the Inquisition and I am the adjudicator for every vampire territory in North America! As the humans say, the humans you love more than your own kind, back your sh@t down! (ok..one of my favorite lines ever!) Is there a possiblity that fans may once again see the Magister in that flashback scene? Could he have been responsible in part for the Vampire Priest that was shown in casting call?

The whole question of having Marnie being possessed by the spirit of a powerful witch started me on that idea. Why would a powerful witch (who was probably the one being exorcised/put to death by the priests in 1610) come to Lousiana? Was she haunting the Magister? Was the spirit of the necromancer called by King Russell to “reanimate” his beloved Talbot?  Perhaps Russell also wanted her to harm Eric? (since he was the one who killed Talbot) It could all just be coincidence but I found it odd that the time frame of 1610 was used and shown in the casting call for a scene from what is probably the Inquisition. There is rarely just a coincidence in Mr. Ball’s world. The Magister boasted of having been trained in the Inquistion. There is a tie in somewhere! (still looking).

And yes I know I did write that perhaps Bill Compton had a role in having Eric visit the Moon and Goddess Emporium and perhaps setting him up to be “spellbound”. Bill could still be wishing Eric out of the way since he has had Sookie’s blood?  Perhaps Mr. Compton is also  still mad at Eric for his role in having Sookie find out the  true purpose for being  in Bon Temps. His “cementing” attempt was not successful since Eric was able to call Pam to rescue him. (Bill had mimicked Eric’s voice and called an assassin to kill Pam but the assassin was instead killed by Pam).  Bill might also save his hide by reminding Eric that he only had Russell’s fangs and he did not actually have the King meet his final death (he could hold that over Eric’s head).

Another possible tie in might also be with the “creepy dolls” that were shown in the Season 3 finale at Hoyt and Jessica’s house. blog entry here: where I discuss how it looked like that doll was shown in the Waiting Sucks video # 6 with Terry and Arlene. Perhaps the doll that was left behind in the home Hoyt belonged to  a witch and somehow the doll is possessed by the powerful spirit? There is a flashback scene called for in season 4 episode 4.06 calling for a character of Mavis set in the 1930’s. Perhaps Mavis was a witch or owned the home and the doll holds a spirit?

I know I’m being picky here but in the first “Waiting Sucks” video featuring Eric (shirtless and disheveled on the side of the road) why does the voice setting up the action say “a blonde man” instead of a “blonde vampire”? I know picky picky. Just wonder if Alan Ball is using the necromancer term to the fullest extent. (mentioned in the  moments and also in the deeper clues entry )

One question I do hope is answered in another teaser video is “where is Steve Newlin”?  In the video that was shown at Paley Fest a group of protestors are giving Hoyt a rough time and calling him a “fangbanger”. In that video one of the protestors outside of Fangtasia is holding up a sign with that same question. 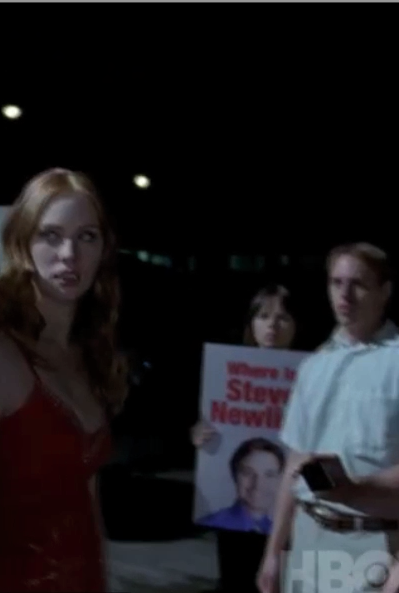 In the second Waiting Sucks video we see Sam and Luna. Luna says her ex is a were wolf. Could this ex be a female? I noticed in  the casting call for  episode 4.1  the character of :NAOMI In her 20s, Asian-American, she’s a fierce fighter who participates in underground cage matches for money. Outside the arena, however, she has a loving relationship with one of her female opponents…RECURRING – Actress must have martial arts or fighting experience. It was just something in the way Luna said her ex and how Sam said “someone like me”. Did he mean a shifter or the fact that he was a man?

Invitation to the Set screen cap- The pulleys behind Jim look like the ones for Sookies home.

Looks like Jim Parrack was seated on the other side of the set that is used for “Sookie’s home” including her bedroom and BATHROOM.  Inside True Blood blog posted an image that showed what looks like those same pulleys. (image below) 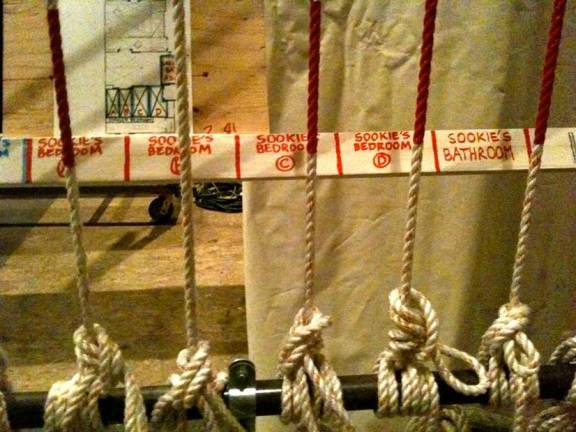 Hopefully soon we will get another trailer/teaser/whatever True Blood video! Love to hear what other fans see in these images or if they have other ideas. UPDATE: Gianna Sobol posted on the Inside True Blood blog that the set was closed for filming (nudity?) Guess we know what scene this is for!! 4.08! Spellbound!