Counting down to the new season of True Blood has been a way for fans to lessen the pain of waiting. HBO has been teasing True Blood fans with “waiting sucks” videos and the Invitation to the Set video.  The montage trailer video which aired before the “Game of Thrones” season premiere last week included scenes from several of HBO shows and of course True Blood was included. The screen cap above shows Sookie at the season 3 finale right before she takes Claudine’s hand. The caption of “Moments of Transcendence” refers to what is up ahead perhaps for the show.

Again trying to pass the time of waiting by taking another look at the images from the “moments” trailer and yes I did see some season 4 action. SPOILER ALERTS…..Ok if you don’t want potential spoiling don’t read on or look at the images. Also–this is my conjecture based on the images, what I see in them combined with the casting calls that have been out for Season 4. I could be very wrong but here’s what I see. I’m not intentionally swaying my views towards any particular character. It is just how I see it.

The next “Moment” shows as Moment of Revival. The next set of images in the video are of the heart wrenching scene from Season 3 where Sookie is in the hospital room and Bill Compton is shown with bloody tears streaming down his face. Bill helped Sookie heal from his attack by supplying his blood in an IV tube.  During her “coma” Sookie had a glimpse into a very interesting world and met Claudine for the first time.

The next set of images for True Blood in the Moments video show as “Moments of Intimacy” and  are of the infamous “Kiss” scene between Eric and Sookie that took place in Season 3. The first “real” kiss that was not just a daydream.

After the “kiss” scene, the moments video shows “Moment of Truth” and  we see Sookie using her “microwave” hands ie using energy to keep from being taken to King Russel’s mansion:

The next set of images related to True Blood in the moments video show the caption of : “New Season True Blood. The first set are of Sookie in an very ethereal setting.  The action seems to show fans just where Sookie goes to in that flash of light. So yes I do believe this is Alan Ball’s vision of Fae World.

The next character that appears is Eric Northman. I believe this action takes place at the Witches location “Moon and Goddess Emporium”. He is wearing the same clothing and is standing in the same location as the action that is shown in the “invitation to the set” video when it looks like he is meeting the witch “Hallow”. This screen caps appears to capture what is the action right after the witch casts her spell on Eric:

Eric’s character appears changed quite visibly in the image above from the image below (which was shown in the “Invitation to the Set” video. What could cause him to go from the visibly fierce and angry vampire to the image above? The spell is the cause of that I believe. Something else has also been bothering me about the images that show Eric Northman while “Spellbound” also show quite a drastic difference in his coloring. I have been wondering if also when the spell is cast since Hallow’s character is supposed to be a necromancer could not she also raise the undead? (I mentioned a bit of this in the prior post titled “Deeper clues”) Eric’s coloring/makeup is also quite different in the  first “waiting sucks” video. Yes waiting sucks but guessing helps pass the time.

Invitation to the Set screen Cap. Eric Northman at the "Moon and Godess" store-confronting Hallow perhaps.

The last character we see in the “Moments” video is that of Jason Stackhouse. The images are from the same action that was shown to fans in the third  “Waiting Sucks” video where we first saw Jason tied up in the Hotshot storage shed. This action I feel is for True Blood’s episode  4.03 titled “If you love me, why am I dyin?” Jason can be heard saying to Crystal something like “I’m dying”. Seems to fit with what is being shown in the images.

Moments screen cap Season 4 image possibly for episode 4.03 "if you love me, why am I dyin"

It is hard to see Jason this way. He looks like he has suffered many attacks (bite marks and deep cuts can be seen on his body). For fans of the book series upon which the show is based this will be familar. The fourth book of the series does include some of this story line so it is interesting to see that Alan Ball may be going down this path for Jason. I still believe Alan knew he was going to do this since season 1. Jason was shown wearing a hat that gave a bit of a possible hint to fans (or just another coincidence..but I think it was a nod all along to the story line). The image is from True Blood’s first season -episode 1.08: 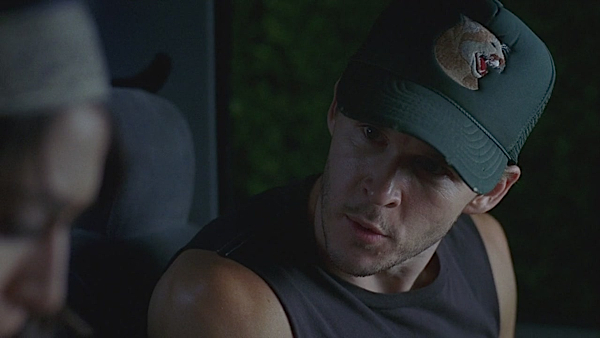 True Blood episode 1.08 Jason is shown wearing a panther on his hat

The gallery below contains the screen caps from the “Moments” trailer video. I have a few more notes to finalize and am also working on a chart that links the images with their possible season 4 episodes.